The twentieth studio album from the elder statesmen of rock and their sixth album with guitarist Steve Morse who has now been in the band for twenty-two years, almost half of Purple’s astonishing and varied forty-nine year career.

Anyone still wishing that Deep Purple would make another ‘In Rock’ or ‘Machine Head’ needs to get their compass fixed, as this band have been travelling in an entire different direction for the past two decades on an expedition that knows no boundaries.

Deep Purple have never made the same album twice. As with every Purple album, ‘InFinite’ is a work of art that keeps on giving with each repeated listen.

Always keen to explore and to flavour new territories, the band have once again made an album that will be hotly debated amongst connoisseur fans yet bring in a new legion of younger fans who see the band in a completely different light.

Purple may well be travelling in their advancing twilight years but with that comes a wisdom and maturity that younger bands can only marvel at.

Produced by Bob Ezrin, the clarity and musicianship is top notch. Don Airey’s Hammond work is more in a progressive vein and direct while Steve Morse has a unique fluid audacity that not only sets this line-up of Purple apart from their previous incarnations but also from any other rock band, given their own inimitable sound.

Drummer Ian Paice suffered a minor stroke last year but shows no signs of it while continuing to be the beat master who gives the band the room to manoeuvre while steering the ship through the ice and snow.

Roger Glover and Ian Gillan co-wrote the worldly lyrical content that stretches the mind into a vortex of imagination.

Ian Gillan recently said that he’s become an angry man again and that is evident on the leading track, ‘Time For Bedlam’, which includes the thought provoking lyrics:

“Right from the ashes of life I learned to behave
What to believe, what not to say, from cradle to grave
Like a good little slave
Sucking my milk from the venomous tit of the state
This clearly designed to suppress every thought of escape
I surrender to fate.”

Ian Gillan does his best Matt Monro impersonation as he croons, complete with expletives, on the swinging jazz number ‘All I Got Is You’.

Gillan later gets poetic with ‘On Top Of The World’ with his skyscraping antics.

A real highlight is ‘The Surprising’, an explorative wanderlust slow number with a heavy midsection which will soon become a bonafide classic. A few gritty hard jams include ‘Hip Boots’ and ‘Get Me Outta Here’ and Purple have fun on the barroom thrill of ‘One Night In Vegas’ and the poppy ‘Johnny’s Band’.

‘Birds Of Prey’ is an intricate song featuring soaring guitar work from Steve Morse and there’s a surprise tucked onto the end in the form of a cover version of The Doors’ ‘Roadhouse Blues’, a song that has been covered by numerous acts, but Purple have done a laid back version here complete with harmonica from Gillan.

A challenging album for the casual listener but a rewarding one for the open minded.

A strong body of work from a band that refuses to rest on its laurels. 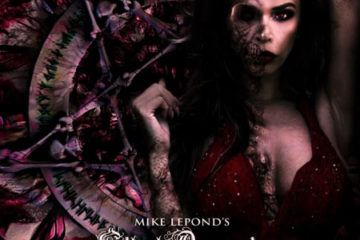