British melodic hard rock icons Magnum had a blinding 2018 that saw their twentieth studio album, ‘Lost On The Road To Eternity’, deliver their best chart positions for over three decades.

MetalTalk’s Brian Boyle said about ‘Lost On The Road To Eternity’ in his nine pints out of ten review: “I have to say I’ve never been let down or underwhelmed by a Magnum album. Obviously some are superior to others but each one has left it’s mark, and this sumptuous banquet of tunes will leave you permanently branded.”

It absolutely did, entering the UK Album Chart at a smashing number fifteen and the UK Indie Album Chart at an astonishing number one. Amazon sold out of the new album on the first day of release and it was the twelfth best selling Amazon product in all categories that day.

Magnum’s best ever Album Chart position was number five in 1988 for ‘Wings Of Heaven’, followed by number nine for 1990s ‘Goodnight L.A.’.

When Bob Catley and Tony Clarkin appeared on MetalTalk’s You Spin Me Round radio show almost exactly one year ago and talked through every track on the album, the show trended in Mixcloud at 64.

It is unheard of for a rock or Metal show to trend on Mixcloud and compete with the rappers and hip-hop shows but these overlords of melodic Metal achieved it and it ranks up there with their top career highlights.

Magnum proved that they are still a ridiculously hard act to follow in the live arena too by embarking on a mammoth 2018 European and UK tour which was heralded as one of last year’s highlights and now, one day short of a year since ‘Lost On The Road To Eternity’ was released, you will have the chance to relive Magnum’s glorious 2018 once again.

As Brian Boyle liked ‘Lost On The Road To Eternity’ so much, we nominated him to review ‘Live At The Symphony Hall’ as well and this time it was a ten pint review, with Brian pointing out: “they collectively assembled a performance of colossal proportions” and “this is the strongest line-up of their 47-year-long career so far.”

It’s a very rare thing for a live album to outdo it’s studio predecessor but this is what has happened here and we have a huge belief that the chart positions of January 25th 2019 will reflect this.

Can Magnum outdo last year’s chart positions? ‘Live At The Symphony Hall’ is out on Friday 18th January.

‘Live At The Symphony Hall’ is Magnum’s tenth live album and ranks alongside ‘Wings Of Heaven Live’ as their very best.

‘Wings Of Heaven Live’ was recently reissued by SPV/Steamhammer on vinyl and it’s well worth revisiting.

The album starts with the collossal ‘When We Were Younger’, as does ‘Live At The Symphony Hall’, and includes several cuts not on the new album including ‘Back Street Kid’, ‘Vigilante’, ‘Wild Swan’, ‘Pray For The Day’, ‘Different Worlds’ and several more.

The album was recorded on the ‘Wings Of Heaven Live’ UK tour at Inverness Ironworks, Glasgow Garage, Cambridge Junction, Birmingham Academy and other UK venues in November 2007 and is dedicated to Kex Gorin, Magnum’s original drummer, who died on 21st December 2007.

MAGNUM'S BOB AND TONY TALK 'LIVE AT THE SYMPHONY HALL' 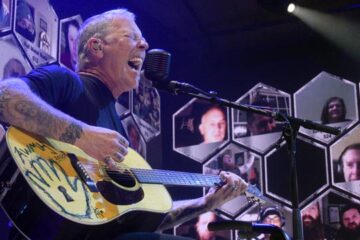