Tragic news rocked the music world on 20 April 2021, when it was announced that songwriter extraordinaire Jim Steinman had passed away at the age of 73. His compositions have formed the soundtrack to countless millions of music fans since the 1977 release of his collaboration with Meat Loaf: ‘Bat Out Of Hell’.

While his music never failed to deliver in scale and grandiosity, it is Steinman’s lyrics which have stamped their mark in history over the last 45 years. Titanic emotions such as love, angst, longing, passion and lust are the core of his songs, usually delivered via one of his two key muses, Bonnie Tyler, or Meat Loaf.

There is no songwriter who gets closer to your emotional core or pulls your heartstrings tighter, and he was able to capture a feeling and encapsulate it in a song like nobody else.

‘You Took The Words Right Out Of My Mouth’ illustrates this, with its sizzling-hot spoken-word intro that just drips with lust and longing.

“On a hot summer night would you offer your throat to the wolf with the red roses?” The lyrics are so visual and visceral, it sends chills down my spine just thinking about it.

It is time to remember Steinman’s genius and Rock out to a few of his greatest moments, plus a couple of hidden gems that you may – or may not – have had on heavy repeat for most of your musical life. I know I certainly have. Sit back, get those swanky new Bluetooth headphones on full volume and immerse yourself in the gothic, over the top splendour of one of Rock’s greatest songwriters: Mr Jim Steinman.

Bat Out Of Hell

“The sirens are screaming, and the fires are howling way down in the valley tonight. There’s a man in the shadows with a gun in his eye and a blade shining oh so bright.”

The original and probably still the best. This song has it all. Like Queen’s Bohemian Rhapsody, it breaks all the rules and defies all expectations.

The album spent over 500 weeks on the UK album chart, for good reason. It is almost ten minutes of Rock ‘N’ Roll perfection. There will never be anything like it again. A curse on all those DJ’s who cut it short.

“Every night I grab some money and I go down to the bar. I got my buddies and a beer, I got a dream, I need a car.

“You got me begging on my knees, c’mon and throw the dog a bone. A man he doesn’t live by Rock ‘N’ Roll and brew alone.”

The ‘Dead Ringer’ album may not have had ‘Bat Out Of Hell’s’ commercial success, but it had another weapon in its arsenal. Cher.

And wow does she nail it on this classic duet, immortalised by this line she delivers flawlessly: “I’m looking for anonymous and fleeting satisfaction. I want to tell my daddy I’ll be missing in action.”

The video is a wonderful energising and visual time capsule of when the world was fun, i.e., the 1980’s, and features Meat Loaf at his theatrical best!

Total Eclipse of the Heart

“Once upon a time I was falling in love. But now I’m only falling apart. There’s nothing I can do, a total eclipse of the heart.

“Once upon a time there was light in my life. But now there’s only love in the dark. Nothing I can say, a total eclipse of the heart.”

‘Total Eclipse Of The Heart’, almost 40 years after its release, remains the definitive power ballad and a karaoke classic. Jim Steinman apparently stated it was written to be a vampire love song about darkness, the power of darkness and love’s place in the dark.

Is it a cliche to include it here?

Yes, but it really is just the pure essence of Jim Steinman. It is irresistible, over the top and has the emotional pull of a black hole, sucking in all your feelings and leaving you raw and needing a cigarette after listening to it.

Over the top, utterly epic rating: 13/10
Emotional overload rating: Off the scale.

I’m Gonna Love Her For Both Of Us

“I can’t stand to see it no more. The way you’re living with a goddess, but you treat her like a slave.

“And you can’t hold her back any more. She’s like a dreamer in a dungeon, or an angel in a cave.”

Meat Loaf’s 1981 album Dead Ringer is a true hidden gem. Permanently overshadowed by the all-conquering ‘Bat Out Of Hell’, every track on ‘Dead Ringer’ was penned by Jim Steinman and it has a glorious selection of over-the-top triple hanky weepies, including the appropriately titled ‘Read ‘Em And Weep’.

‘I’m Gonna Love Her For Both Of Us’ is seven minutes of delirious emotional overload.

Meat Loaf’s impassioned overwrought delivery fits the desperate heartfelt lyrics to perfection and the bombastic arrangement is simply the cherry on the top of a spectacularly epic rock cake.

Instead, Jim Steinman wrote, produced and sang on ‘Bad For Good’, his only solo record.

Steinman’s voice is no match for the ‘Loaf, but what it lacks in power it makes up for in feeling. ‘Bad For Good’ takes you on a glorious breathless journey that rises and falls like waves in a storm, leaving you emotionally exhausted but ready for more.

Where else can you find a lyric as emotive as: “I want to wrap myself around you like a winter skin.”

The video is a work of art in itself too.

I Would Do Anything For Love

“Somedays I just pray to the God of Sex and Drums and Rock ‘N Roll.”

That piano intro. The fact that the proper version is 12 minutes long.

The fact that you surely can’t repeat the success of ‘Bat Out Of Hell’ and yet here it is, in many ways surpassing it for sheer epic grandiosity.

I can not leave this song off the list, although I know there are other epic Steinman moments such as Air Supply’s ‘Making Love Out Of Nothing At All’.

But what a song. It is a masterpiece that builds and builds until it suddenly becomes a duet; and the moment Lorraine Crosby asks “Will you cater to every fantasy I got? Will you hose me down with holy water if I get too hot? (HOT),” most listeners will need a cold shower.

There has been nothing like it before, or after. A Rock classic in every sense of the word.

Thank you, Jim, you were one of the best and your music will live on and on.

Jim Steinman / Songwriter with Meat Loaf and more, dies at 73

Jim Steinman / Songwriter with Meat Loaf and more, dies at 73 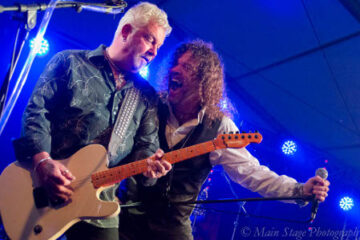