Leaves’ Eyes / A refreshing throwback to when albums were albums

Following the themes of Leif Erikssons discovery of America and the life of Norway’s first king, which were covered in the albums ‘Vinland Saga’ and ‘King of Kings’ respectively, Leaves’ Eyes return to their epic concept story telling style, this time correcting the oft-repeated Viking saga tales.

Vocalist Alexander Krull told us: “Some TV dramas or blockbusters make me smirk when I see the Viking Sagas turned upside down. We don’t mess around in mythology!”

Once again, Krull has taken responsibility for the album’s conception and lyrics, and just like ‘too much ale and a man’s heart is laid open for all to see’, this collection of songs around The Viking’s last battle is pieced together to make a rip-roaring and enthusiastically brilliant album. 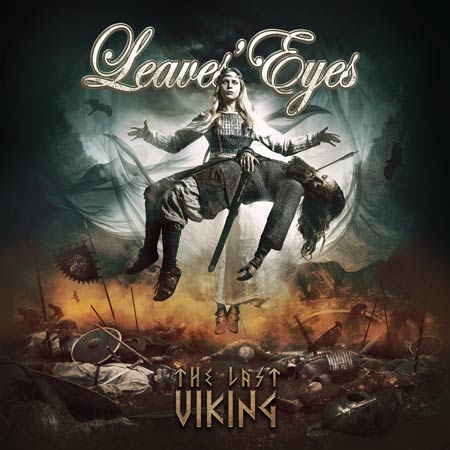 “Commence Death” Krull growls, as the atmospheric instrumental opening track ‘Death Of A King’ sets the scene. The last Viking battle was near Stamford Bridge, in 1066 and here we find Norway’s King Harald III, known as ‘The Hard Ruler’, dying watching his life flash before his eyes.

‘Chain Of The Golden Horn’ rips in and here we find Leaves’ Eyes doing what they do best. Uptempo storming rhythms, with great lyrical melodies from the superb Elina Siirala which are interspersed with Krull’s growling majesty alongside thundering guitar and bass notes. The song tells of Harald’s dangerous escape from Byzantium, where a heavy iron chain was hidden in the Bosporus waters to wreck hostile ships.

The Symphonic Metal mastery of ‘War Of Kings’ follows. If the ‘Sign Of The Dragonhead’ album was Elina Siirala being bedded into the band, now we can already feel that she has totally embraced her role and ‘War Of Kings’ is superb example of this.

A classic of Symphonic Metal, this track has the great guitar work of both Thorsten Bauer (who covers Bass too) and Micki Richter, while Krull growls the nicely repetitive song title, leaving Siirala to weave her soprano magic over the top.

The wonderfully heavy opening of ‘Black Butterfly’, sees Siirala joined by the elegant Clémentine Delauney. This track is the first of three which first appeared on the 2019 EP ‘Black Butterfly’ and this updated new version is now something special. “Remember the time your heart was mine? The warlike Norse King has gained his dream. How long his secret love had been.”

In ‘Serpents And Dragons’ we have an uptempo riff based track telling the story of the Viking King’s attempt to take the Danish title with a massive longship army. As a slice of music, it is all you want in a Symphonic Metal song. The middle with vocal and guitar harmonies are special and this is sure to be an epic live track to witness.

‘Dark Love Empress’ opens with a dark, romantic piano, before sliding into a wonderful choir and string riff, before the Rock Opera affect takes over. The song tells of the Kings imprisonment in a Byzantine dungeon, as he refuses to join the string of lovers collected by the vengeful empress Zoë.

In songs such as ‘Two Kings One Realm’, we have thundering drums which back the atmospheric Krull voices, leaving Siirala to layer a gloriously simple and hypnotic vocal over the top. ‘Varangians’ is a splendid Celtic style Rocker and ‘Night Of The Ravens’ is another uptempo track of note.

Penultimate track ‘Break Into The Sky Of Aeon’ is a pick, wonderfully showcasing all the elements which we come to expect from Leaves’ Eyes.

This, of course, leads into the epic finale of ‘The Last Viking’. Siirala sings “Where arrow-cloud is loud singing, foemen feel its mortal bite. His deadly sword is still swinging, high in the air.” The title track is an epic ten minutes long and brings the story nicely to a close, as you can almost feel the soul of the departed King slide away into the atmosphere as the track and album fades out.

Often times it is not numbers that wins the victory, but those who fare forward with the most vigor.

Krull has completed what he does best and presented a diverse and stylish collection of songs as a concept album, which tells the story of The Last Viking wonderfully.

Backed by an impressive band and led by the wonderfully talented Elina Siirala who really shines here, the album is great and if you are prepared to spend your time immersing yourself in this, then the rewards are numerous.

Given the current style of people dipping in and out of albums just by listening to occasional track, this is a refreshing throwback to when albums were albums and consumed accordingly.

While the English King Harold may have defeated the invading Norwegian force led by King Harald Hardrada and the English king’s brother Tostig Godwinson, the victory was short lived as his army was defeated by the Normans at Hastings less than three weeks later.

Leaves’ Eyes / A refreshing throwback to when albums were albums