There was an army marching around Kentish Town tonight, and what a mighty force they were. The streets littered with people wearing their very own uniform: black and white make up and four little letters on every t-shirt. That’s right, the KISS army were here. 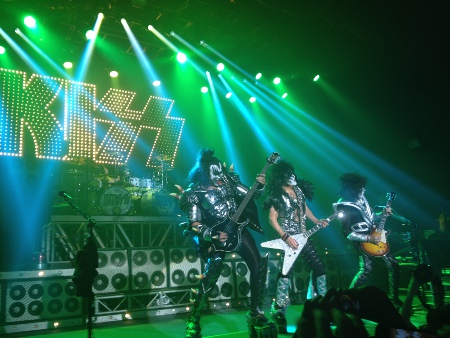 This was a special show in a tiny venue and the hottest ticket of the year (certainly in the hottest venue), even at the hefty price of £57. But as it was a charity gig, with proceeds going to Help For Heroes, so you could forgive that part.

From behind the curtain, the announcement came: “You want the best, you got the best, the hottest band in the world. KISS.” And as the curtain dropped the unmistakable opening to ‘Detroit Rock City’ played, and everybody certainly got up and moved their feet.

This was quickly followed by the live debut of new track ‘Hell or Hallelujah’ from their forthcoming ‘Monster’ album. A bit odd to play it so early in the set, but it was easy enough to learn the lyrics and soon everyone was joining in. If this is an indication of what their 20th studio album has to offer, then I expect a good classic rock album, with no surprises and nothing ground breaking, but fun nonetheless.

After that came a sing-off, using the lights to direct each side of the venue, before your feet started stomping to the beat of ‘Deuce’. Kiss are a world renowned band and put on spectacular arena and stadium shows, so to see them put that energy into a venue so small is outstanding, and they certainly bought along a heavy artillery of pyros for their 4th July celebrations.

The encore was perfect, consisting of ‘Crazy Crazy Nights’, ‘Lick It Up’ and climaxing with ‘Rock And Roll All Nite’ accompanied by so many confetti cannons that it felt like you were in a giant KISS snowglobe.

And as the house lights came up and we were all singing along to ‘God Gave Rock ‘n’ Roll To You’, a few of us looked at the floor in front of the stage and noticed it looked like it had snowed so we did what any other self-respecting adults would: jumped in and start a spontaneous snowball type fight with it all.

We wanted the best, and whereas they might not be the most talented and technically genius band on the circuit, we got the best gig of the year for me. Quite simply because it was just so much fun and I can’t stop smiling – two days on!