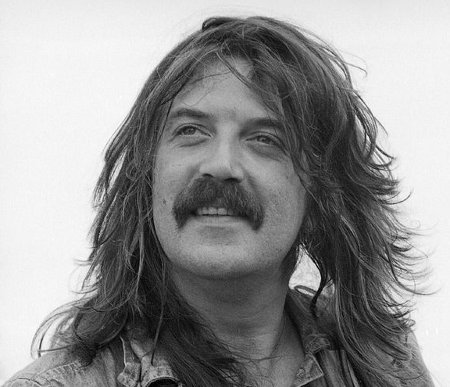 Born in Leicester, England, Jon Lord started to play classical piano from the age of five being influenced by Bach, Medieval music and the English tradition of Elgar. At 18 years of age Lord moved to London, originally intending to take up an acting career.

To earn some money in his spare time Lord joined the jazz ensemble Bill Ashton Combo before going on join other bands such as the Artwoods and the Flower Pot Men. It was when he formed the Santa Barbara Machine Head (Which featured Art Wood on vocals and Ronnie Wood on guitar) that Lord found his style of playing the Hammond organ in a heavy blues direction with plenty of distortion. A sound for which Lord would later become world famous for.

During his time as a session player Lord would also provide the keyboards for The Kinks hit ‘You Really Got Me’ in 1964.

Following a suggestion from his room mate Chris Curtis of the Searchers, Jon Lord met up with manager Tony Edwards in 1967 and met Ritchie Blackmore for the first time to form a band that was originally to be called Roundabout along with Ian Paice on drums and Rod Evans, vocals and Nick Simper on bass. With a name change to Deep Purple, the band were influenced by American rockers Vanilla Fudge whom Lord had seen in concert the same year. They made their debut, ‘Shades Of Deep Purple’, and a cover of the Joe South song ‘Hush’ was a massive hit Stateside.

This line up made three albums with the third self titled album ‘Deep Purple’ featuring the track ‘April’ which had a classical introduction written by Lord.

In 1969 Ian Gillan and Roger Glover replaced Evans and Simper in the band and the classic Mk II line up was formed. However the first major task for the new boys was not an easy one as much against the rest of the band’s wishes Deep Purple were to perform at the Royal Albert Hall London with the Royal Philharmonic Orchestra to perform a piece written by Jon Lord.

This caused quite a stir at the time with classical loving members of the public being offended that their music was being hijacked by a group of long haired beatniks.

The event was a success and gave Jon Lord and the band some much needed publicity although a certain Blackmore wasn’t too happy that Lord was getting all the spotlight and was seen as the main focus of the band.

In 1970 ‘Deep Purple… In Rock’ was released and saw the band move in a much more progressive hard rock direction and paved the way for the band to become one of the biggest heavy rock bands in the word along with Led Zeppelin and Black Sabbath.

‘…In Rock’ featured the distorted Hammond sounds of Lord and the fast demonic anger of Blackmore’s guitar with screaming vocals from Gillan with thunderbolting rhythm from Glover and Paice and included the classics ‘Speed King’ and ‘Child In Time’ which had an eerie intro written by Jon Lord although it was cheekily borrowed from a song called ‘Bombay Calling’ by the folk band It’s A Beautiful Day who would in return steal Purple’s ‘Wring That Neck’ for their own use. The album was a massive hit and really opened them up to the European market.

The Mk II line-up would make three more albums including the experimental ‘Fireball’ in 71 and for many the ultimate classic with ‘Machine Head’ in 72 which featured ‘Highway Star’ and Deep Purple’s most popular song ‘Smoke On The Water’ written after the band witnessed a fire at a Frank Zappa concert whilst recording the album in Montreux, Switzerland.

Deep Purple would also release one of the first milestone live albums with ‘Made In Japan’ which showcased the improvisations the band were famously were becoming known for in the live setting.

Although Ian Gillan left the band and Roger Glover quickly followed suit there was no let up in the rolling of the Deep Purple machine with the new boys, a young David Coverdale on vocals and from Trapeze, Glenn Hughes on bass and vocals.

With the release of ‘Burn’ in 1974, Deep Purple were one of the biggest grossing rock bands which saw the band fly around the world in their own private jet and headline the Californian Jam in front of a reported 250,000 people on a bill that also included ELP and Black Sabbath amongst many others.

Later that year they would release another studio album in ‘Stormbringer’, the last to feature Blackmore who was unhappy in the new funky soul direction the band was moving into.

Whilst all this success was going on Jon Lord still found time to work on classical projects including ‘Gemini Suite’, ‘Windows’ and ‘Sarabande’ as well as an album with Tony Ashton with ‘Last Of The Big Bands’ and a film soundtrack with ‘The Last Rebel’.

There was one more album with Deep Purple in ‘Come Taste The Band’ in 1975 with new American guitarist Tommy Bolin. After a disastrous Asian tour the band finally imploded after a gig in Liverpool in 76 and Ian Paice and Jon Lord agreed to call Deep Purple a day. The drugs, stress and hard touring had finally taken their toll.

However it didn’t take long for Jon Lord and Ian Paice to join forces again with Lord’s old buddy Tony Ashton to form the short lived Paice, Ashton, Lord – or PAL for short – to record one album ‘Malice In Wonderland’, A funky jazz affair which also featured Bernie Marsden on guitar.

Between 1978-84 Jon Lord joined former Purple singer David Coverdale in Whitesnake who at times also had Ian Paice in the band.

Although the band were popular having hit albums and singles, Jon Lord was unhappy at just being a hired gun and not having the room to express himself in his playing as he had in Purple. With Coverdale wanting the age group of the band under the forty age bracket Lord left the band.

Jon Lord also found time to record another solo album in 82 with ‘Before I Forget’.

In 1984 the world expressed surprise as one of the first ever reformations of a major rock band took place as it was announced that the classic Deep Purple Mk II line up of Gillan-Glover-Lord-Paice-Blackmore would record a new album and tour the world.

The resulting album, ‘Perfect Strangers’, didn’t set the world alight as before but was still regarded as a good solid rock album. The reformation gave Jon Lord the chance again to hammer away on the Hammond to the delight of many rock fans.

Although the reformed Deep Purple would take many twists and turns throughout the years with Gillan leaving and re-rejoining and Canadian Steve Morse replacing Blackmore, giving Purple yet another new dimension and this line up toured the world harder than ever before.

Jon Lord finally retired from Deep Purple in 2002 reportedly after having trouble after knee surgery, but Lord was also finding life on the road a chore and was very saddened to be away on tour when his best friend Tony Ashton sadly passed away.

Jon Lord played his last official gig with Deep Purple in Ipswich 2002 but has guested with the band on many occasions since then. Jon Lord gave his blessing for Don Airey to be his replacement.

Jon Lord continued to make music and made the classical albums ‘Pictured Within’, ‘Beyond The Notes’ and more recently ‘To Notice Such Things’ which was released in 2010. Lord has continued to do occasional concerts, mainly in Germany and East Europe in places such as Bulgaria and Hungary despite having to receive treatment for pancreatic cancer.

Lord held a positive attitude in fighting the disease and more recently had been touring a re-working of ‘Sarabande’.

Jon Lord has moved from darkness to light. He leaves behind his wife Vickie Lord and his daughters Amy and Sara.