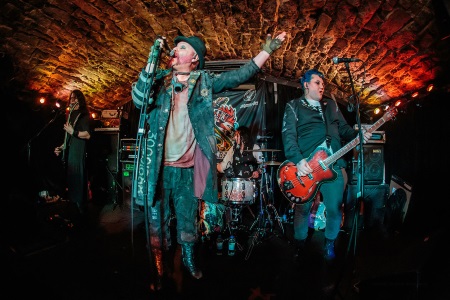 Bristol party punk rockers IDestroy have probably never had an intro to a gig like they got tonight.

Andrew O’Neill from headliners The Men Who Will Not Be Blamed For Nothing returned to his day job for a short time and did an impromptu stand up comedy set to start the evening.

At the end of that he split the crowd into two and got them to perform part of ‘Bohemian Rhapsody’ as a welcome while the trio walked up the middle and took to the stage.

How do you follow that? That seemed to be easy for these three spirited young musicians. They are full of attitude and talent and no little confidence so they launched straight into the song that gave them their name.

The catchy yet insistent energy of their take on post-punk soon had the audience forgetting about Queen, and going with this rawer groove. 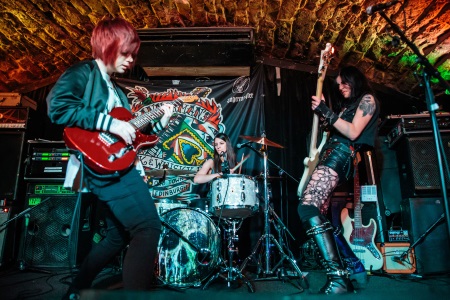 While there is plenty of punky energy emanating from the stage this certainly isn’t a band that fits into any particular pigeonhole. Bec Jevons is a dab hand at throwing out those jagged guitar riffs and drummer Jenn Haneef has her own pointedly focused style as she drives the songs onwards.

What really adds something different to the sound is the busy bass guitar of Becky Baldwin. Often to be seen playing in a maelstrom of noise in Metal bands, here the sparser soundscape of a three piece lets the full effect of her talents on her old school Rickenbacker come to the fore. 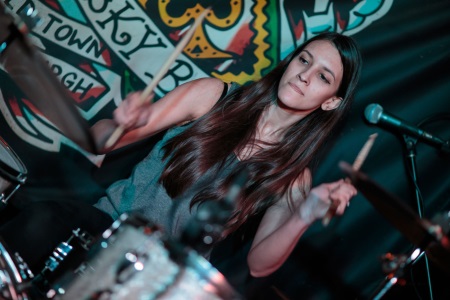 The quality of the musicianship and a few sub pop-punk type backing vocals on catchy choruses on songs like ‘Lemons’ and ‘98%’ mean that they can cover punk from pretty much all sides.

They even include some crowd participation elements so fully live up to their party punk epithet. The title track from their latest EP ‘Pure Joy Of Life’ confirms that they are an ever improving force on the songwriting front too. 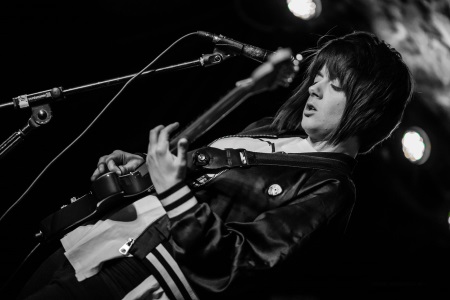 Punk has never been delivered in quite the way IDestroy do it, it’s great to hear old influences and inspirations being taken to fresh new places. I thoroughly enjoyed this party with their punk.

The blurring of the lines around punk as a genre continued with headliners The Men That Will Not Be Blamed For Nothing. Elements of old school punk. steampunk and according to the band something called anachro-punk are mixed up into a potent and sometimes confusing mix.

There are left-leaning socially conscious lyrics mixed with anarchic humour. There’s some Heavy Metal riffing and synchronised headbanging controlled from the stage.

At one point things slow down enough for frontman Andy Heintz to produce a saw and to somehow play the thing as a musical instrument.

There is daftness aplenty then and the packed crowd thoroughly enjoyed joining in with all the craziness and laughing at the ribald and often unscripted humour. 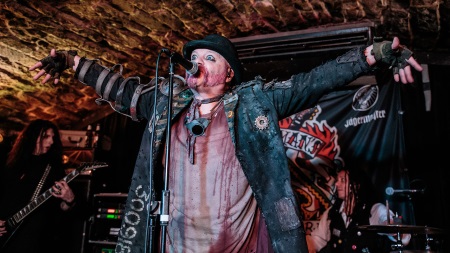 Underneath it all though, these guys in their scruffy hats and dresses and all the rest actually have some some memorable tunes to hang everything on, plenty of substance as well as style and fun.

‘Charlie’ is part sea shanty, part clever and funny lyric about the life of Charles Darwin. ‘Brunel’ is another Victorian icon given a London punk tune as if The Lurkers had been hired by the History Channel. 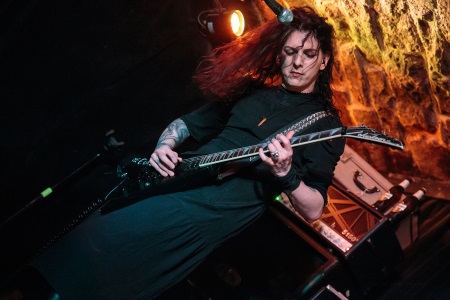 ‘Doing It For The Whigs’ is a thinly veiled, as in not veiled at all attack on Tory politics with the energy of Sham 69 but with much more humour. They even ended the main set with a more serious musical set piece in ‘There’s Going To Be A Revolution’, the hypnotic heavy riffing tune continuing as each instrument in turn ceased to play as the band members left the stage one by one.

Normal service was resumed in an extended encore with ‘Etiquette’ getting the room dancing madly along with the fun, frantic atmosphere.

This was a thoroughly enjoyable evening which absolutely proved that punk’s not dead. It is however going into some strange and interesting places in the twenty first century and is all the better for it.

Previous articleSATAN’S EMPIRE LAUNCH ‘HAIL THE EMPIRE’ TO THE MASSES
Next articleIT’S THE COVERS EDITION ON METALTALK RADIO, CO-PRESENTED BY WHITNEY