The Symphonic Metal band from Mannheim, Beyond the Black, have certainly endured some tribulations. A rapid rise in the public eye of German Metal saw them quickly chart and a couple of years packed with several tours, appearances, two albums and a spot at the legendary Wacken Open Air followed, before it came abruptly when they suddenly announced the split.

With singer Jennifer Haben left as the sole original member, Beyond the Black have now reassessed and morphed into a new formation who are now ready to take over the world.

Beyond The Black – Horizons (Napalm Records)

The undeniable skill of the singer, who stands very much at the forefront, is thanks to the impassioned delivery, versatility and clarity of the vocals that skilfully range from sweet tones to full on powerhouse explosions. Haben can only be described as the Alanis Morissette of German Symphonic Metal.

With this record, Beyond the Black have wanted to distance themselves from the classic Symphonic Metal label and Horizons is a testament of the band’s evolution into a broader, more encompassing cross pollination. Learning from the masters of the past, they have incorporated a harmonic melange of Rock, Metal, Electronica and even Pop. 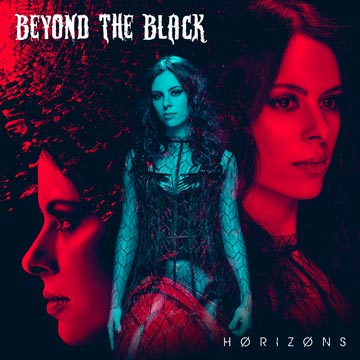 The title track ‘Horizons’ is the perfect introductory track where, ironically, Jennifer sings “come with me” as a metaphorical invitation to take her hand. Grandiose in the production, including strings, epic choruses, a screaming solo and beautifully rounded with Haben’s powerhouse vocal, the song certainly sets the mood for the uplifting mesmeric journey we are about to embark upon.

‘Misery’ was the first single to be released and it greets us with a four on the floor type poppy feel, which will have heads bobbing all the way through, while the dreamy vocals, with an edge break, into a glorious chorus.

However, the spellbinding ‘Wounded Healer’ (see below), featuring Elize Rhyde of Amaranthe, remains one of the strongest numbers. The third single released and complete with a futuristic type lyric video, it is where both voices beautifully marry as stylistically very similar. The 115K YouTube hits the video has already reached to date, only confirm that this song will be huge.

‘Golden Pariahs’ is the other anthem and, unsurprisingly, the second released single. Probably the most prominent in the set, it is fierce, energetic and right in your face. More Metalcore sounding, including distorted guitars and a thumping rhythm with plenty of backing from the drums and glorious choruses, it is indeed uplifting and what would be described as the classic “warrior song’”

Beyond the Black have also released a wacky lockdown version of this track dedicated to the fans, where they have merged homemade fan footage with their own.

Worthy of note are also ‘Some Kind of Monster’, a singable number with an extremely catchy refrain, where you envision the crowds chanting with Haben giving ‘high fives’ across the room, and the spellbinding ‘Coming Home’ evoking 70’s classic Rock and 80’s electronica, climaxing into grandiose choruses.

The recurring themes are fight, survival, standing tall against all odds, however the sombre ‘Human’ reaches new depths with Jen exploreing the meaning of life.

When you have a singer with such pure tone, stripped down renditions never go amiss and ‘I Won’t Surrender’ is no exception. A beautifully haunting piano and string ballad where Haben showcases her full range, nevertheless not losing momentum on the chorus. This pretty much seems to be the winning formula.

Though it could not exactly be classed as ground-breaking, where some of the songs act merely as harmonious fillers, ‘Horizons’ is a well grounded compilation exuding class and style. Dark, melodic, nonetheless driven Rock with poptatstic flavours and indeed fresh and tastefully executed.

Will it live up to the grandeur of past glory reached with the likes of ‘Forget My Name’? absolutely!

Beyond the Black 2.0 are only just getting started.

Horizons is out this Friday, 19 June, on Napalm Records and available from most outlets.

BEYOND THE BLACK live:
w/ AMARANTHE