HAWKWIND LAUNCH ‘INTO THE WOODS’ WITH STUNNING ACOUSTIC BORDERLINE MATINEE

The private showcase was to launch Hawkwind’s new album, ‘Into The Woods’, which is released today via Cherry Red Records and as the quality of the veteran psychedelic rockers’ thirtieth opus was revealed, it became apparent that this could well be their biggest album to date.

It’s almost half a century since Hawkwind formed and a sprightly and jovial Dave Brock rolled back the years and delighted those in attendance with two choice cuts from the past, a track from ‘Into The Woods’ and a throwback to his Ladbroke Grove busking days.

Talking of cuts, Dave was unable to strap on his guitar due to a recent hand injury which we are reliably informed will have fully healed in time for Hawkwind’s forthcoming UK tour which includes a gig on Friday 26th May at The Roundhouse. Phil Campbell And The Bastard Sons are the support band that night and as this is the venue where Motörhead played their first ever gig, supporting Dave Greenslade in July 1975, a poignant evening is in store.

Two tracks from ‘Into The Woods’ were aired via the venue’s PA but as this was an afternoon showcase, there were volume restrictions to be observed but this in no way deflected the quality of the new material.

The album’s title track has a very distinct rock’n’roll vibe while ‘Space Ship Blues’ is an upbeat number with a dancy vibe. Both numbers were sonically delightful and despite the low volume, hearing them for the first time through a proper venue PA was a real pleasure.

Delighted cheers greeted the band as they entered the stage and these turned to gasps of amazement as Hawkwind bestowed a wondrous acoustic versison of ‘The Only Ones’, from 1978s ’25 Years On’ album which was released under the name Hawklords for legal reasons, as there was a dispute over ownership of the name Hawkwind at the time.

This is not the only time a pretender has attempted to nik Dave Brock’s legacy but as it will continue to do so, truth and fairness prevailed in this case.

Fourth and final track of the afternoon, ‘Psi Power’, was also from ’25 Years On’ while second number ‘Mind Cut’ appeared on double album ‘Onward’, Hawkwind’s twenty-fifth studio album (twenty-seventh overall). ‘Ascent’ was the only song performed from ‘Into The Woods’ but you can expect more from the latest album when the band hit the road in six days and at Hellfest in France which begins on June 16th.

This was a great performance of four great songs but the most remarkable thing of all was that no amplification whatsoever was used. Hawkwind lead singer Dibs told us after the performance:

“Sometimes electricity gets in the way.”

On this showing, it seems that little can possibly get in the way of Hawkwind’s renaissance and continued progress. Don’t be surprised to see them performing a full acoustic set at The Palladium or Royal Albert Hall in years to come.

In the meantime, tour dates beckon and you can be sure that a very large dose of the right stuff will most definitely be served up every night. 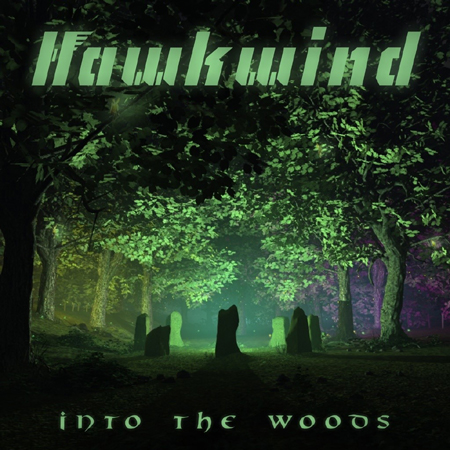 ‘Into The Woods’ tracklist:
Into The Woods
Cottage In The Woods
The Woodpecker
Have You Seen Them
Ascent
Space Ship Blues
The Wind
Vegan Lunch
Magic Scenes
Darkland
Wood Nymph
Deep Cavern
Magic Mushroom

‘Into The Woods’ Tour 2017, support on all dates is Hawkwind Unplugged except London where Phil Campbell And The Bastard Sons are supporting and Mello Festival where there will be no unplugged set.

HAWKWIND LAUNCH ‘INTO THE WOODS’ WITH STUNNING ACOUSTIC BORDERLINE MATINEE