Hammerfall ‘Live! Against The World’, released as a double CD live album, was recorded on 15 February 2020 at the MHP Arena in Ludwigsburg, Germany, during their World Dominion Tour.

Okay, confession time. This review is actually the first time I have heard anything from this Swedish Power Metal band and that is the double edge of reviewing stuff. It is good because you hear new music, new bands and bad at times because you ask yourself, why did I not get into this sooner?

With this release, what you have got here is twenty songs of immense Metal, all played in front of a capacity crowd of seven thousand at Ludwigsburg, Germany. And it is fair to say that this type of Metal probably has more traction on the continent than the UK. But why? 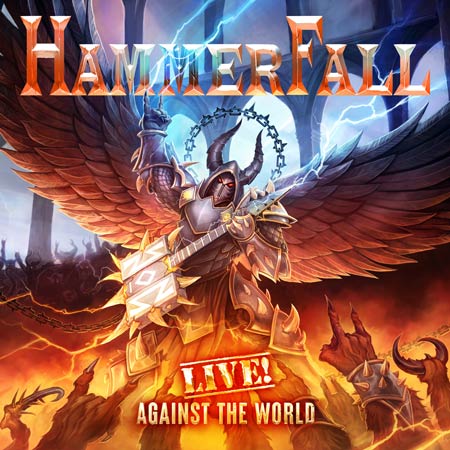 You only need to get two or three songs in before you know what Hammerfall are all about. The individual against the world, or, conversely, a small band of brothers (or sisters), fighting the good fight, not stopping until Metal dominates the world, like a hammer falling from the heavens.

And Hammerfall themselves would probably agree. But you know what, on their night, in front of their audience, it absolutely works.

And yes, if there is one thing that runs through their music like letters from a great big stick of Rock, it’s clichés. But let’s face it, most, if not all Metal bands have embraced them from time to time. And Hammerfall have simply pushed the Saxon/Iron Maiden envelope to the nth degree, creating a single-minded, singular monster vehicle for their form of Heavy Metal expression, and who are we to question them, or their longevity, or their fans?

Because, undeniably, musically, each part is good: the drumming, the rhythm, the guitar and singing. This band has got talent by the truckload and they are clearly passionate about their music. If you go to see them live, you know what you are going to get. On that and with this live album, they deliver.

Hammerfall have been around for a long time. They formed in 1993, but as Joacim Cans told the crowd many times, they’ve been “doing this” for twenty-three years and if they are now headliners at a major venue, it is for a reason. And there are many cork-sniffers out there who would bend over backwards to mock Hammerfall, but this band has clearly got their audience and they clearly deliver for them.

I would rather people went nuts over Hammerfall, than the latest X Factor winners, so if it is not too topical a thing to say, maybe there are lessons to be learned from Europe, just saying.

The concert and the album itself, starts with ‘Never Forgive, Never Forget’. The bell ringing is not 100% original, but it sets the tone. Then, in comes the keyboard intro which is atmospheric, orchestral and symphonic. As the cheers start, Joacim Cans greets the crowd and the madness begins.

Joacim proudly states, this is what they do. And what they do is full throttle Metal: riffs, riffs, riffs and drums all over you, along with clear vocals, like a higher pitched, but more down to earth Bruce Dickinson.

You get the sense that nothing much has changed since NWOBHM, but just more intense, with super-fast shredding and solos. I might be showing my age, but it is also really refreshing to hear crystal clear vocals. In a lot of ways, it is like I am back in 1985, and that is one thing I would never complain about.

The anthems come thick and fast on this album and sure some of it is a bit bombastic, but the press release boasts that is exactly what the band are, and lets face it, Maiden have been doing that for years.

Sure, some of this offering is a bit wooden, a bit formulaic, but fans of this genre will lap it up. It is a definite escape from the worries of the world and if that is what you like, you will like this. And even though at times I thought to myself “there is nothing new here”, solos and riffs of sheer brilliance came along and told me to hold my tongue.

Because even here, even with Hammerfall, they can still surprise you.

Joacim announces ‘Hallowed Be My Name’ as one of his favourite songs that has not been played for a long time. My question to the band is why? This song has got a nice opening riff, a very nice opening riff and some variety with the guitar lines, although the lyrics stayed more or less the same. My advice to the band: “always play this song live.”

Some acts have very little between song chatter, like Alice Cooper and some have arguably too much, like Nickelback. Hammerfall sit roughly in the middle and despite their blood and thunder image, it is all very nice. How many other bands refer to the crowd as “my friends?”

And it is the slower offerings which bring the surprises, like ‘Redemption’, packed full of theological/spiritual lyrics and a very thoughtful solo, which for me was the best so far.

Even with editing, you can tell the crowd are loving it. The band clearly have belief and after all these years, their formula works.

What the hell, it works for ZZ Top, albeit a very different formula. I guess Manowar are looking over their shoulders at Hammerfall, who mention warriors more than Dio mentioned Rainbows.

‘Second To One’ is a duet with Battle Beast’s singer, Noora Louhimo. This song starts with piano. Err, what? A ballad? Well, okay, if we are going to be clichéd, might as well go the whole hog. Token ballads from bands that should never do them are an island of sameness within a whole world of sameness. I have never been much of a ballad man, so apologies for marking that one harshly.

For those with a keen eye on metal history, ‘Dominion’, which also has a great riff intro, similar to ‘Hallowed Be My Name’, played like a Swedish Metal take on Ozzy’s ‘Rock ‘N’ Roll Rebel’. More deep voiced chorusing and the question was asked, “serve in Heaven or reign in Hell”. I wonder which way this audience went.

And of course, you could probably count on one hand i concert that does not get the audience involved, or singing, or doing something alongside the band.

And so it is here. Joacim chants “If I say hammer, you say fall. Let the Hammer….fallllllll!!!”. Which takes us into ‘Let the Hammer Fall’, which is the song where the crowd join in the singing and that happens everywhere. If you are not there, it is the ultimate same old story, when you are there, it is an essential component.

‘Hearts On Fire’ brought the show and the album to a high speed end.

After twenty plus years, Hammerfall have got everything, especially energy and belief.

They have perfected their art and within their niche they are the masters.

And let’s face it, you do not really go to a Hammerfall gig to hear the Blues, or Prog, or AOR, or any of that other stuff.

Long may the Metal carnage continue!