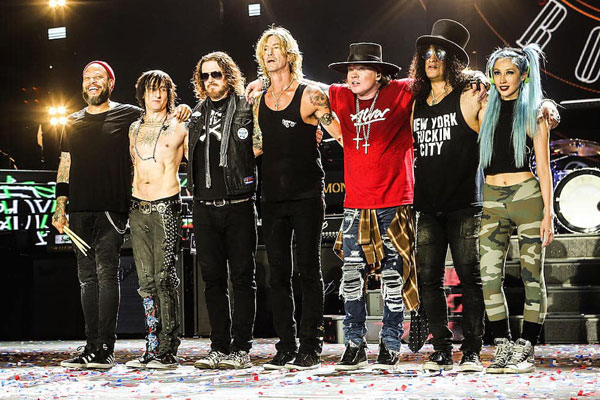 As Guns N’ Roses prepare to embark on another US leg of their record breaking ‘Not In This Lifetime’ tour the entire music world waits with bated breath for possible new music from the reunited line-up of Slash, Duff and Axl Rose.

Several as yet unreleased and unfinished studio tracks have recently been heard and while MetalTalk strongly condemn any leaking of artists work before release we felt compelled to share our take on these songs to give expectant fans at least some idea of what has gone before and what may be coming in the world of Guns N’ Roses.

All of these tracks seem to have been recorded during the ‘Chinese Democracy’ sessions between 1998 and 2001. First of all is the only track that has been heard in public before. Performed just twice in early 2001 at their Las Vegas and then Rock In Rio comeback shows, ‘Silkworms’ is a rather bizarre song and a definite departure for Guns N’ Roses.

This studio version of the song begins with a synth heavy soundscape then slowly opens up to a heavy drum beat and distorted vocals. Sounding a lot closer to The Prodigy that any hard rock band, this early version has no guitar solo either, instead having an ominous synthesizer break before the drums pick up again and the song ends abruptly on a blast of feedback.

Arguably the first great track of the bunch is titled ‘Hard School’. Having been previously mentioned by frontman Axl Rose, seemingly in jest, as being titled ‘Jackie Chan’, the song itself is a four minute hard rocker that builds from an intro of twisting guitars and rolling drums into a fast paced rocker with an absolutely ferocious chorus.

“But you had to play cool, had to do it your way, had to be a fool, had to throw it all away,” spits frontman Axl Rose in the chorus. Sonically very similar to ‘Chinese Democracy’ the song is a brilliant, high energy blast of venom and angst.

‘State Of Grace’ takes a different turn entirely. Having described their sonic template as “‘Physical Graffiti’ remixed by Beck and Trent Rezner,” back in a 2000 interview, it’s hard to think of a better way to label this one. The song starts with a heavy industrial beat and distorted bass before then guitarist Robin Fink strikes up an almost funky riff. The verses and chorus boast a sound that is reminiscent of early Nine Inch Nails and Marilyn Manson.

“Oh my love, can it be, I’m falling from your grace with me,” sings Rose before soaring into the chorus with his never to be imitated high range vocals. Although clearly an unfinished demo recording the song is still a winner and hugely promising.

‘Perhaps’ begins with a chugging piano line that underpins the whole song before Rose enters in with a distorted guitar behind him. Sounding similar to ‘Street Of Dreams’ the song sways between softly sung verses and a heavy chorus with the refrain “You’re all alone now” being sung repeatedly. It also seems to feature a guest guitar solo from Queen’s legendary guitarist Brian May who was known to have recorded parts for several songs in the ‘Chinese Democracy’ sessions.

Previous article
FROM THE ABYSS: VERDELET FORGE FORWARD, AGAINST ALL ODDS
Next article
IRON MAIDEN RELEASE THE FIRE AND THE FORCE IN LOS ANGELES