No ‘top 10 German Metal band’ list would be complete without Grave Digger. These stalwarts of metal are in their 40th year, and not holding back one bit!

Fields of blood is their 20th album, which in itself is an incredible feat and it is also the final piece to their Scottish themed trilogy spanning decades.

In 1996 the band first ventured to create an album themed around Scottish Independence with ‘Tunes of War’ followed by the more mystic ‘The Clans Will Rise Again’ in 2010. Ten years later and the trilogy is complete with a plethora of battle songs.

This album brings together an excellent collection of history, passion, fighting and unadulterated pure Metal. Fields of Blood is a true Heavy Metal concept album, an increasingly rare feature in the modern music world.

If you enjoy full albums, this will be a pleasure to listen to in its entirety with no filler or random order of songs and a rich thematic story throughout.

After a melodic intro, it thunders straight into ‘All for the Kingdom’, leaving us in no doubt the theme of this album with soaring “all for one” choruses in between the meaty verse riffs. This will make you want to find an axe and go join a medieval battle!

The next song, ‘Lions of the Sea’, continues in a similar vein and has arguably the most memorable chorus of the whole album.

‘Freedom’ follows and it has some great guitar licks, with Axel Ritt’s fingers finding the freedom to make the instrument truly sing. 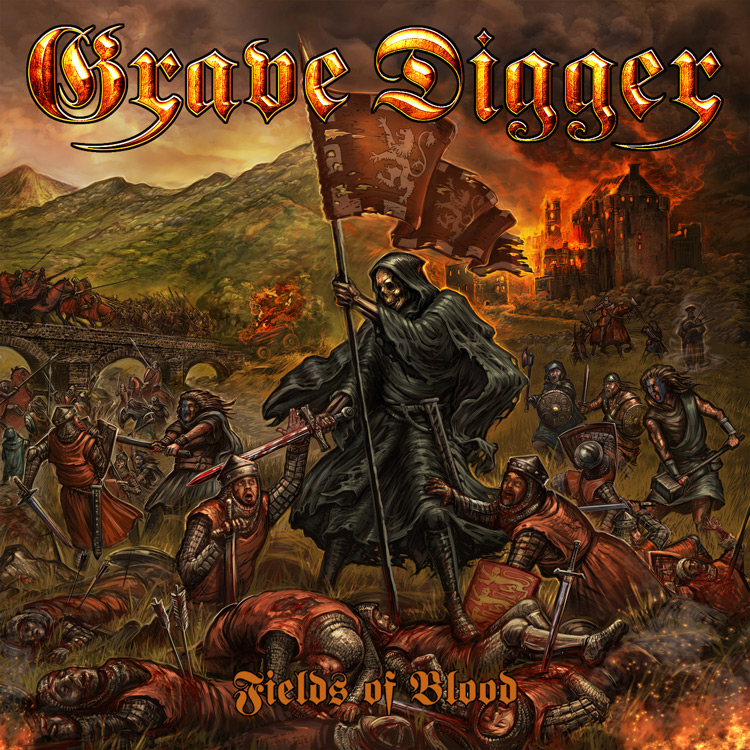 The album continues to pull every Metal trick in the book, recorded to excellent modern quality but keeping faithful to a traditional Metal style. If you are a fan of traditional Heavy Metal, with thematic lyrics interwoven into a complete package of an album and the odd bit of bagpipes, then you will not be disappointed.

Does this album re-write the books? Not particularly, but it involves the qualities which a complete Metal album should have: tasty melodic guitar parts as well as shredding riffs, rumbling bass, bellowing drums, and that distinct voice of German Heavy Metal which can only ever be Chris Boltendahl.

The songs are an excellent mixture of headbanging riffs, power metal moments of grandeur and, to top it off, a wonderful Metal ballad with ‘Noora Louhimo’ (from the band Battle Beast).

So might anything put you off buying it? Well, depending how ‘English’ you feel, then the constant Scottish theme may be a slight turn-off, as might that feature of a distinct vocal accent of (older) Metal bands from the continent singing in English.

However, these are minor aspects and you will easily have this album on repeat for days.

The completeness of the package is what perhaps make it stand out more than any individual song, which few modern albums achieve well. Grave Digger are in their 40th year, and they certainly know how to write an album and get the best out of production, this album is as Metal as it gets.