If you are a keen fan of modern rock or progressive music in general, you will know that Mike Portnoy has more band projects than many bands have albums. However, the fact that they each manage to maintain their own character and charm never ceases to amaze.

“Hello London” declares a jubilant Portnoy behind his sizeable drum kit. “Welcome to the rarest of all sightings, rarer than a UFO sighting, rarer than a sasquatch sighting. A Flying Colors sighting, here on stage in London”.

Opening with the tasteful and understated track ‘Blue Ocean’, the entire band is restrained until the final solo when the damn finally bursts with a crash of drums.

One of the most impressive things about Flying Colors is that there is absolutely no resting on previous glories here.

There is no nostalgia, no encore of ‘Highway Star’ or a ‘Pull Me Under’ here, just organic, well written new music.

The sublime harmonies of lead singer Casey McPherson and multi-instrumentalist extraordinaire Neal Morse, add an extra dimension to proceedings. Tracks like the deliciously funky and progressive ‘The Loss Inside’ or the chunky riffing of ‘More’ are taken from their impressive ‘Third Stage’ album and they make it amply clear this band has real musical chemistry.

Casey McPherson may just be the secret ingredient in this mix, with his strong voice bringing a very emotive and genuine energy to songs like the superb single ‘Kayla’.

Talking about walking out on the stage, McPherson said: “I remember how I felt right before the show in London. I was excited because my oldest daughter and her grandmother was there, whom I love dearly, and felt like I had the show, down by then.

“It’s always a good feeling to take the stage when the material is ingrained enough to just let go and let it out!”

Placed alongside the sheer brilliance of Steve Morse on guitar, it is almost impossible to go wrong. Morse is surely one of the most underrated guitarists of his generation, weaving an ever tasteful and restrained line of guitar throughout the entire set here, occasionally giving glimpses of his ability to shred with the best of them.

The brilliant ‘Geronimo’ sounds like the 80’s YES lineup got stuck in a time machine with Bootsy Collins and the result is one of Flying Colors finest songs.

Frontman Casey introduces the powerful acoustic ballad ‘You Are Not Alone’ by recounting his journey by boat to help those affected by the 2017 floods in Texas.

It is followed by the upbeat power-prog of ‘Forever In A Daze’, which lets the band stretch out with bass and guitar solos. “Flying Colors play a lot of different styles of music and now we’re going to to the pop thing!” announces Neal Morse, introducing the playful ‘Love Letter’. With clever hooks reminiscent of early ELO and The Beach Boys , it is an extremely clever and enjoyable tune from a band that is not afraid to mix and brew different styles.

The more grandiose songs like ‘Peaceful Harbour’ do occasionally drift into overly earnest, lighters in the air territory, but Flying Colors can surely be forgiven the occasional solemn moment.

New song ‘Crawl’ is an impressively structured epic, which goes from wistful vocals and keyboards to soaring guitar solos and back again.

‘Infinite Fire’ is another highlight. Sounding a bit like a cross between Dream Theater and early 80’s era Rush, it is a splendid journey into the Prog universe, that once again sees Steve Morse leading the way with a sublime guitar solo.

Ending on a high with the swirling riffs and big choruses of ‘Mask Machine’, the band take their well deserved bow.

‘Third Stage Live In London’ is available in a pretty wide variety of formats from Blu-Ray to 3LPs of coloured vinyl, so however you enjoy your Prog served you should be happy with this selection.

A fine live collection by a band that clearly has much to give and there is a wealth of material here just waiting for you to dive in. 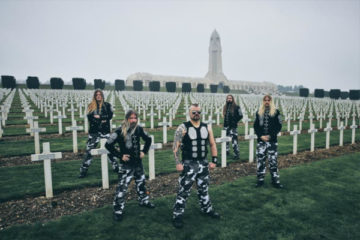