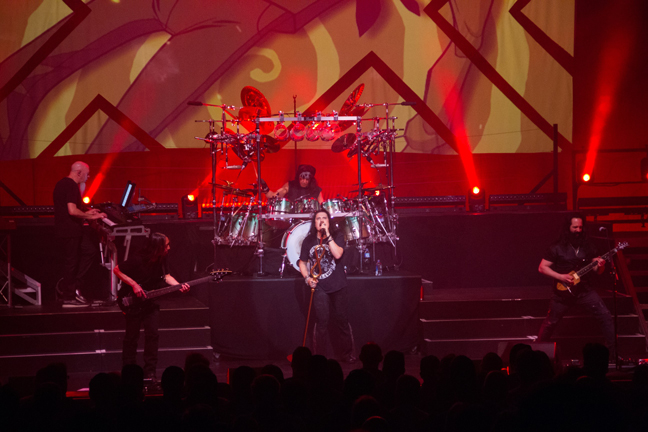 Tonight the line of fans snakes its way around the fabled Hammersmith Apollo as Dream Theater begin their first night of a two day run of shows on their ‘Distance Over Time’ tour.

As the lights go down inside, Dream Theater kick off their set with the thunderous groove of ‘Untethered Angel’ before guitarist John Petrucci and keyboardist Jordan trade mind boggling solos. Tonight the sound is coming loud and clear and even with so much going on it’s never difficult to hear what’s going on in the mix.

“Hello London” says a visibly pleased frontman James LaBrie, before stressing the importance of the power of music to bring people together. “We’re filming tonight and we’ve been on the road for seven weeks so if I get silly up here , you know why”.

The band themselves look and sound like a well oiled machine. 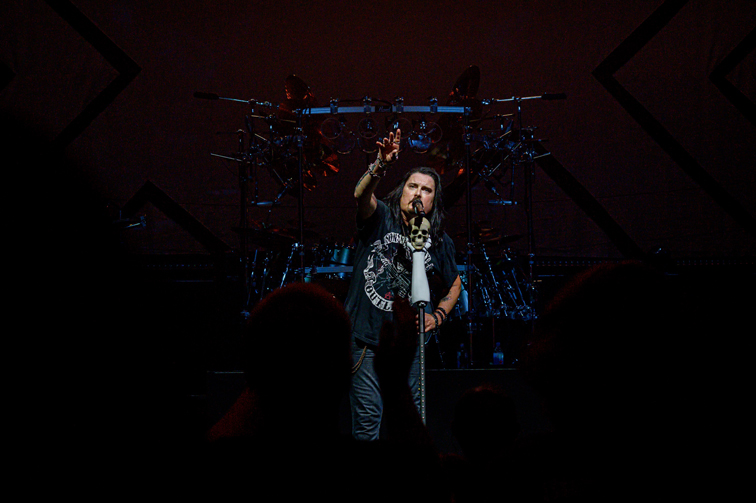 John Petrucci still walks a musical level that few other guitar plays could ever dream to attain. From the heaviest riffs to the soaring solos of new song ‘Barstool Warrior’, he is flawless. The label of virtuoso barely covers bassist John Myung and keyboardist Jordan Rudess while Mike Mangini’s drumming defies belief as he effortlessly rolls between what looks like two levels of pads and cymbals.

With the exception of two songs, the entire first set draws from the band’s most recent album ‘Distance Over Time’. It is a testament to the songs quality that they sit so well next to older fan favourites live. The chugging and swirling riffs of ‘Paralyzed’ make it an early highlight of the night. Another new song, the Carl Sagan inspired ‘Pale Blue Dot’, begins with waves of synth drifting through space before the band kick into one of their heaviest and most intricate songs to date. So ends act 1 of the concert and the timers begin to count down.

After a brief intermission the lights dim and the titles begin to role for what many believe is the main show. 20 years on from it’s release, ‘Metropolis Pt.2: Scenes From A Memory’ is widely viewed as Dream Theater’s ultimate artistic statement, besides being considered one of the greatest progressive metal albums ever made. Being played from start to finish tonight, the epic and often heart-rending tale of murder, lost love and reincarnation has lost absolutely none of it’s magic. 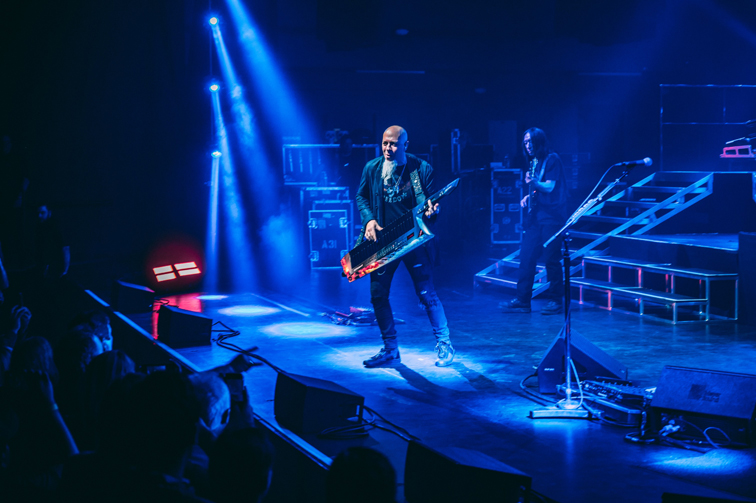 From the mesmerizing ‘Strange Deja Vu’ to the heavy, frantic groove of ‘Fatal Tragedy’, the album still has the power to send headbangers in the audience wild. At the same time, softer songs like ‘Through Her Eyes’ and the transcendent ‘The Spirit Carries On’ bring tears to many eyes in the crowd, this reporter included. Tonight, Dream Theater deliver a performance that is nothing short of jaw dropping. As the closing dialogue of ‘Finally Free’ drift across the crowd and the lights go up the band are given a standing ovation as they leave the stage.

Dream Theater return for one final song as encore, the tremendous Prog onslaught of ‘At Witt’s End’, which has the whole crowd on it’s feet. As the fans roar their approval tonight’s concert has just reached the three hour mark. A spectacular end to a truly phenomenal gig from the reigning kings of progressive music.