Another year, another Delain touring cycle. The Dutch symphonic Metallers have put a lot of miles in over the past few years, with prestigious support slots with Nightwish in the US as well as headline shows in the UK and Europe. This time around the tour is in support of their recently released sixth album, ‘Moonbathers’ and for their Manchester date they were booked into the 1500 capacity o2 Ritz, a step up from their previous appearances at Club Academy.

Delain/Evergrey/Kobra And The Lotus
Ronnie Soo 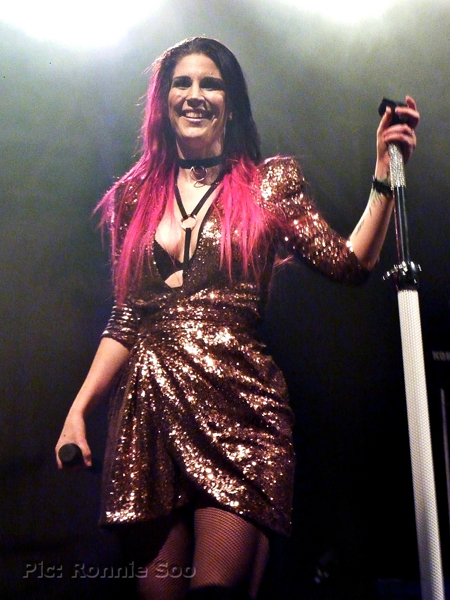 With a club night scheduled to follow this gig, it was quite an early start for the show, a three-band bill; following a meet and greet/acoustic performance by Delain for the small group of fans who took up the VIP package, and got first pick of spot on the all-important barrier, the doors opened and plenty were already in place for openers Kobra And The Lotus. A Canadian quintet fronted by the stunning Kobra Paige, their music is traditional Metal with plenty of fist-pumping and shredding solos courtesy of guitarist Jasio Kulakowski. Paige, a classically trained singer who turned to Metal while still in her teens, demonstrated a strong voice and was pleased at the warm reception from the Manchester crowd. 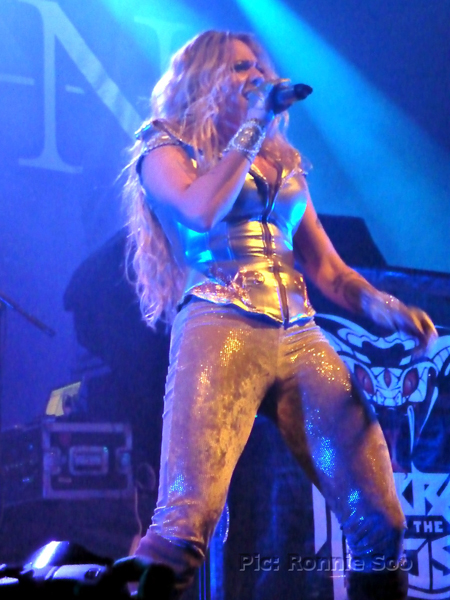 Evergrey were up next, a Swedish outfit based around vocalist/guitarist Tom S Englund. Their style of Metal is also old-school with plenty of harmony guitars from Englund and fellow axeman Henrik Danhage, and has more than a little Maiden influence. The quintet had a better sound mix (a little less bass-heavy) than the openers and went down well with the crowd, some of whom were clearly there for Evergrey as the band’s name was chanted from pockets of the crowd on the floor.

The frontman got a cheer when he mentioned that they’d play ‘In Orbit’ which on record features Nightwish singer Floor Jansen, only for him to dampen it down by adding that he’d have to perform her part as she wasn’t there (!) He then got a boo when he announced to this crowd that he was a Manchester United fan; presumably he thought that’d go over better than it actually did! Not everybody there was from Manchester and those who were could well have been City fans. Football banter aside, they gave a very good set and are worth seeing if they play in your area. 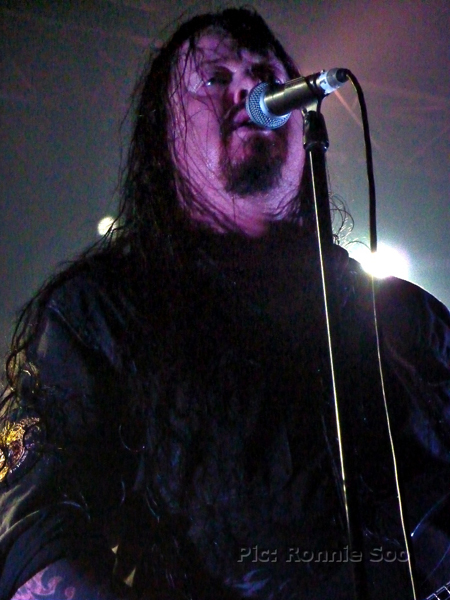 Delain came on at 8:30 sharp with drummer Ruben Israel appearing first to the intro music, ‘Monarch’ from the recent ‘Moonbathers’ album, who then started to play along to the intro, joined by guitarist Timo Somers and then the rest of the band. They opened with album lead-off ‘Hands Of Gold’ and were straight into that synchronised headbang routine that has become a familiar sight. Lead singer Charlotte Wessels then made her grand entrance, clad in a glittery 1980s-style outfit complete with shoulder pads, to tremendous cheers.

From the off she had the crowd in the palm of her hand, easily getting arms raised, fists pumped and “hey, hey!” chants going. Bassist Otto Schimmelpenninck van der Oije once again handled the ‘growly’ vocal parts on this track and others that called for it, when not doing those he was all over the stage, frequently swapping places with Somers and fellow guitarist Merel Bechtold. 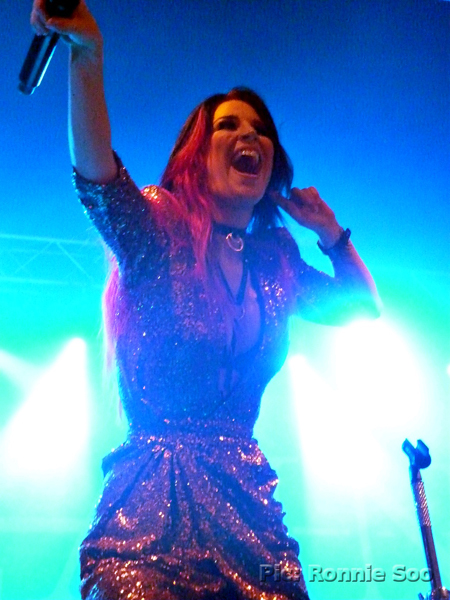 The set was heavily weighted towards the current album, always a sign that a band really believes in their latest release, with no fewer than seven tracks from it performed. ‘Suckerpunch’ got the crowd chanting along with its “whoa, whoa” hook, and the singer got the crowd clapping along for the first of many times to ‘The Glory And The Scum’. Their older albums were not ignored however; the crowd were encouraged to “keep those hands in the air” for ‘Get The Devil Out of Me’ and ‘Army Of Dolls’. They’re also celebrating the tenth anniversary of debut album ‘Lucidity’ this year and that record was acknowledged with ‘Sleepwalkers Dream’, ‘Pristine’ and ‘The Gathering’.

‘The Hurricane’ from the current album was as much a highlight of the live set as it was on record, showcasing both Wessels’ sweeter lower range as well as her stronger vocal in the chorus. She delivered it with real passion and power and on that sort of form she’s as capable as a Floor Jansen of tingling the spine. ‘Fire With Fire’ showed how much more they’re now using Timo Somers’ vocal. He possesses a fine voice himself and since the addition of Merel Bechtold, he seems to have been given a little more freedom in both his guitar playing and backing vocal. 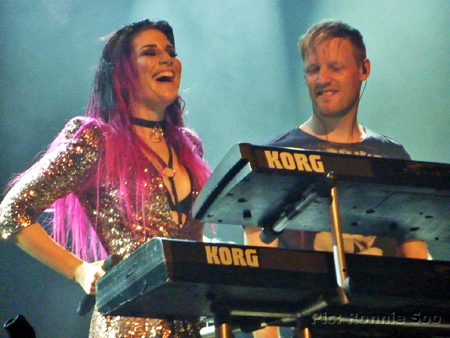 Indeed the whole band contributed not just musically but visually too; the focus is inevitably on the singer when it comes to female-fronted bands of this type but from drummer Ruben Israel right through to keyboardist Martijn Westerholt, all were dynamic. Founding member Westerholt is often overlooked, high up on his perch at the back of the stage and stuck behind keyboards, but look up and you’ll often see him headbanging away – all while playing.

During ‘Don’t Let Go’ which was performed in the encore, everybody was bouncing around the stage and into each other in the case of Wessels and Somers, while the crowd also began to jump. The floor of the Ritz is notoriously bouncy and was effectively a trampoline during this number! After the usual closer of ‘We Are The Others’ the band took their bows. 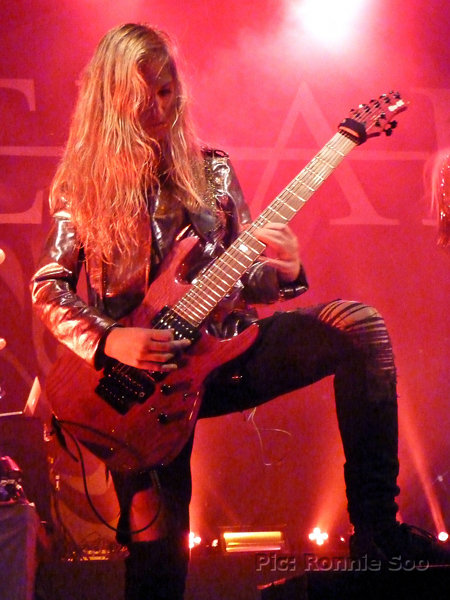 Delain’s popularity is growing each time they come to this country. They drew around twice as many this time as they did a year ago at Club Academy. Before long they’ll be at the same level as a Within Temptation or even Nightwish, just reward for the hard yards they’ve been putting in over the past five years. 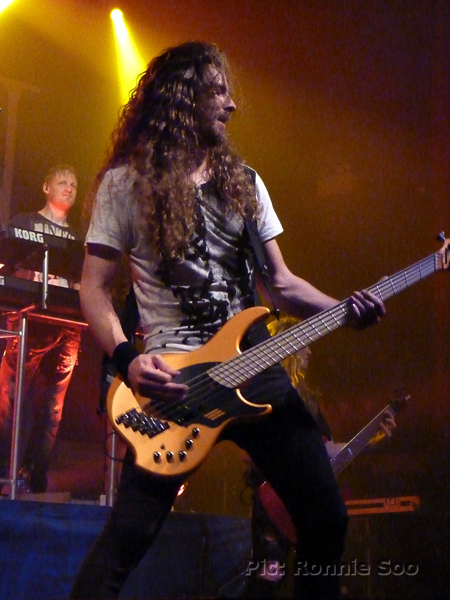 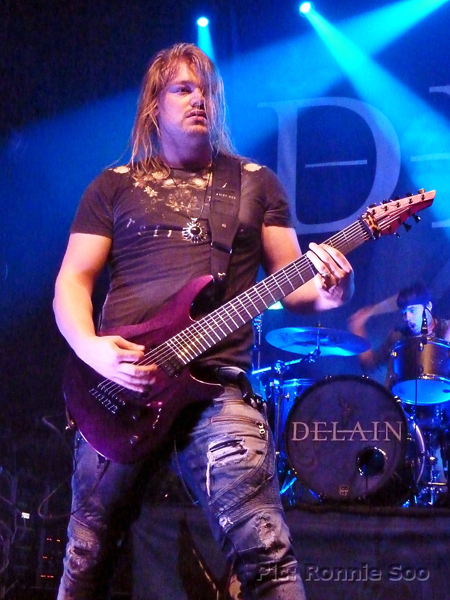 Evergrey Setlist:
Passing Through
The Fire
Leave It Behind Us
Black Undertow
In Orbit
Broken Wings
Guitar Solo
A Touch Of Blessing
King Of Errors

Delain Setlist:
The Monarch (intro)
Hands Of Gold
Suckerpunch
The Glory And The Scum
Get The Devil Out Of Me
Pendulum
Army Of Dolls
The Hurricane
April Rain
Here Come The Vultures
Fire With Fire
Danse Macabre
Sleepwalkers Dream
Stay Forever
The Gathering
Pristine
Mother Machine
Don’t Let Go
We Are The Others
The Monarch (outro)