It was a real rocking reunion for Def Leppard as they and their classic ‘Hysteria’ album shook the O2 to its very core. Filming for an upcoming cinema release, this concert was a highly anticipated show for the fans and the Leps and they certainly didn’t disappoint.

A real testament to the band and their incredible career is the amount of fans who have been there since ‘Hysteria’ was first released and are still here today to celebrate the album and the band that really have created ‘Rock of Ages’.

Sheffield’s finest take to the stage with a full on highly produced show which takes us through the Def Leppard vaults. Elliott’s voice was on point, Phil gave us his full pecs appeal, Viv back from his battle with Lymphoma was simply sublime, Sav gave us his incredible basslines and Rick Allen as always steered the Def Lep ship. The band were, as always, dressed and instrumented up with a serious nod to their Great Britishness. 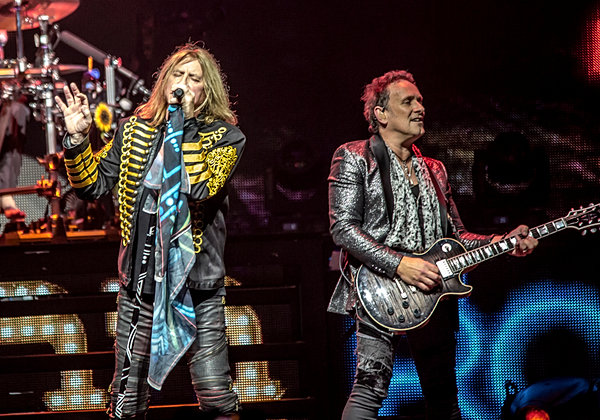 Things begin with a setlist from the album that became a national treasure from August 3rd 1987. It was time for the hysteria to commence. Everyone was out of their seats as soon as ‘Women’ began.

There are times when you go to a gig and everything works in harmony. This was one of those nights. DL were absolutely spot on, twin guitars, harmonies, brilliant backline all working with each other and on the crowd. A real working class band who are still clearly brothers in rock.

On into ‘Rocket’ and the fans were literally going nuts. I looked around the packed arena and everyone was singing along and just loving the show.The atmosphere was as electric as Rick’s drumkit.

‘Animal’ keeps the momentum going and then it’s time for a spot of Savmanship with ‘Love Bites’. Another huge song for the band, the video never did this tune justice. ‘Pour Some Sugar On Me’ follows-– ‘One lump or two’ is still one of the most genius lyrics ever and I don’t even like sugar in my tea! 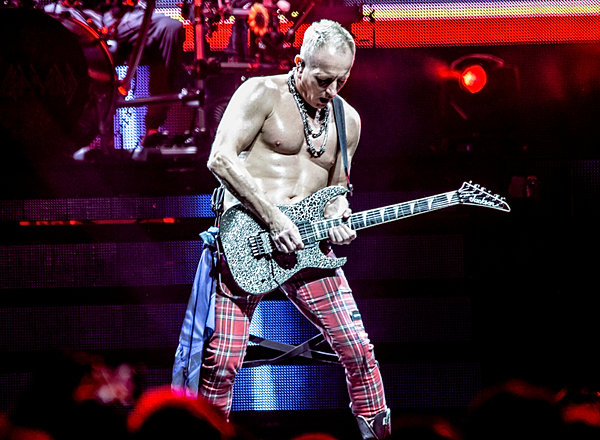 ‘Armaggedon It’ blasts out next and there is more power punching in the crowd-so much so my beer was knocked over. A couple of lesser known songs followed, and

I’d forgotten just how good these tracks were. ‘Gods Of War’ got the nod of approval and ‘Don’t Shoot Shotgun’ was one of those forgotten Lep nuggets that is a great gem of a song. It was closely followed by another in ‘Run Riot’.

Throughout the gig there was a massive screen behind the band showing nostalgic Def Leppard moments, the most moving being their tribute to the late, great Steve Clarke which was truly tear jerking stuff.

Up next was a stunning mash up of Bowie’s ‘Heroes’ with title track ‘Hysteria’, a

moment of genius and a celebration of British rock at its best. Time for another one of those hidden songs that doesn’t get overplayed on radio with ‘Excitable’ which ran straight into ‘Love and Affection’ ending the ‘Hysteria’ section of the show on a high. 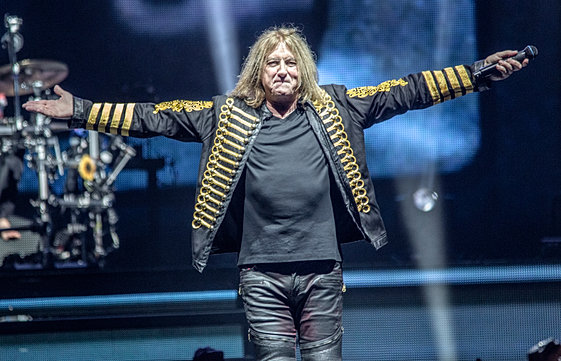 Then it was a trip through the other hits with an epic five song encore. Perhaps each of the band had picked a favourite song?

‘Wasted’ is obviously a huge song for Elliott, ‘When Love And Hate Collide’ is a Savage written song that means a lot to him, ‘Let’s Get Rocked’ gives us Rick’s chops and ‘Rock Of Ages’ definitely shows Phil and Viv’s dual guitar greatness.

Finally it was time for the anthem that the band clearly really enjoy performing,

‘Photograph’ which was played with a montage of photos on the giant screen. A real trip through the Rock ‘N’ Roll CV of a band that deserve their spot as one of the greatest British rock outfits of all time.

This show was an aural and visual triumph and I cannot wait to see it on the big screen soon. Watch this space for news of that. In the meantime, I will certainly never forget Def Leppard and I’m sure they will never forget the hysterical reaction they got tonight. 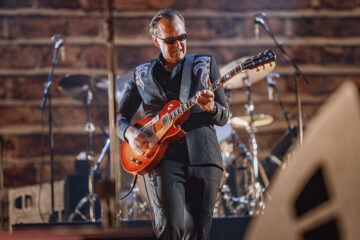