Decapitated drop the album of their career with Cancer Culture

Polish Technical/Groove Death Metal legends Decapitated return with their latest studio full-length Cancer Culture. “The expectations were high,” the band said, “and we also gave ourselves a massive challenge with this album. They certainly were but they have surpassed my expectations with this release. It is a powerful, moving and gripping listen.

There have been a couple of line-up changes since the previous album, Anticult. Firstly the return of Paweł Pasek on bass and the addition of Bloodshot Dawn’s superb drummer James Stewart who brings a very powerful and dynamic edge to the sound. The album also includes a couple of guest vocalists, more about them later.

Cancer Culture is a ten-track, thirty-seven-minute offering, the title of which, running up to this release, seems to have been somewhat misunderstood online. “Don’t misinterpret the title meaning,” Decapitated said. “It has a much broader context.” Indeed it does, as well as reflects what Decapitated have had to deal with over the years.

Once again, they have called upon the services of, Jarek Szubrycht, who was involved with the lyrics on Carnival Is Forever (2011). “He has written amazing lyrics for us about the disproportion between the dreams, ambitions, and aspirations of humanity,” Decapitated said.

Opening with From The Nothingness With Love, a militaristic drum rhythm and haunting repeat riff instrumental intro which builds then bursts straight into the title track, Cancer Culture. Here, to my mind, is a bit of a take on the cancel culture mindset that seems to have spread like a plague, in some respects, reflecting wrongful accusations and online abuse Decapitated have suffered in recent times, as this quote from the lyrics show:

“Smug righteous citizen Chained to his desk, Made of the tree of the knowledge, Playing god and gaining weight….. Eye for an eye, Opinions like opiates, Tooth for a tooth, Comments like convictions….. Roaring lion hidden behind, His wireless mouse, Supreme court ruling the state, From their parent’s house.

For me, this says it all. It’s an intense and brutally tight track but with reflectively melodic dropbacks creeping in, particularly in the second half where it develops into a superb extended swathe of hugely impressive melodic and atmospheric leadwork, a superbly constructed utterly engaging track.

The next piece, Just a Cigarette, “is a powerful, epic, Melodic Death Metal song about human life expectations and death. It was the first song I wrote for the Cancer Culture, which shaped the whole album” explains guitarist and founder Vogg.

It’s a dark unnerving track, again with superb second half leadwork just to break up and soften that brutal edge a little, I love the irony in the lyrics; “So you believed they cut off your wings, These marks on your back are whip scars, What you thought was a morning star, Was just a cigarette lit in the dark, You already know, That you are not in control, You’re being controlled”

No Cure continues to drive through in the same brutal but groovy manner as its predecessors, again with the superb leadwork burst and James’ drum work which is always superb, particularly caught my ear on this track.

The next couple of tracks features those previously mentioned guest vocalists, firstly Hello Death, featuring Tatiana Shmayluk of Jinjer who adds a different slant to the sound on a track inspired by Joseph Conrad’s novel Heart of Darkness.

Second, the up-tempo punchy driver Iconoclast features Rob Flynn of Machine Head on guest vocals, adding a cleaner element, a track which also features some superb technical riff patterns that add a lot of texture to a fascinating track.

Initially slower to start, Suicidal Space Programme has a superbly haunting repeating melody forming an extended opener but ramping up into an intense driver that is not without its complexities, in the shape of some fascinating riff patterns, along with squealing thrashy leadwork and Rasta’s vocals cutting through in a raw but dynamic manner.

Continuing in the utterly brutal style its predecessor ended on, Locked, has ear searing riffs to open, an insanely brutal vocal delivery, off-set by spoken elements, it’s an assault on the senses and only seventy-seven seconds long, it’s intense, compact and superb.

Hours As Battlegrounds is another slow haunting builder, deceptively powerful and packing a massive punch despite being slower in pace overall than many of its predecessors, ebbing and building in such a dark and sinister manner you can’t fail to be drawn in and you are treated to a superb burst of leadwork in the latter part of the second half.

Finally, Last Supper, heavily ominous to open, is punctuated with squealing guitar work, the raw riffs and vocals offset in the second half by a superb swathe of soaring leadwork.

I think Decapitated have dropped the album of their careers (so far) with Cancer Culture. For me it encapsulates the power and technical mastery that drew me to the first release of theirs to cross my path and seize my attention, 2006’s Organic Hallucinosis, along with the groovier accessibility of Carnival Is Forever, Blood Mantra and Anticult.

As a band Decapitated has repeatedly battled against all the odds and come out on top. With a dogged determination that has paid off with this album, Cancer Culture is a superb listen from end to end.

I can’t fault any aspect of it. 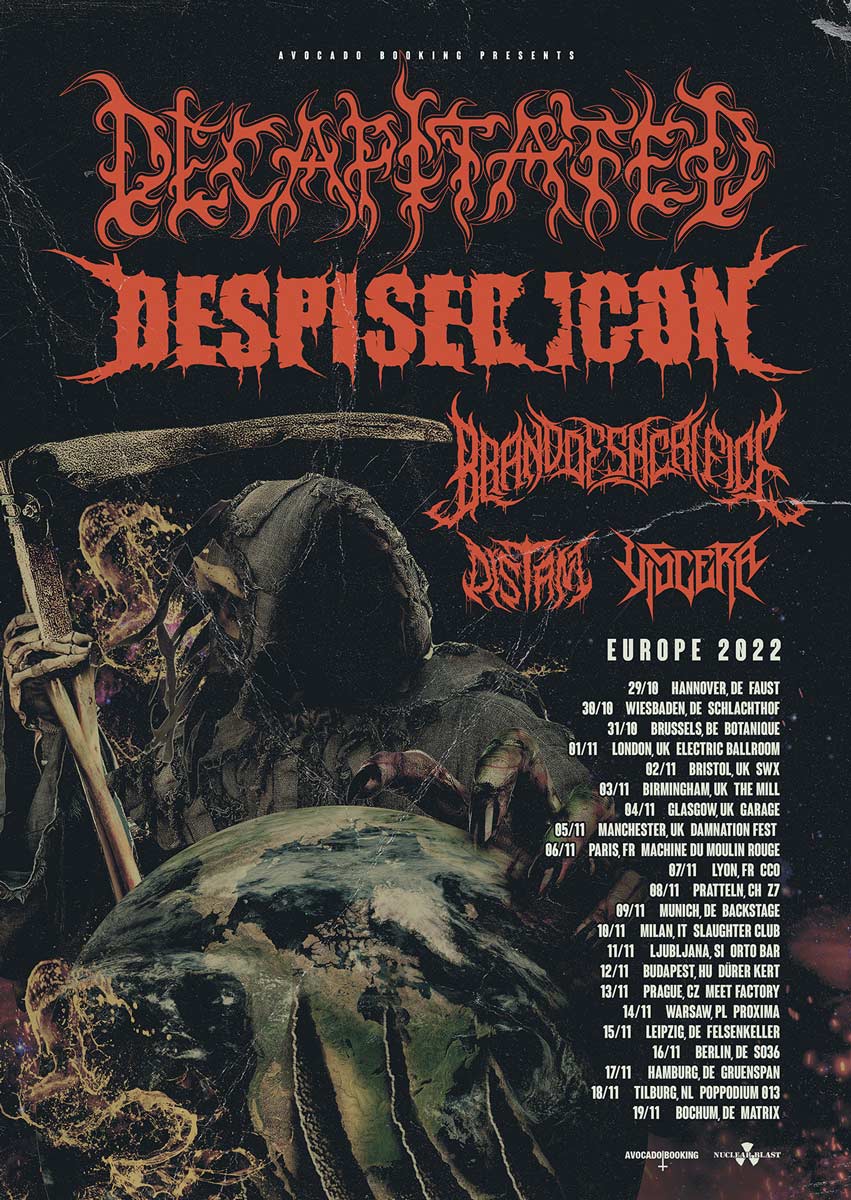