David Lee Roth, who will be 67 on 10 October 2021, has announced his retirement in a one-sided discussion with Las Vegas Review-Journal.

“I am throwing in the shoes,” Roth told the Review in a phone call. “I’m retiring. This is the first and only official announcement. You’ve got the news. Share it with the world.”

Roth spoke about “the departure of my beloved classmate,’ Eddie Van Halen, saying, “I am encouraged and compelled to really come to grips with how short time is, and my time is probably even shorter.”

He has five shows scheduled at House of Blues in Las Vegas beginning New Year’s Eve and running into early January, which he says will be his last shows.

Roth said he had been speaking with Alex Van Halen. “Al and I have been talking,” Roth said. “I can’t speak for him just yet, but he knows what I am about to say. We speak to each other constantly, two or three times a day. We laugh like pirates.”

With Roth saying that he thought he “might have been the first” Van Halen member to pass, he also suggested that his doctors and “handlers” have told him that he endangers his future every time he goes on stage.

“I’ve given you all I’ve got to give,” Roth said. “It’s been an amazing, great run, no regrets, nothing to say about anybody. I’ll miss you all. Stay frosty.

The Darkness to tour November/December with British Lion supporting 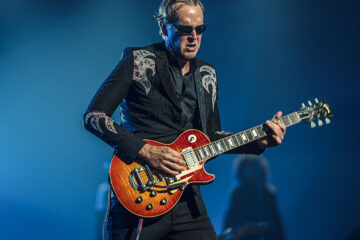