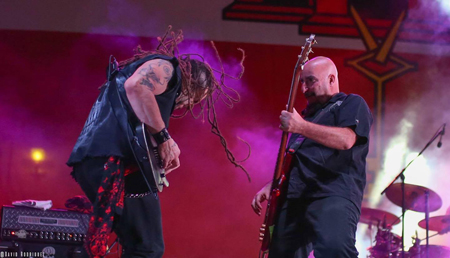 It’s almost three years since Breed 77 last trod the boards and although they hadn’t officially split up, they had quietly drifted away leaving the mystique that one day they might find themselves all singing from the same hymn sheet again, so to speak.

With a request from their own Gibraltarian government to headline the National Day celebrations in the salubrious surroundings of the huge Casemates Square, there wasn’t too much thinking needed before accepting the offer.

The band is the ‘Insects’ line-up and all the guys have taken time out from their current projects to be here tonight. Danny Felice and Stuart Cavillas have been touring the UK and Europe with The Heretic Order while Paul Isola & Friends is a successful project for the vocalist. Pedro Capparos has just released the debut album with his band L’Anima and Oscar Preciado has been working with Reverted and Were I Blind so these guys have not been idle. 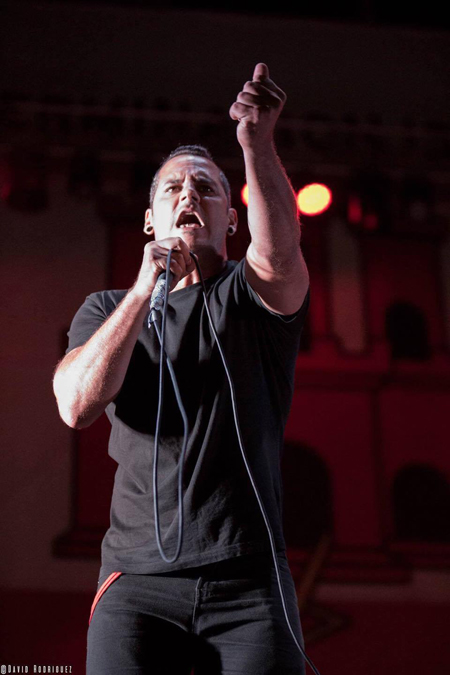 2017 marks the 50th anniversary of the 1967 referendum in which Gibraltarians overwhelmingly rejected proposals for Spanish sovereignty, and with their staunch stance of Britishness unwavering, this was indeed going to be a special occasion.

After the eclectic sounds of Jetstream’s pop/rock and Heritage’s reggae beat which included a spectacular firework display, Breed 77 hit the mammoth stage to a hero’s welcome with ‘Calling Out’, and the energy coming from the band is quickly transferred to the crowd.

Gibraltar has a population of thirty thousand people and it almost felt like they were all in attendance, though in reality the square was bulging at around the four thousand mark, all dressed in the national colours of red and white and ranging from small children through to grandparents whose level of patriotism is almost fanatical and highlighted by the enormous Gibraltar flag adorning the back of the stage. 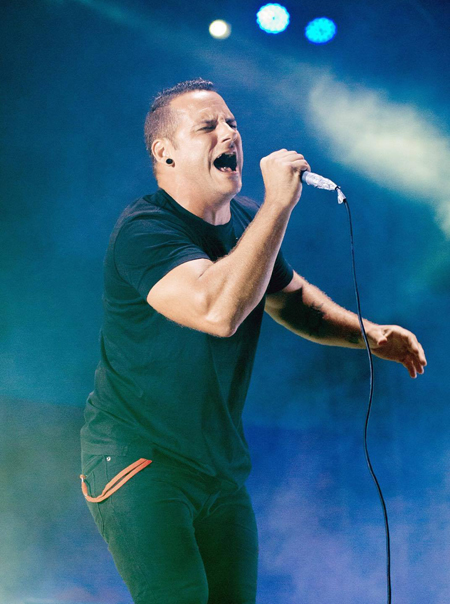 The frantic opening of ‘Matter Of Time’ led into the calmer middle section with Isola asking the audience to “hold your hands up to the sky”. “Are we gonna do this?” was more of a demand than a question and the classic lyric of “I jumped off a mountain to see if I could fly”, suggested he probably could.

After some nasty feedback gremlins, ‘Worlds On Fire’ took the heat up a degree or two, with the line “Wake me from my dream”, followed by a brace from the last album release, ‘The Evil Inside’, the fist punching ‘Fear’ showcasing some tasty guitar from senor’s Felice and Capparos.

Isola introduces ‘Petroleo’ as a bit of Flamenco Metal after exclaiming: “We are Breed 77 and we have come here to kick your ass”, which they duly proceed to do in gold medal style. With it’s palmas hand clapping leading into a ferocious riff, this song really gets the crowd going and the swathe of red and white really is a sight to behold. 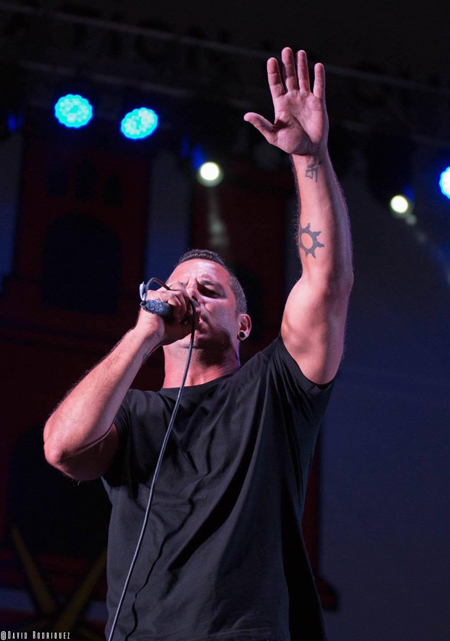 The next song is a bit of a surprise as ‘Tomorrow’ hasn’t been played live for over fifteen years, and Isola quips: “So if its shit you know why.” It wasn’t shit.

The haunting ‘Floods’ is next and whilst Felice produces some inventive guitar sounds, the impressive lighting dims to Isola’s command to accentuate the effect of this extraordinary song, which in light of the current wrath Mother Nature is dealing the planet, couldn’t be more apt. 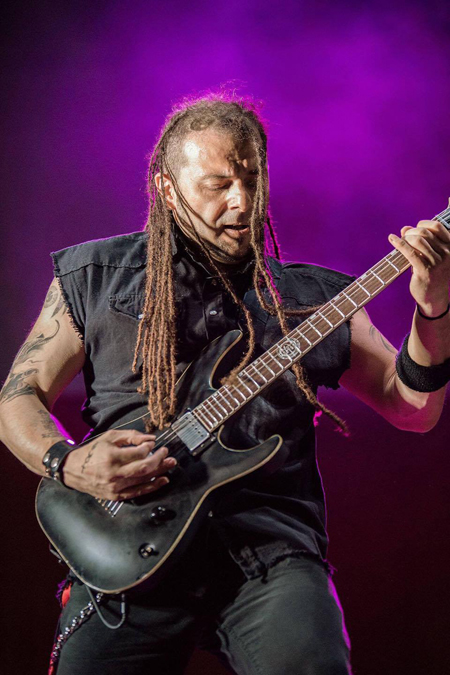 ‘The River’ is probably the band’s most well-known song, breaking into the top forty charts back in 2004 shortly after the band were awarded Best New Band’ by both Kerrang! and Metal Hammer, and after a false start it didn’t take long for the audience to take over the vocals to this powerful ballad. This timeless masterpiece will live on forever.

An emotional ‘Breaking The Silence’ was dedicated to everyone who had lost loved ones recently, most notably guitarist Danny who pointed poignantly to the sky, and bass player Stuart. This was a real goose bump moment with Preciado providing the Flamenco beats to perfectly accompany the acoustic guitars of Felice and Capparos.

A rousing version of the Queen classic ‘We Will Rock You’ had Isola declaring a public holiday for all the following day and it’s a safe bet that quite a few took him up on it. With the circle pit reaching fever pitch during the time change, things were stepping up a gear and ‘Drown’ once again featured searing solos from both guitarists with Cavillas punching the air with a huge smile on his face. This guy was happy to be back, even if only for one night. 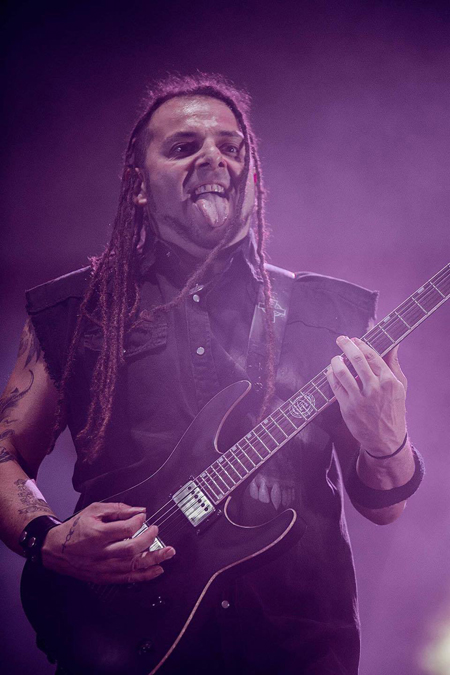 The brutal riff of ‘Insects’ and overall heaviness of the title track from this line-up’s classic album ended the main set on a high, and with the crowd demanding more the band return to the stage with the singer sporting a Heretic t-shirt, showing support for his hermanos.

‘Zombie’ is probably more synonymous with Breed 77 than it is with the Cranberries these days and the sight of the band bouncing up and down in unison with four thousand fans screaming “No more war” is something that will live with me forever. This is clearly how this anti-war song was really meant to be played. 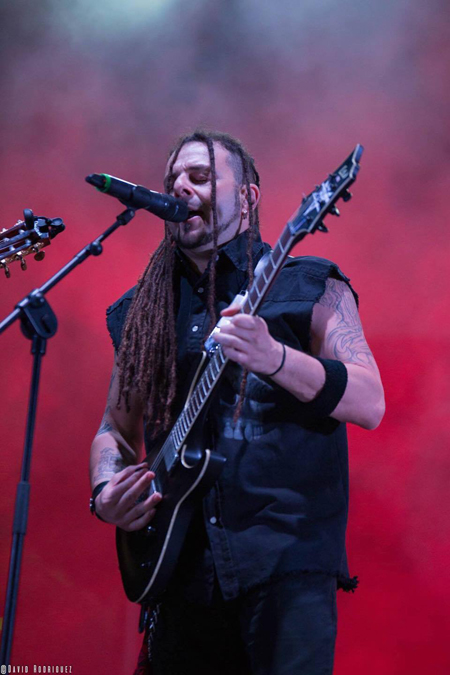 ‘Blind’ is such a contradictory song, so melodic yet so brutal with Isola death growling “Blind” and interspersing English with Spanish, something that works so well to great effect.

‘La Ultima Hora’ closes the show, with Isola claiming: “This really is the end”. Was this cryptic or just plain simple… I have no idea, though I know what I’d like to think. 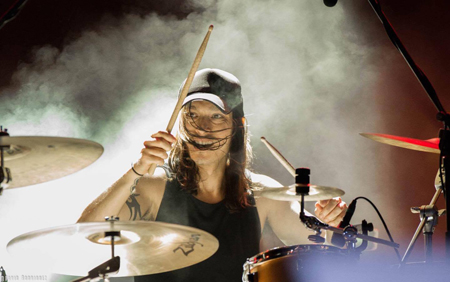 The set was well thought out and culled from all five albums, showcasing the Breed’s true diversity from mellow acoustic and Flamenco through to electric rock and Metal encapsulating everything that’s good about this fine band.

I might just start a petition for Breed 77 to headline Gibraltar National Day every year. Same time same place next year is unlikely but wouldn’t that be something to look forward to.