George Orwell once said, “In real life, it is always the anvil that breaks the hammer”, and there is no quote more fitting to the story in hand. 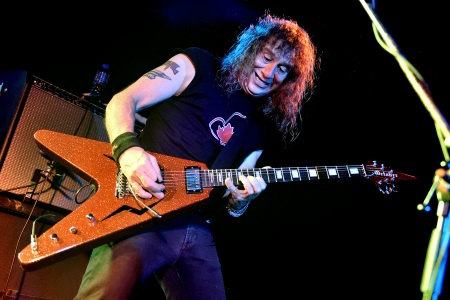 The very fact that Anvil the band even exist to this day is a testament to their sedulous mindset that has seen a multitude of broken hammers cast aside along the well-trodden path in their quest for glory.

Recently inducted into the Hall Of Heavy Metal History, it’s exactly ten years on from the release of the Sacha Gervasi directed rockumentary that showed the many struggles the band had at that time just to get a tour together or get a record company executive to even listen to their latest offering, showing the Metal (sic) of the men.

After years of adversity, this new award is just reward for their unswerving determination and passion in what they believe in, though persuading other people to also believe in it has at times proved hard. 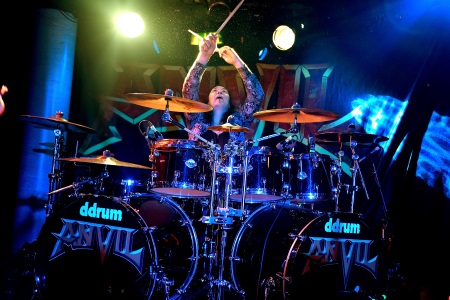 They first set out on their high school pipe dream with their debut release thirty seven years ago and with the brand spanking new album released last month (listen to Robb Reiner’s track by track analysis here), MetalTalk couldn’t wait to subject our ears to some Hard ‘n’ Heavy Anvil noise pollution.

‘Pounding The Pavement’ is a slab of molten Metal so hot you will need blacksmith’s gloves to put it on your death deck and asbestos headphones to listen to it.

The band’s seventeenth studio album harks back to classic early days of their most successful long players, something that is very much en vogue at present, with more and more bands trying to recapture past glories, with varying degrees of success.

This offering though is very much at the top end of the variant, something that has been borne out by the band achieving their first ever placing in the UK charts, warming things up nicely for their forthcoming UK and European jaunt, and I for one couldn’t wait for this gig to come around. 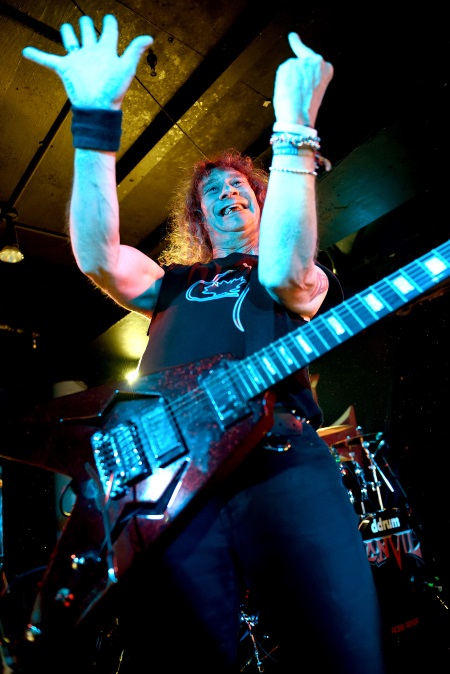 Tonight is the first night of the UK leg of their forty-seven date European tour. There is no shortage of promoters these days and tagging along as special guests are Burnt Out Wreck who are steadily making noises and a name for themselves busily gigging, supporting numerous bands over the past few months.

From the ashes of Mothers Ruin, former Heavy Pettin’ drummer, Glaswegian Gary Moat, has put together a solid rock’n’roll band, who have great tunes with a lovely blend of hard rock, bluesy swagger, and a good time groove that guarantees to leave you with a smile wider than the River Clyde, and let’s face it, that’s what it’s all about.

From the beautiful double entendre suggestiveness of ‘Swallow’, which is really a kick in the teeth to the Tories, and ‘Pullin’ It Out’ where Moat bemoans that she’s always pullin’ it out whenever he sticks it in, to the lively ‘Medusa’ with blistering guitar from Adrian Dunn, before ‘She’s A Dirty Love’ moves into the slower tempo of ‘Flames’ and ‘Rockin’ Man’. There’s something for everyone here.

The band close the set out with the Brian May produced Heavy Pettin’ classic ‘Rock Ain’t Dead’, which had the curious in the crowd rockin’ out for all their worth.

Burnt Out Wreck are not burnt out or a wreck, and if they carry on at this rate they will be coming to a town near you very shortly, only this time as headliners.

The special guests pulled in a decent crowd, but such is the buzz about Anvil these days, by the time the announcement “Anvil is Anvil and we play heavy fuckin’ Metal” is made, the place is rammed to its capacity. 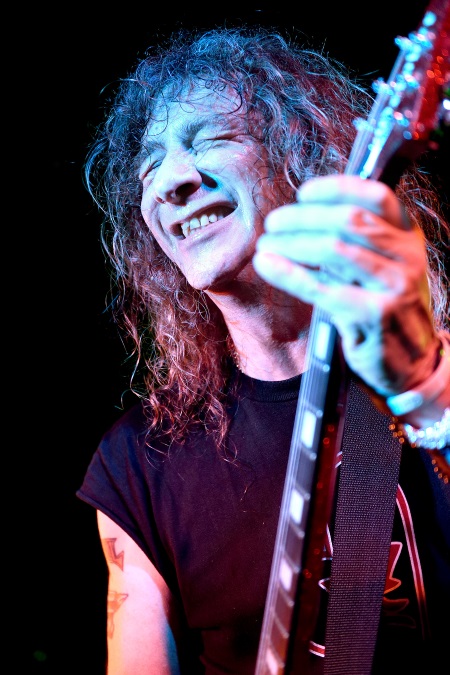 Anvil hit the stage with ‘March Of The Crabs’ which gets the crowd itching for more, and Lips wastes no time in meeting the fans as he heads straight into the crowd; brilliant fun. ‘666’ is a devil of a song and makes it a double dosage of ‘Metal On Metal’.

The boogie of ‘Ooh Baby’ with its Ted Nugent feel brings a cool contrast to the openers, and ‘Badass Rock ‘n’ Roll’ does exactly what it says on the tin, and is indeed “a window to your soul”.

Lips introduces the next song by saying he’s never compromised one second of his career, and that the song is about “my philosophy”. ‘Doing What I Want’ is the first new one tonight and it’s infectious opening riff and the repetitively sung title are delivered by Lips with equal conviction and you just know he bloody well means it. 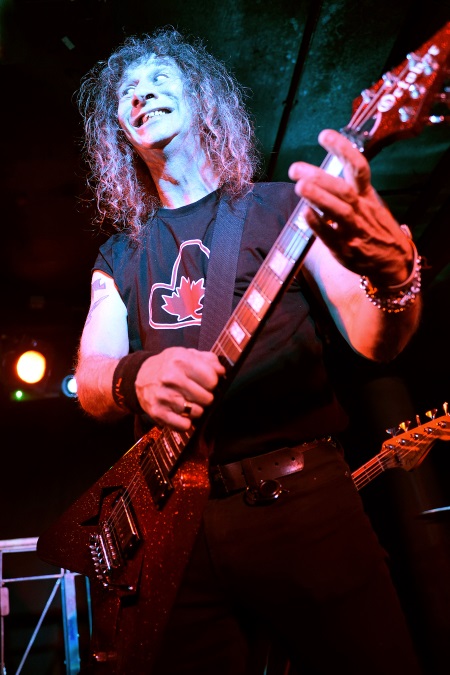 ‘Winged Assassins’ is preceded by some nifty bass lines by Chris Robertson backed up by the double kick of Robb Reiner, and along with next song, ‘Free As The Wind’, which Lips dedicates to the great Lemmy, completed the ‘Forged In Fire’ contingent for the evening.

It’s bloody hot in the Underworld, of course it is, and ‘On Fire’ does nothing to diminish the pyretic atmosphere. ‘This Is Thirteen’ brought about another dedication, this time to the recently passed Chris Tsangarides who produced a trio of early Anvil classics before being brought back in to help revive the band in 2007, and Lips seems genuinely moved before breaking into the title track. 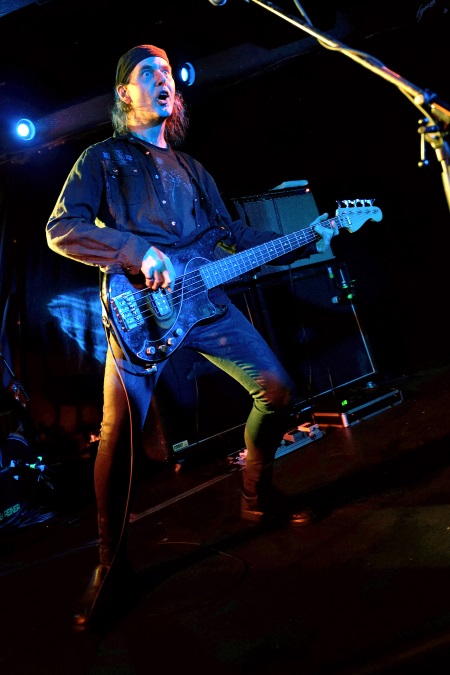 With the phallic symbol tossed off the stage the band bring the song to a climax. Is it any wonder Lips has a permanent smile etched on his face? This guy just loves his job and I’m pretty sure I haven’t seen a happier guitarist up on stage ever, revelling in the fact, as he tells the crowd, that he hasn’t done a food delivery in ten years. 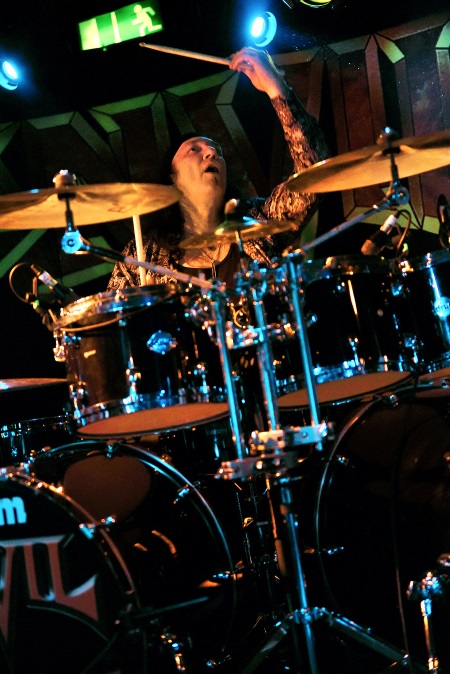 It is in fact an infuriating rant about the female voice resonating out of the worlds in-car SatNav systems, a tad un-PC for sure, but hey, let he without sin cast the first stone; we’ve all been there right?

Probably the only song ever written about global positioning systems, and it’s brilliant. Who would have thought it, eh? Well Lips obviously. Pirate song ‘Daggers And Rum’ and ‘Swing Thing’, including Robb’s drum solo lead into the final new song of the night, unfortunately. 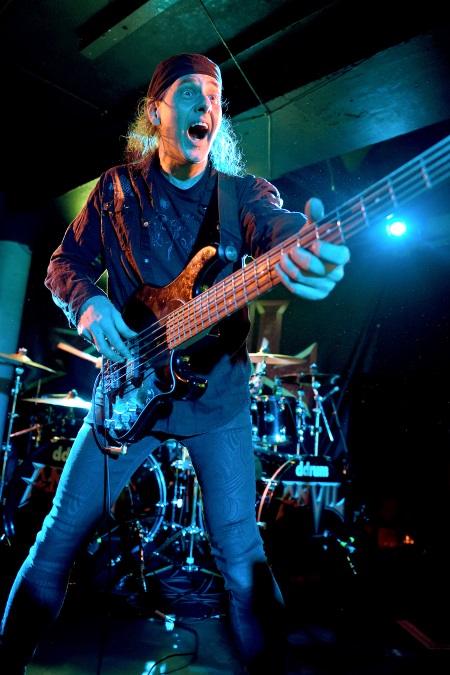 ‘Ego’ is a rabble-rousing stormer of a song, in keeping with the rest of the strong new material, and it’s certainly not written about this band.

‘Die For A Lie’ makes way for main set closer ‘Metal On Metal’, it’s bludgeoning riff signalling mass lunacy down the front. This song is an unadulterated Metal anthem that renders grown men who should know better, to act like teenagers, and we wouldn’t have it any other way. 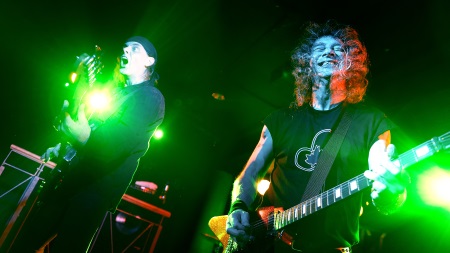 The well-deserved encore of ‘Born To Be Wild’ brings a wild night to an end, and although it is without doubt a great song, a classic even, I can’t help thinking the audience would have been better served with another new song, ‘Rock That Shit’ for example, one of the new album’s highlights. 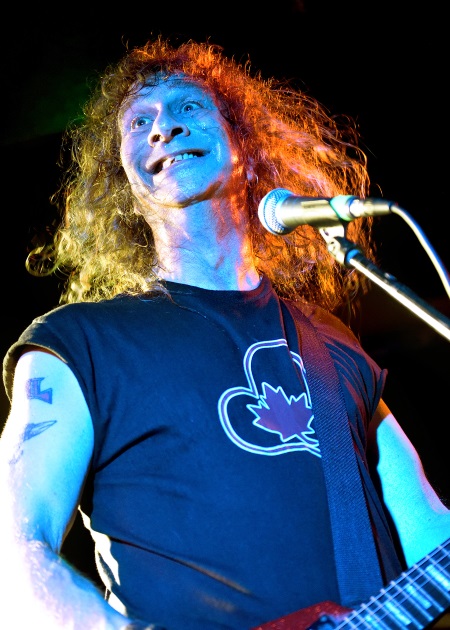 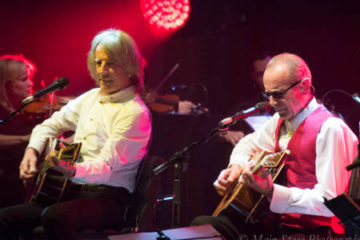