The extensive 6 LP, 4 tape boxset also includes a 7″ alongside a 60 page book and DVD. It has been compiled and curated with the band and features content from their personal archives. 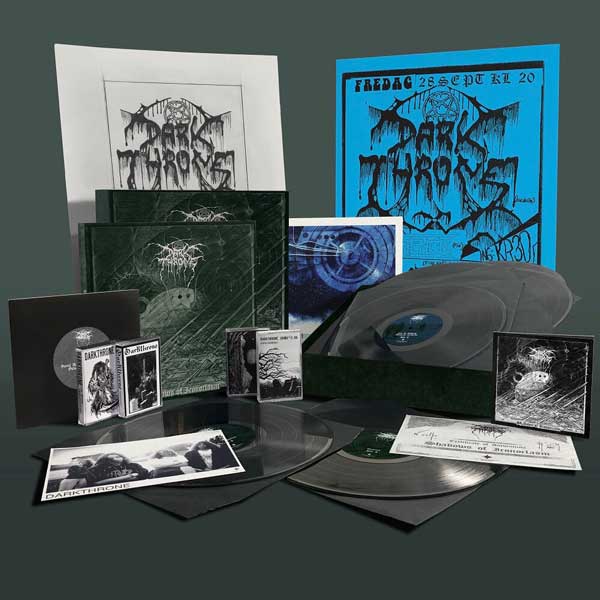 Fenriz told MetalTalk: “We only had a few months to write what would become ‘A Blaze in the Northern Sky’ and we had to blacken up a whole song from the ‘Goatlord’ session and here and there on ‘A Blaze…’ you can hear a few riffs from ‘Goatlord’.

“Ironically I ended up listening way more to the ‘Goatlord’ album than I ever did with ‘A Blaze in the Northern Sky’.

“Maybe because ‘Goatlord’ feels super-real to me and I want to thank Patrick Engel for cleaning up the rehearsal sound without manipulating it much.

“The real sensation in this box is the live performance from Bootleg Stage Oslo 1990, soundboard sound with live performances of several of the tracks from our Goatlord album.

I was so stoked when I discovered this and no, I never had this on video myself, so it was the first time I heard the audio now after over 30 years and it made me very happy. It was a non-alcoholic stage but we were pretty wasted too!”

The set can be ordered from darkthrone.lnk.to/ShadowsOfIconoclasm.

-Live in Oslo November 1990 –a new digital transfer from the original master tapes from the Bootleg TV archive. Previously unreleased.

– 60 page book with a large collection of band photos, plus text covering the early years of the band as featured in the ‘Black Death & Beyond’ book, including additional text for this release, plus bonus chapters compiled from rare Darkthrone titles