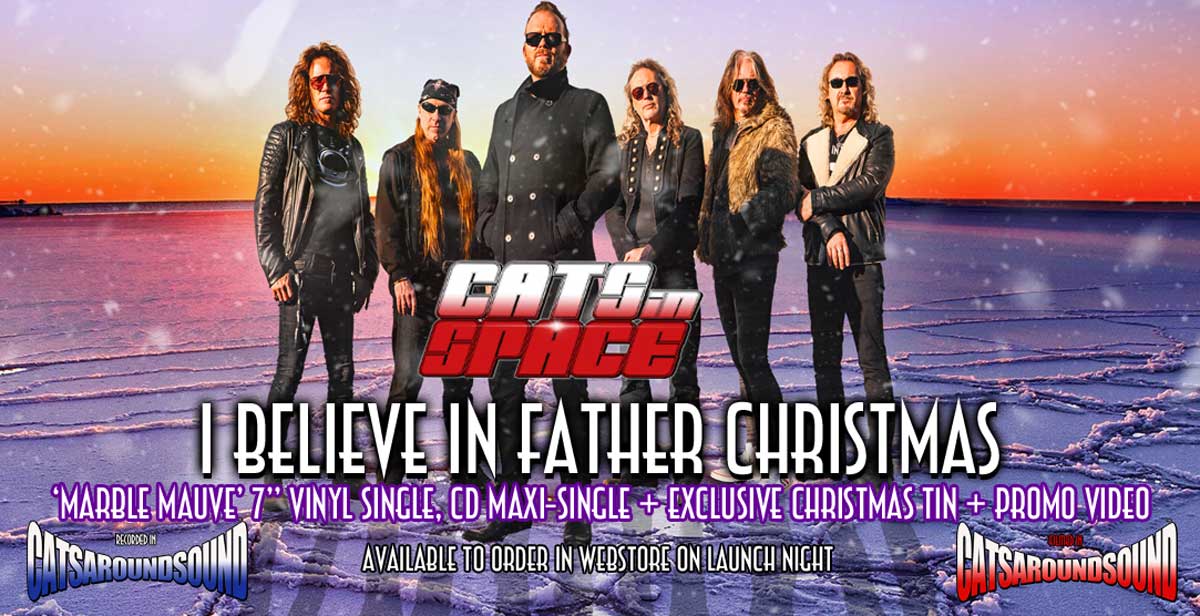 What is this that’s just landed, fresh from the spaceport? Only another festive record from groovy melodic rockers Cats In Space. Following their original, My Kind of Christmas, in 2019, this time they have covered a timeless classic.

Cats In Space – I Believe in Father Christmas

Not Fur-osty The Snowman, Fleas Navidad or Litter Drummer Boy – oh no they’ve only gone and plumped for I Believe in Father Christmas by Greg Lake.

That’s a pretty audacious act, going for a song as massive as that. Anyone else, and there may have been a heart in mouth moment in case it’s, well, a bit rubbish, really. But this is Cats In Space, a band whose blueprint of huge epic rock means they can be trusted with this sort of stuff.

“This Christmas, we have decided to take on, what we feel is, the greatest festive song of all,” the band told MetalTalk. “It’s a song that fits our music style, and we all agreed that it would be amazing to record our own huge, epic version. Indeed it’s something that we’ve all wanted to do since the band started.

“It feels that now is the right time, and the sentiment is perfect. Tinkering with such a classic is not something that we have taken lightly, but we have always said ‘Go Big or Go Home’, and we promise you our version is massive.”

It’s difficult to improve on perfection, and it’s a wise decision of the Cats not to muck about with it, sticking to the structure of the original. It’s all here, the beautiful dreamy acoustic guitar, Troika, big choral harmonies, dramatic arrangements, all present and very much correct.

What enhances this track from a straightforward carbon copy is that it is soaked with the personality of the band. Recorded in their unique ‘Catsaroundsound’, there is the velvet vocal tones of Damian Edwards, luscious, layered harmonies and a vast soundscape, possibly what Christmas on Jupiter would sound like. The superb orchestral arrangements from keyboardist Andy Stewart are a triumph.

There couldn’t have been a better choice for the cover, and it’s a flawless performance.

One thing that you always get with Cats In Space is added value. The single is available from all usual digital outlets and directly from their webstore in several formats. There is a limited edition Marble Mauve 7″ vinyl, a CD single, and the stunning Catmas Tin Mark II with an exclusive 7″ sleeve for the vinyl and an expanded signed CD alongside a photocard and a host of Catmas goodies.

The additional tracks for the expanded CD are an acoustic version of the single, stripped back and super charming. There’s a new version of My Kind Of Christmas with re-recorded vocals, the same treatment as the cream of the back catalogue in this year’s retrospective Diamonds. Finally, Seasons Change from Atlantis always fits perfectly into any festive playlist, and here it’s had a festive glow up with added sleigh bells.

It’s a fine end to the year following the Dive Into Atlantis tour, and the spaceship is carrying plenty more payload to be deployed next year.

Before then, there will be an accompanying festive video and official launch for this single – the band are currently in discussions with one of the UK’s leading charities, so watch this Space. And there’s one more chance to catch the band live this year at their headline show on 11 December at the Patti Pavilion in Swansea.

If this Christmas we get what we deserve, then it’s safe to say that we’ve probably been fairly good. See you under the Meow-sltoe.