American singer/songwriter Arielle has today released the new single ‘Peace Of Mind’, taken from her album ‘Analog Girl In A Digital World’, which is due for release 7 May 2021.

Recorded in Nashville and Austin, Texas, the songs on ‘Analog Girl In A Digital World’ were recorded in one take, with the recording process divided between digital and analog tape.

The album features The BMG Arielle, the new signature Arielle guitar which is due for release March 2021 and can be ordered from Brian May Guitars

Brian May told us: “This is the very first guitar that Brian May guitars has ever offered that is not based on my original Red Special. Designed by and named after Arielle, it is a new dimension.

“To understand why this guitar was irresistible to me, you have to hold her in your hands. The guitar is light, smooth and agile.

“Arielle is an awesome musician. She is a truly phenomenal player, with an ability to produce the most beautiful tones as well technical mastery. We collaborated in making the Arielle a new mission to guitarists everywhere – to open up a new door to excellence.”

“Arielle’s playing reaches places I never knew existed. I believe this guitar will do the same.”

While Arielle may be a child of the new millennium, she takes inspiration from the methods and styles of creating music in the 60’s and 70’s, when music creation skills, or lack of, could not be hidden by technology.

Arielle told MetalTalk: “I project those principles inside my music. The album takes you on a journey through the trials, tribulations and confusion of an old-school artist in a fast-paced world.”

Stay tuned to MetalTalk, as we will soon be featuring an in-depth interview with this remarkable artist.

Pre-order ‘Analog Girl In A Digital World’ at smarturl.it/officialarielle

Suzi Quatro / 'The Devil In Me' is a gem, chock full of surprises

Suzi Quatro / Alice Cooper and I "had a dart gun fight in a hotel..." 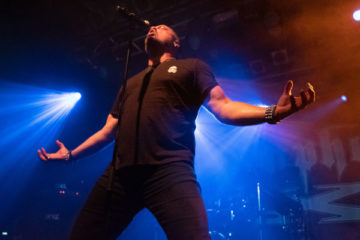