BONNIE TYLER STRIKES GOLD IN A STARRY NIGHT AT THE PALLADIUM 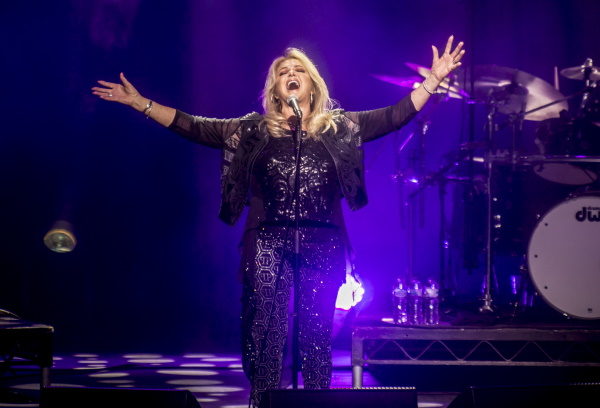 It’s late Spring and over at MetalTalk Towers the list of gigs available for review for the upcoming season has landed. Among the standout names, Bonnie Tyler’s 50th anniversary show was shining brightest of all. Of course, there was the small matter of getting this past the Editor in Chief first.

The look on his face as he digested the news, looked back at the site banner to reassure himself he was still in the right place and back to me suggested that he didn’t share the same glee.

“You want to review Bonnie Tyler … for MetalTalk?”

His continuing glare gave the hint that a bit more explanation was required.

“Well she worked a lot with Jim Steinman, and Bat Out Of Hell Musical was your gig of the year… she did Eurovision and Lordi won that once … Francis Rossi is on her new album…”

“Err… yeah…” I say weakly, gesturing to where the shelves containing my hundreds of reviews, thousands of news articles, and dozens of radio shows would be if they weren’t all digital. “Plenty of Metal. Oh and Bonnie did a collaboration with Alex Rudi Pell a couple of years back.”

By the time I’d added the piece de resistance that Paul Di’Anno duetted with her on Austrian TV singing ‘Bridge Over Troubled Water’ after Lenny Kravitz dropped out, I’d stacked up all these tenuous connections up on top of each other to form the bones of a case. Along with causing a distraction by loudly streaming ‘In My Sword I Trust’ across the speakers, we were over the line. Yesss.

A couple of months later the support was announced and it was the one and only Cats In Space, the simultaneously retro and modern glam rockers, confirming my conviction from the start that the London Palladium was the only place to be tonight.

And so it proved. As expected the Cats absolutely stormed the theatre, pitching the set perfectly for the audience, the infectious grooves of ‘Johnny Rocket’ heralding a classy set that took in the big emotions of ‘Scars’ and ‘September Rain’, and hook-filled and bursting with energy ‘Hologram Man’ and ‘Five Minute Celebrity’, that if not causing dancing in the aisles due to the pitch of the seats at least had everyone bopping in their chairs. 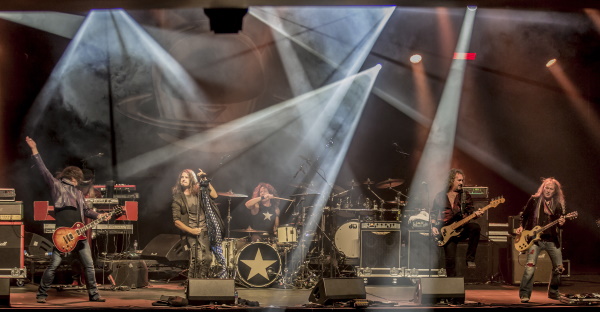 New vocalist Mark Pascall, on only his third gig with the band proved his cat class and style with dreamy lush vocals – it’s a special gig for all the Cats, but especially so for one.

The London Palladium has had countless prestigious moments in the entertainment industry, and legendary comedian Arthur Askey was such a veteran of this venue that he is on the hall of fame by the stage door. Before our very eyes we witnessed his grandson, keyboard player Andy Stewart, continuing the family tradition, and honouring his legacy by wearing Arthur’s own enamel pin badge on stage. 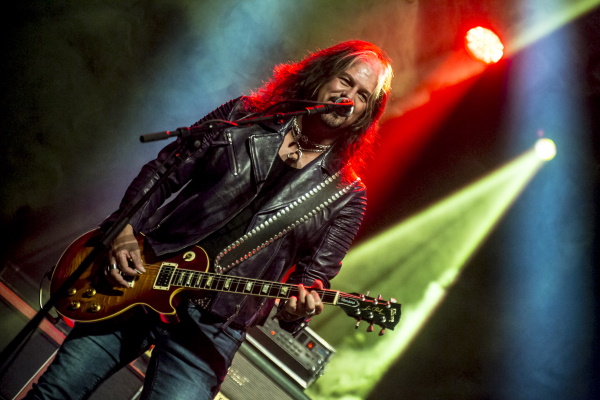 There was another tribute too as Greg Hart gave a heartfelt dedication to the great AOR vocalist Tony Mills, who had sadly passed away earlier that day, dedicating ‘Thunder In The Night’ to him. A moving and celebratory set which undoubtedly will bring plenty more fans when the spaceship next lands. 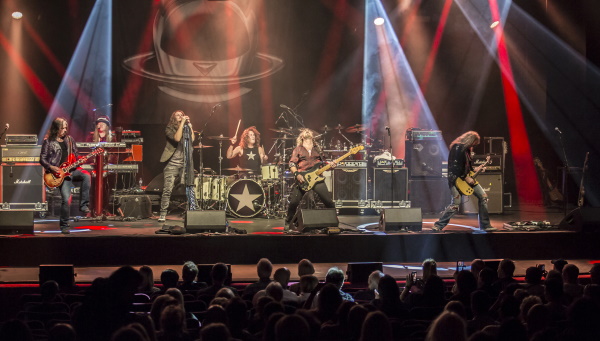 Now sixty eight years old, Bonnie Tyler is celebrating fifty years in the business, and she’s looking and sounding damn good for it – she’s weathered the storms better than a lot of her peers, and although a reduction in power and range is inevitable, it’s not nearly as severe as could reasonably be expected – these pipes are very much still in working order. 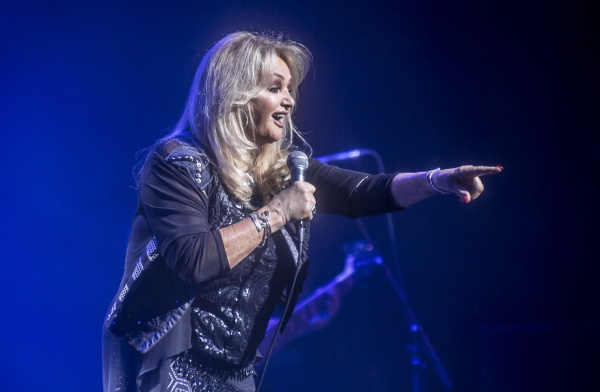 With half a century of global performance experience on the biggest stages, it was no surprise that her professionalism shone through as she absolutely owned the space. A thoroughly engaging and likeable personality, she pointed out and chatted to family members, friends and colleagues in the audience, putting into context the setlist which was a walkthrough of her long career. She has the ability to shrink the walls and make you feel like you are in her front room hanging out. 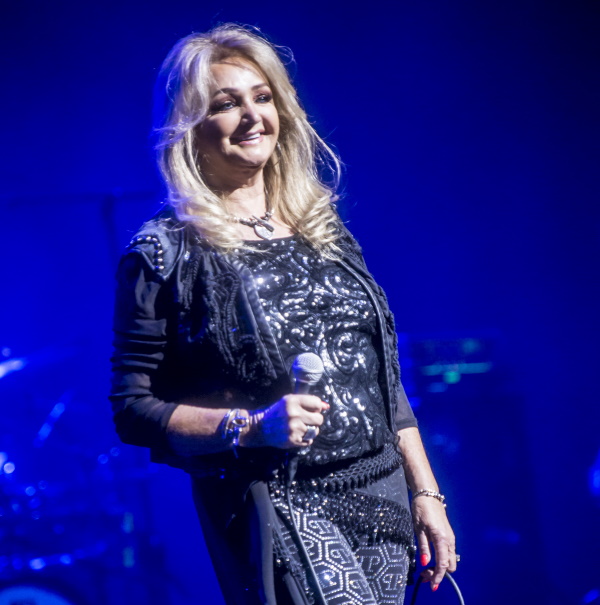 Of course her stage presence is legendary, especially that notable performance at the notorious 1988 Reading Festival. Appearing on the bill with Uriah Heep, Starship and Meat Loaf, and being on the receiving end of bottles being thrown, instead of retreating she carried on, and ended up winning the crowd over leaving to huge applause – a very Metal attitude.

We started with the rocky ‘Flat On The Floor’, and for the full set she was backed by her fantastically tight four piece band, with no need of a huge production. There’s standard AOR fare, there’s funk, there’s blues – the latter where the band really shone. 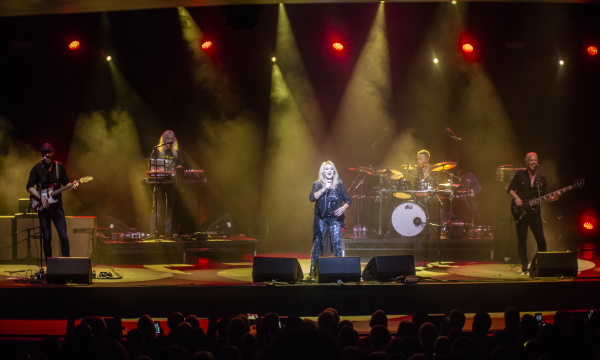 Newer cuts like ‘Move’ and ‘Bad For Loving You’ fitted well with the old chestnuts ‘Lost In France’ and ‘It’s A Heartache’ but it was ‘Total Eclipse Of The Heart’ and ‘Holding Out For A Hero’ which everyone went nuts for.

Her new album, ‘Between The Earth And The Stars’ got a good showing, interspersed with the big numbers and the hits, and much more pleasing formula than leaving the latter until the very end. 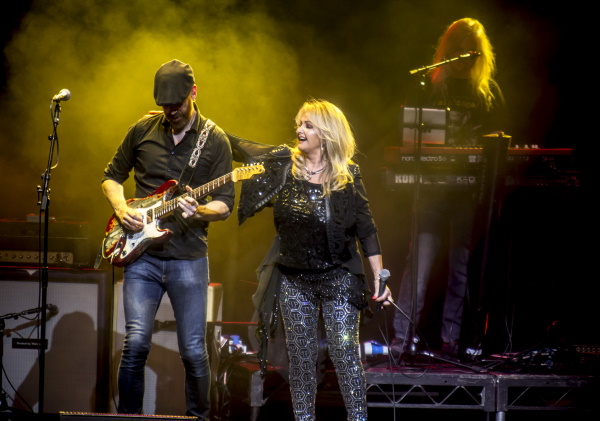 ‘Faster Than The Speed Of Night’ ended the main set and we were treated to a five song encore encompassing her influencers Janis Joplin and Tina Turner, ending a golden night.

The final song was ‘Older’ from the new album, with the poignant lyrics “Cos love like this doesn’t get older, it just gets older, we just got older”. I know how you feel Bonnie, but you have ten times the energy of me – can I have some of what you’re having? 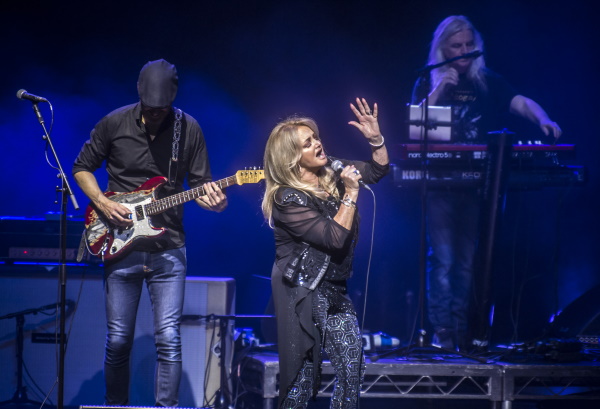 Setlist:
Flat On The Floor
Hold On
Have You Ever Seen The Rain
Seven Waves Away
Move
Lost In France
It’s A Heartache
Let’s Go Crazy Tonight
Bad For Loving You
Total Eclipse Of The Heart
Between The Earth And The Stars
Faster Than The Speed Of Night 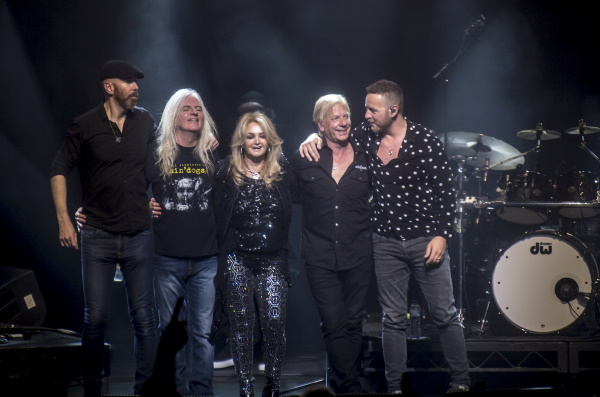