We are on a bit of a high here this afternoon. Bloodstock Friday topped us up with all of the natural happy chemicals that only live Metal in abundance can provide.

Looking back, there was so much to pack in last night. In between the main stage acts, The Sophie Lancaster Stage hosted a pair of banging sets, first from the blistering thrash of Evile, who truly did unleash hell as promised and Conan, purveyors of Doom Metal, who told us last week how much they were looking forward to playing and how they would do a set of their well-known classic songs, which they did, to great appreciation.

Häxan thrilled as headliners on the Jägermeister stage, the Welsh power trio bringing us highlights from their Release The Girls tour stuffed to the brim with hooks, harmonies and hell-raising attitude.

And so to this morning, with Saturday and Conjurer providing great entertainment on the Ronnie James Dio stage with lush melodic passages mixed with growls so loud the water bottles were bouncing across the stage.

The Sophie stage is also getting a great wake-up call as Netherhall showcased progressive sounds from their debut album.

It had to happen, this is a UK festival after all, and the first drops of rain all weekend have started to fall. It’s that fine rain that soaks you through but looks like only showers for an hour or two. We don’t need to fire up the ark yet.

Shout out to the Welfare crew who, come rain or shine, are doing a fantastic job looking out for everyone, making sure that the drama and carnage are kept to the stage where possible.

Back on the main stage Wargasm and Malevolence kept up the sonic booms to blast the rain clouds on their way, both bands pulling in a healthy crowd. Wargasm had their set moved around and settled in this slot after Sylosis succumbed to the dreaded isolation. Vocalist Milkie Way seriously impressed with her power and charisma.

While She Sleeps are a completely misnamed act, there is no chance of getting a quick afternoon nap while the Yorkshire Metalcorers are around. The set was full of movement and ambition, managing to get plenty of textures and hooks, enormously satisfying their passionate fans.

We will check out what else is happening around the arena now before settling in for the evening’s festivities.

Bloodstock have announced their 2022 lineup.

VAT remains at 5% on tickets, but only until September, so it is recommended to get your tickets early for next year’s festival.

Early-bird weekend camping tickets are available at the on-site box office across the duration of the 2021 event, then will go on sale online at 9 am Monday 16th August, priced at £135 (+ bkg fee) from the ticket store, as well as Serpents Lair VIP tickets, child tickets, and camper van passes (which always sell out very quickly, so don’t snooze if you’re after one). 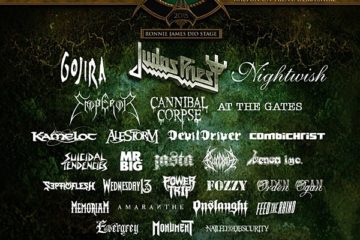