“The human race is doomed and only death is real.” In which case it sounds like it is time for a new Asphyx album and obligingly they are ready “to noisily emphasise that oblivion is definitely coming” with their latest chunk of “mortality-threatening riffs” the ten track, fifty-minute assault on the senses, ‘Necroceros’.

This tenth studio album, recorded during lockdown, is an excellent release. It is hugely apparent that the newly found spare time Asphyx have found themselves with has been put to good use. All their pent-up energy has been expelled into this album, manifesting into something cathartically brutal.

Martin van Drunen told MetalTalk: “As soon as we heard what was happening and the government said there was a lockdown coming, there was nothing we could do and all the shows were pulled.

“So we decided to use the time to our advantage and make an album. The usual way we work is that Paul has a shitload of riffs on the shelf and we say to Tom, our studio engineer, ‘Is it okay if we come over?’ He said yes, but we had to keep the obvious restrictions in mind.

“So, we started jamming with all the riffs and arranging the songs together and from there it came together really fast, because we had more than enough material.” 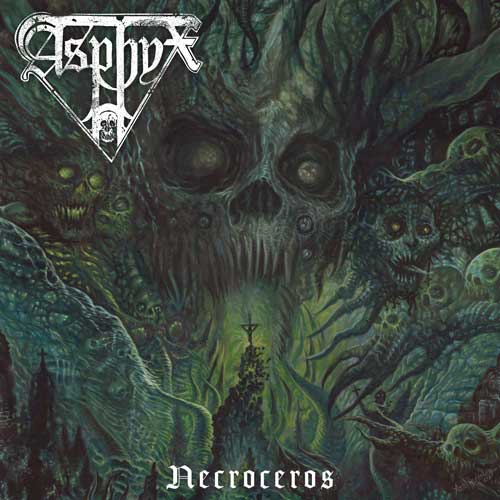 End to end ‘Necroceros’ makes a hugely engaging listen and as is their tradition, Asphyx have continued to focus on death, as well as a few other interesting and warped subjects. What makes it such a good release for me is it is well varied, in both tempo and duration.

There are fast and brutal tracks like the mood setting opener ‘The Sole Cure is Death’, mid paced tracks, the historically inspired, dirty groover, ‘Knights Templar Stand’ and the doomy and crushingly claustrophobic numbers like the two gargantuan offerings; ‘Three Years of Famine’ and the ominously monstrous closer ‘Necroceros’.

One of my favourites is the witty observational ‘Botox Implosion’, which I love for the lyrics. It makes very valid points and I am glad I am not the only person to have considered the points made here.

If you are wondering what has happened to the tradition of having the word “Death” in the album title, well Martin has gone for the academic approach. The title track, ‘Necroceros’ aims to paint a surreal and terrifying picture of the Earth being devoured by some slavering, pan-dimensional colossus.

van Drunen says: “I am sure everybody will ask, ‘What the bloody hell is a Necroceros?’ I am just really into sci-fi stuff and fantasy and suddenly I came up with this word. I said, ‘We always use the word ‘death’ in our album titles, and ‘necros’ means ‘death’ in Ancient Greek…’.

“I mailed it to the lads and they said, ‘What is it?’ I said it was probably going to be some entity from outer space that travels from some parallel sub-universe and finally gets to the Earth and starts to consume it! Paul came up with some magnificent riffs and it just had to be the title track.

“It is a fantasy threat, menacing the Earth after it has destroyed many worlds unknown to us. And I promise I was sober when I wrote it! [laughs]

“Hopefully things will get back to normal soon. Everything from this year is rescheduled for next year, but we did not think it would be like this in October 2020, so we do not know how long this will last. You cannot really plan at the moment. You have to stay optimistic, right? We’ll have to see!

“But for now it seems that ‘Necroceros’ is a murderous masterpiece for the never-ending age of death.”

‘Necroceros’ will be available as a limited edition CD+DVD mediabook, CD, LP, deluxe 2LP+DVD and digital album from 22 January via Century Media Records.

Pre-orders can be made at https://asphyx.lnk.to/NecrocerosPR

ASPHYX have also recently also announced a very special FREE live-stream release show for ‘Necroceros’ to be held on Saturday, 23 January 2021 at the ‘Metropool’ venue in Hengelo, The Netherlands and the event is accessible via the club’s website.

The concert will start at 9 PM CET.

Joey Jordison/ When ‘Metal lives within your heart..you can accomplish anything’ 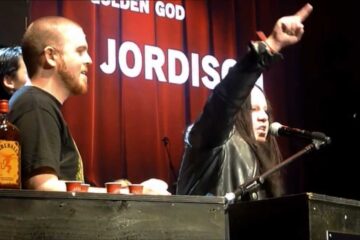