However, along the way, the band parted company amicably with Simon and Stroud, replacing them with ex Methods Of Mayhem guitarist Kai Huppunen and bassist Scott Whalen from Econoline Crush.

‘State Of Being’ is the resulting debut album and all the time spent honing their material in the studio has certainly paid off. This album is proper heavy with crushing riffs, tight drumming and bass and vocalist Jon Howard has a brilliant set of pipes.

The album opens with a spoken word piece ‘State Of Being’ before the crushing riff of ‘Becoming The Enemy’ pounds out. Gutarists Wadell and Huppunen keep up the pace throughout the album and ‘Beav’ is obviously relishing playing on 6 strings again instead of 4.

As mentioned earlier, vocalist Jon Howard is on top form throughout and ‘Instinct’ showcases his brutal scream and more melodic cleaner voice to great effect. The album, as a whole, is a fantastic mix of brutal heaviness and more melodic quiet sections.

‘Breathe’ is aptly titled as it gives the listener a break from the brutal riffing with a wonderful clean single note riff throughout and a really tight rhythm section.

Is this a perfect debut album? In a word, no it isn’t. Most of the songs have a similar feel to them. BUT as a statement of intent, it’s a wonderful place to begin.

Imonolith are a seasoned group of musicians who are finding their own identity and should be applauded for doing so. ‘State Of Being’ is a great place for the band to be kicking off at.

Unfortunately the band’s debut UK tour should be happening RIGHT NOW, but we all know what’s happening in the world, so we shall have to wait until better, safer days until we get a chance to see Imonolith live. I for one will be down the front when that finally happens 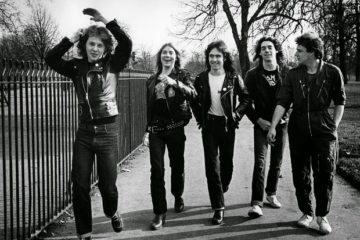