Accept are back with Too Mean to Die. It is their 16th album and features eleven tracks of toxic Metal, all of them guaranteed to pour guitar fire and screaming vocals all over the bad times of 2020, in a way that only Accept can. And hey, even the ballad rocks!

The album kicks off with ‘Zombie Apocalypse’. Clean, chugging distorted guitar starts you off, but it is not long before the high speed mayhem starts, and you know the monster that started the thrash and power Metal onslaught all those years ago has returned. Mark Tornillo’s high-pitched, growling voice, perfectly accompanies the high end riffs and melodic, musical solos.

This is slick production from Andy Sneap that still has that harsh edge that the fans will love.

Wolf Hoffmann spoke with MetalTalk recently (See Part One and Part Two) explaining that ‘Too Mean To Die’ is “a collection of eleven songs, totally straight in your face Metal along the traditions of Accept. Brand new songs in a familiar sound.

“I think the fans are going to get what they are waiting for. Everybody I’ve talked to so far was very excited about it, they say it’s some of the best stuff we’ve done since ‘Blood of the Nations’.

“The last few Accept albums have been strong altogether, but this one, particularly, has been well received so far.”

The title track, ‘Too Mean to Die’ has warp speed riffing, Hadrian-sized walls of drums and screaming vocals. Hoo-rah! This is exactly what every Accept fans wants, craves and needs. The lyrics ooze with defiance, these boys are not even giving in to the reaper. “I’m A Man On A Mission” is the title track’s hook line and with this entire album, it is mission accomplished.

But it is not all chest-beating Power/Thrash/Speed Metal. One of my favourite, stand-out tracks on this album is ‘Overnight Sensation’, with it’s very, very catchy intro that sucks you right in. Combined with light-hearted tongue-in-cheek lyrics, this song has got LIVE written all over it.

The Kardashians even get a mention and it is Accept’s take on instant success without the hard work. Which is a true story, right? Instant gratification, that is what Mark Tornillo sings about, but musical gratification is what we get and I know what I would rather have.

But there is also lots of familiar ground as well. ‘No One’s Master’ is a dark warning for us all against “the man.” Be yourself, be an individual and your freedom guarantees freedom for all.

It is the never ending paradox of Metal, rebels and outcasts who offer salvation to society, while the album’s first single, ‘The Undertaker’ warns us about the darker side of human nature, accompanied by slow tempo riffing and rolling, deep-voice backing vocals that are synonymous with Accept. Tornillo’s vocals change from low voice to high scream in a microsecond and there is a nice crow call at the end. Classy detail.

Anyone as old as me will remember the classic 80’s Accept song, ‘Son of a Bitch’, and ‘Sucks To Be You’ is a bang up to date 2020 version. And after that, the album just steamrollers on, complete with gorgeously overblown intro’s, even an orchestral type melodic guitar solo, with Christopher Williams’ tight drumming holding everything in.

Another highlight comes in the shape of ‘The Best is Yet to Come’. It is a slow, moody ballad about the mysteries of life, a brilliant reflection on getting better, not just growing older. A young band simply could not have written this song with such feeling, while Accept are the guys that have seen it, done it, bought the t-shirt, and are telling us straight. 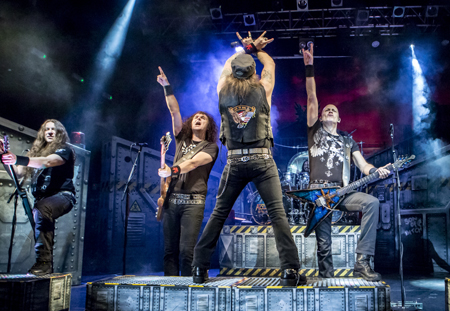 And just when you think you have got Accept all worked out, ‘Not My Problem’ screams in and reminds you of, yes, Bon Scott’s high pitched anguished wailing a-la ‘Beating Around the Bush.

It is an explosive mix of influences, as is ‘Samson and Delilah’, an instrumental that makes me think of Iron Maiden’s riffing, but played with Accept’s own touch.

And actually, I am not so sure Accept were not there first with this sound. It is a soaring, towering historic tome, and an ideal way for the album to crunch to a triumphant halt.

This is an album that consistently plays Metal that is polished in it’s intensity, but still retains it’s rough edge.

How do you do that? I do not know, but Accept do and it is a style that they have been the absolute masters at for years.

So stand tight, Metal fans, because Accept are still aiming high and they are way too mean to die.

Track listing:
Zombie Apocalypse
Too Mean to Die
Overnight Sensation
No One’s Master
The Undertaker
Sucks to be You
Symphony of Pain
The Best is Yet to Come
How do we Sleep
Not my Problem
Samson and Delilah