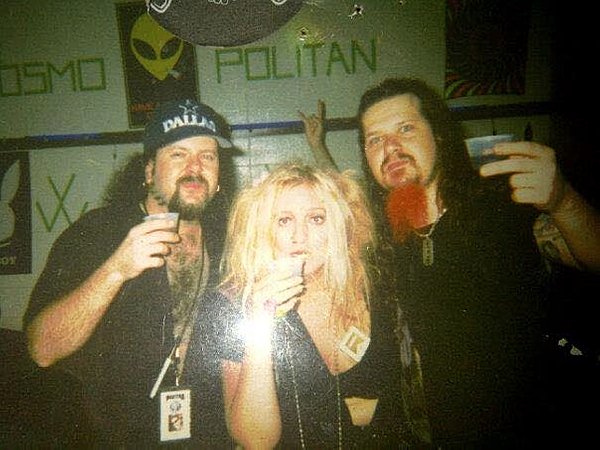 Vincent Paul Abbott, known as Vinnie Paul to all of us fans has died, as confirmed by his representatives early this morning.

Born in Texas, Vinnie credited his Lonestar roots for his hard-hitting drum grooves. He grew up with the sounds of ZZ Top and Stevie Ray Vaughan and cited Led Zeppelin, Black Sabbath, Kiss and Van Halen as his most inspirational bands.

Vinnie and his brother, the late, great Dimebag Darrell, formed Pantera back in 1981. With most bands that have siblings in them there is rivalry, but that was certainly not the case in this group. The brothers Abbott were united in Metal. Pantera earned four Grammy nominations and charted nine albums on the billboard charts with ‘Far Beyond Driven’ hitting the number one spot.

I started worked with the guys in 1992 when I joined MTV’s Headbangers Ball and it was a on trip to Kalamazoo that our friendship with the band was formed. As soon as my host, Vanessa Warwick, and I arrived, the brothers Abbott made sure we had a double in our hands all night long.

After the show, the band would turn their dressing room into a club called The Cosmopolitan (see photo above) and we would party into the wee hours. There was no rock star behaviour and they made everyone who’d ventured backstage welcome. After the club, we’d then head onto their tour bus and play poker.

The dudes had just launched their own hot scorching sauce called El Scorcho which they liked to tear open and “shoot it straight”. The next morning I woke up in my hotel bedroom, hungover to hell with a bottle of beer in one hand and a sachet of El Scorcho in the other.

This summed up the band, a hard working, hard playing tour-de-force which gave Heavy Metal a kick up it’s bad ass.

From then on we tried to get to any show possible – these guys represented the working class, the forgotten and they really were the people’s rock stars.

I was lucky enough to go to parties at both their mansions – The Fortress, which was Dime’s place with Rita and The Playhouse, which was Vinnie’s gaff. The parties they had were crazy and their signature drink, Black Tooths, were flowing.

Vinnie’s house really stood out. He had over 27 television screens over his living room wall, a 20 foot Christmas tree which was permanently erected in honour of his sadly departed mom, a swimming pool in the shape of a bottle of bourbon and a set of guest chalets that were based on the motel in Psycho. He even had a bookcase with a secret door into his inner sanctum. His dear friend, Kelly, the Queen of Shots, always looked after us and we rarely left before dawn.

After the sad demise of Pantera, the brothers formed Damageplan and it was with this band that Vinnie witnessed his brother being murdered live on stage in 2004. This was a huge loss to both him and all fans.

Vinnie Paul become part of a Heavy Metal supergroup, Hellyeah, and from then on he was adopted by all the other Metal bands as their ‘bro’. It still felt odd not seeing him with Dime though and there was this sense of vulnerability and loneliness. He often spent nights at his lapdancing club, The Clubhouse, in Dallas and we spent many a night there. He would ply us with Grey Goose and he was the absolute King of his Club with his eternal entourage of fellow rock stars, hot chicks and fans alike.

The last time I saw him was in Vegas, as always with a big smile on his face, a Black Tooth in hand and of course an entourage. I’m glad we had that hug and raised a glass to Dimebag.

RIP Vinnie Paul, Getcha Pull and thanks for the hangovers and all those hard hitting drum beats.