My first memories of the Music Machine are getting there before anyone else, along with the rest of the crew, and surveying the place. It was enormous compared to some of the other venue’s we’d played at. The stage was about seven feet above floor level but luckily the load in door was almost next to the stage, so that made life easy to get the equipment in. Not so easy to get the equipment out again, because while the place was in full swing that same door remained shut until the whole gig had finished around 2a.m.

A lot of that was to do with the noise from the venue spilling on to the streets at what the locals might see as inconsiderate hour in the morning but to the rest of us quite normal. We didn’t live the normal 9 to 5 lifestyle. We were living on the edge.

The edge of what, you might ask? Stardom maybe? Back then, who knew?

There was also the health and safety aspect, but we didn’t care so much about that in those days. I don’t think anybody did. If something went wrong, it was looked into and dealt with. Nowadays, if something goes wrong, so many people become involved. This department, and that department, bickering about something that could so easily be cleared up with a tissue. It really get’s on my tits, but let’s not digress.

The stage was a decent enough size to accommodate the three bands on the bill, which were in order of headline, Samson, Iron Maiden and Angelwitch. And then of course there was Neal Kay, who along with a local promoter, had set the whole thing up.

Looking at the stage from front of house, (the punters area, if you like) Neal had his DJ box to the left. He also had his own crew, which I found amusing. Neal never touched a thing. I don’t think he even touched his records. I’m sure he had someone to do that too. I could be wrong.

Back to the load in…

We were met by three guys who turned out to be the local crew, there to help us  get our gear in and out again. They were generally known as humpers. The leader, or for a better term, crew boss was a biker called Crazy Ken (who I remember as being an absolute nutter). But I have to admit, he and his two mates didn’t mess about when it came to getting the gear out of our van and loaded into the venue.

After my Maiden venture I became a stage hand with a London based company called Stage Miracles but I never came across these guys again. It gets you wondering where they all disappear to?

Getting there so early was our fault, and we had hours to kill. So we whiled away the time talking shit and finding more and more stupid things to do.

Ken had a used tampon in his pocket that he would suck on, and he would offer it to everyone. Bizarre, but true.

I found out that if I leaned far enough back on a particular chair, it would eventually fall over, and I would slam into the floor, much to the delight of our new biker friends.

It was all getting a bit stupid, until other people showed up, then the bikers went off to sort them out and we had to start getting our show set up.

The changing rooms were an insult to all of us really. Backstage at the Music Machine were not rooms exactly but cubicles. They were unguarded and we had to have someone looking after the bands personal effects during the show. It wasn’t a case of distrust, or maybe it was, thinking back. We didn’t know anybody else on the bill, so we were just being careful. We were from East London, Angelwitch were from South London, and Samson could have come from anywhere, because they were a bit strange. But I’ll come back to them in a bit.

I’m not sure if there was a problem with the sewerage system at the MM, but the lower you went, the wetter the floors were. The band decided to get changed for the show about 15 feet away from the stage access and even to this day I have no idea who looked after their personal belongings but it was kept safe.

Angelwitch opened the gig and played what I remember as being a powerful, Sabbathesque set. Lots of real heavy basslines complimented by twin guitars, and a really competent drummer.

They played for about half an hour, maybe more. That long ago it’s difficult to gauge time, but Angelwitch didn’t let anyone down.

Then it was our turn. Most of our stuff was already on stage, all we had to do was wait for Angelwitch to clear their equipment away and move our gear into  position.

The band played a really good set that night, finishing with Iron Maiden and Lightsy setting the mask off to the delight of the crowd.

Having done so many local gigs in such a short time, the Maiden fans there that night astonished me. I couldn’t put a figure on it, but I would say without hesitation that most of the people that turned up, were there to see Iron Maiden. I think that proved itself, when a few weeks later we headlined the same venue.

But my tale of the first night at the Music Machine isn’t quite finished.

While me and Pete packed our equipment away and put it all to one side of the building, Samson started to play their set.

It didn’t take long to realise that although this was not the best rock music I have ever heard, the singer was something different.

Bruce Dickinson, a young man with big idea’s, was the highlight of Samson’s set. We watched him climb all over the PA, jump off and do barrel rolls. He was the most electric front man we’d ever seen.

The rest of the band noticed too.

I stood next to Steve Harris, who had Dave Murray to his right, and the two of them chatted away between themselves all the way through the Samson set, about what, I have no idea, although in hind sight, I guess we can all assume what? Maybe!!!

When the show eventually finished at 2 am and we were finally allowed to get our equipment out of the building. Vic brought the Green Goddess round to the load-out doors and we loaded up our stuff onto the back of the van and headed home.

Everything had gone really well. We had just played to our biggest audience yet, and we knew that things were about to get better.

Or not, as the way things go.

We were almost home when the Green Goddess decided to give up. After various checks were made, it was decided that we would have to make our own way home.

I was quite happy to walk home but some people got cabs. At 3 in the morning, I didn’t really care. I started to walk, after all, it was only the Canning Town Flyover and I’d done this walk numerous times after watching RDB playing the Bridgehouse, with one Dennis Stratton.

What freaked me out most within the first few steps, was to see a rat, about the size of a medium sized dog. James Herbert (The Rats), you bastard. If you are not familiar with the books, then I suggest you give them a go.

Luckily, the rest of the journey home was uneventful.

FROM THE ABYSS: GOLDEN CORE RETURN WITH THE STUNNING 'FIMBULTÝR' 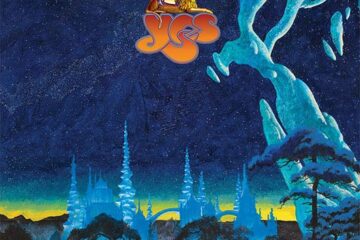