Secret Rule released their second album ‘Machination’ through Scarlet Records in June 2016 and continuing on from where their debut left off it once again features the powerful vocals of Angela Di Vincenzo.

Joining Angela and the regular members of the band this time are a selection of guests stars including Stefan Helleblad (Within Temptation), Timo Somers (Delain), Fabio D’Amore (Serenity) and Henrik Klingenberg (Sonata Arctica). The album has been produced by Tue Madsen, best known for his work with The Haunted, Moonspell and Dark Tranquility.

Here is the first video from the album, ‘The Saviour’.

Formed in 2014 Secret Rule released their debut album ‘Transposed Emotions’ the next year and have built up a solid fan base with a busy touring schedule.

The strong, melodic vocals of the charismatic Ms Di Vincenzo are very much a focal point of Secret Rule’s sound and they have happily been accepted by the female fronted metal scene but their sound is far from the standard symphonic or power metal you might expect when you hear it. Describing themselves as melodic metal ‘Machination’ is full of catchy, memorable metal tunes with a smorgasbord of influences.

‘The Saviour’ is definitely metal but with a touch of No Doubt like pop sensibility added in. However they can lean totally the other way too such as adding some meaty riffing and growling male vocals to the steady, brooding atmosphere of ‘Foolish Daisy’.

The album is full of such little eccentricities, livening up the band’s basic penchant for doing memorable melodic metal tunes with nice hooklines and excellent vocals and guitar work and helping to stop things becoming predictable as the album progresses.

‘A Mother’ sounds like it is a traditional power ballad and a pretty good one too but the little acoustic guitar section just comes out of nowhere, beautifully brought to the fore by Tue Madsen’s excellent production.

Overall this is a strong album, of interest to anyone with an interest in melodic metal with a bit of added imagination.

Secret Rule are coming to the UK on their summer European tour and can be seen at these venues:

Rock Dance Theatre to appear at the Warsaw Fantasy Fair 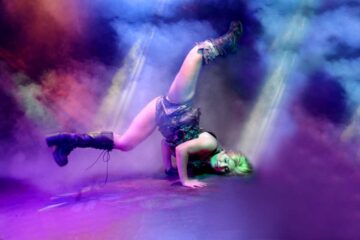