British Metal warriors Absolva have just unleased a brand new song entitled ‘Harsh Reality’ which is available for streaming and free download now. This is the first new music from Absolva since they released their incredibly well-received third studio album ‘Never A Good Day To Die’ on 12th October 2015. 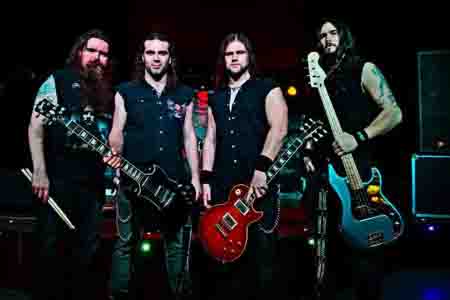 The band have also announced a new set of European tour dates for August, September and October which you can peruse in full below.

As with all Absolva albums so far, ‘Harsh Reality’ was recorded at Axis Studios in Doncaster, England with producer Matt Elliss, and is one of Absolva’s heavier tracks.

‘Harsh Reality’ showcases an amazing groove laid down by the rhythm section of Martin McNee (drums) and Karl Schramm (bass) together with the highly impressive trademark guitar work and distinctive vocals of Chris Appleton and Luke Appleton, a permanent member of Iced Earth for the past four years. The stunning digital artwork is from Cadiesart. Have a listen to the track right here…

Absolva burst onto the scene in 2012 when Fury UK disbanded after Luke was recruited by Jon Schaffer for the Iced Earth position and whilst Luke was away playing worldwide headline tours, Absolva brought out three solid albums and a live full-length in just three short years.

The band have been inactive during 2016 as they undertook a massive European tour with former Iron Maiden singer Blaze Bayley. Chris, together with Martin and Karl were Blaze’s touring band for the dates across the continent promoting Blaze’s latest album, ‘Infinite Entanglement’. We were at the Camden Underworld gig and you can read all about what was a very special night right here.

The work with Blaze Bayley continues but meanwhile Absolva have found time to turn attention to their own mission. Chris told us: “These next shows could be the last chance to see much of Absolva for many months and perhaps even the next year or two.

“We toured our last album before going into the studio with Blaze and since then have played around 70 shows with Blaze and that rate of work is not likely to stop. At the same time it seems Luke’s schedule with Iced Earth will kickstart again.

“So, as we’re unable to make an Absolva album this year we wanted to put this new song out for our fans and we’re absolutely stoked about these shows which we’ll hit with maximum Absolva force before we again go into the studio with Blaze to record the second album in his trilogy.”

And if you’re unaware of what Chris means by Blaze’s “trilogy”, he explains it all right here in our exclusive video interview.

If you haven’t discovered Absolva yet, here’s a small selection of some of their great tracks to get your teeth into. Turn them up!!