Vocalist Joe Lynn Turner, aside from his work with Ritchie Blackmore in Rainbow and Deep Purple and as frontman for Yngwie Malmsteen, is also well known for the amount of artists he’s work with. Have mic will travel, with a deal of infamy. A powerful voice that works perfectly and equally with pop, commercial hard rock and Heavy Metal.

He has also had a notable solo career with work alongside Carmine Appice and with the Hughes Turner Projected with former Trapeze and Deep Purple bassist/vocalist Glenn Hughes.

His vocals as well as song-writing were instrumental in augmenting guitarist Blackmore’s more commercial direction in Rainbow, with hits that included ‘I Surrender’, ‘Stone Cold’ and ‘Street Of Dreams’.

After Ritchie Blackmore brought Rainbow to an end to take part in the Deep Purple reformation, Turner undertook a solo career and recorded the well-received album ‘Rescue You’ which was released through Elektra in 1985 and this live album was recorded on the subsequent tour.

Joe first came to prominence in the Southern Rock influenced pop rock band Fandango, with whom he recorded vocals and guitar on four albums between 1977 and 1980. It was then that he was noticed by Rainbow. As keyboard player Don Airey told me: “We were driving through New Jersey, me and Cozy, we heard a band called Fandango on the radio, local band, ‘Who’s That!!?’, so we checked them out, and their singer was Joe Linquito, before he changed his name.

“And it was in the back of our heads that Graham [Bonnett] wasn’t going to last, sooner or later. And he had a health issue, Graham, well he had a couple of health issues, we knew we’d have to look for someone at some stage and Joe was the obvious choice, a very good singer.”

With Rainbow, Joe recorded three albums, with an ever rotating line-up; ‘Difficult To Cure’, ‘Straight Between The Eyes’ and ‘Bent Out Of Shape’. Hit singles included ‘I Surrender’, ‘Can’t Happen Here’, ‘Stone Cold’, ‘Street Of Dreams’ and ‘Can’t Let You Go’. Two live shows were also officially recorded, one in 1982 in San Antonio, Texas (‘Live Between The Eyes’) and their final concert in Japan in 1984. 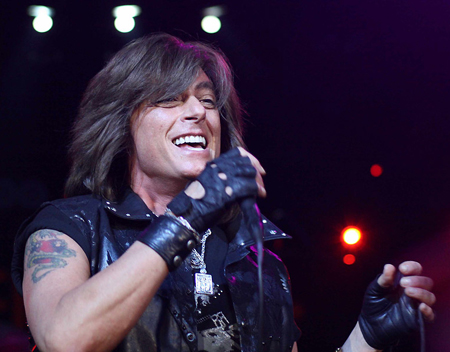 Signing to Elektra, Joe recorded ‘Rescue You’, featuring keyboard player and founder member of Foreigner Alan Greenwood, former Rainbow drummer drummer Chuck Burgi who went on to play with Blue Oyster Cult, Meat Loaf and Billy Joel plus guitarist/bassist Bobby Messano from Starz. The album ‘Rescue You’ was a solid if radio friendly AOR affair mixing power pop with some blistering hard rock. Typical mid 80s you could argue and it went down well with a video recorded for ‘Endlessly’. Most of the tracks were co-written by Turner and Greenwood.

The subsequent tour added bassist Barry Dunaway who would later work alongside JLT in Yngwie Malmsteen’s band. The band intro gets a cheer and the set kicks off with the new ‘I Found Love’, an uptempo number with quite a guitar solo. Strong AOR vocals with a good range showcase JLT well. ‘Losing You’, the opening track of the studio album is next up, a programmed intro and the melody and general feel strongly reminiscent of Rainbow’s ‘Bent Out Of Shape’ while ‘Soul Searcher’ is a more balladic number with some intricate touches.

‘Young Hearts’ is more typical of the pop/rock that JLT would do sessions for. A good track but not the most outstanding number; ‘Endlessly’ is much stronger as it’s as solid as it is commercial. There’s a strong rhythm and the power is turned up for ‘Rescue You’.

The first Rainbow track is ‘Stone Cold’, which goes down a storm; it was a bigger hit in the USA than it was here. The extended keyboard led intro builds well and the following ‘Street Of Dreams’ (in my view a much stronger track) is played faithfully too, keeping the then final Rainbow album alive.

The guitar solo is technically excellent but feels out of place and unnecessary, but it does build into the next track well.

There’s some wonderful music here and of the thirteen tracks there are just two Rainbow numbers and a couple of tracks not on that album, including the cover of Buddy Miles’ ‘Them Changes’, an inspired choice and one of the bluesier and heavier tracks you’ll ever hear JLT front. Heavily reliant on the ‘Rescue You’ album it comes over much heavier and quite blistering in places.

Joe Lynn Turner has gone on to some much bigger things in a range of styles and was recently seen fronting Rated X, featuring Carmine Appice and Tony Franklin.

Despite the editing (notably of JLT’s inter-song talking), it’s an excellent record of the era and the sleeve notes feature quotes from JLT himself.