After a monumental Saturday at Download, another monumental downpour set the scene for Black Sabbath’s final ever Donington headline appearance. The rain eased off around fifteen minutes before the pioneers of Heavy Metal were due to hit the stage and it had done absolutely nothing to dampen spirits here up to now. 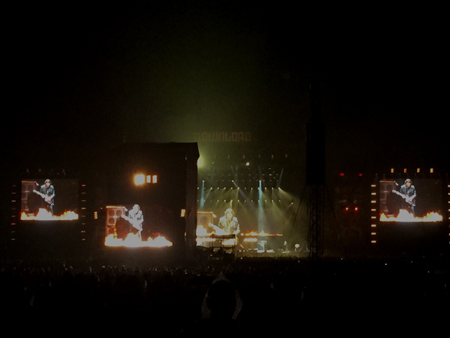 To say the anticipation was huge is a massive understatement. The slightest movement on stage, for example the testing of the lights, got a mighty roar and at the very front of the stage, there was an enormous party atmosphere.

Fifteen minutes before showtime and the anticipation starts to build…

And then suddenly Ozzy’s voice boomed out from backstage, speaking those immortal words: “Let me fucking hear you!” and it ushered in a deafening roar which arose from the gathered masses.

And then we are off with the intro film, the chimes, flames either side of the drum kit and no matter how many times you see this piece of Heavy Metal theatre, it’s still enthralling and thrilling.

“Let me fucking hear you…!”

This was on the outskirts of the Lemmy Stage area. It got much worst the more towards the centre you ventured…

Red and purple pyschedelic colours cover the giant screens and then Sabbath are off to a blinding start with opener ‘Black Sabbath’. The crowd are putty in Ozzy’s hands and Tony Iommi’s solo on second song ‘Fairies Wear Boots’ has everyone dancing and jumping along and the noise from the crowd is immense, as is the sight of thousands of horns in the air.

Ozzy has the whole of Download cheering “on three” during ‘Into The Void’ which sounds absolutely brutal with Geezer’s bass as punchy as hell. 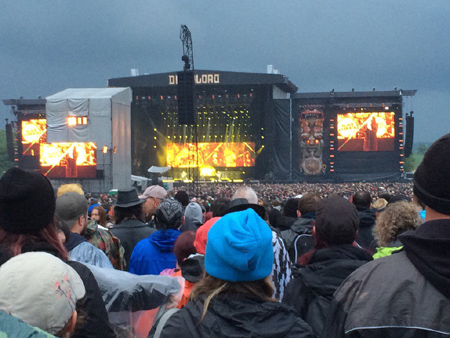 Hand of God strikes the hour…

The crowd goes all the way back to the arena entrance but the sound is slightly muddy close up, no pun intended, and very poor at the back of the festival site but Sabbath are a mighty draw and have already captivated Download. Ozzy is on top form here, as are the whole band and this is a joy to behold.

NOFX were playing on the Encore Stage for the first half of Sabbath’s set but not to many people, unsurprisingly.

“I can’t fucking hear you!” shouted Ozzy just before he introduced the band who then burst into a totally dynamic version of ‘War Pigs’, complete with WWII-esque spotlights, which are appropriate as it is now like a war zone at the front of the stage.

And then down in falls comes the rain… halfway through ‘War Pigs’ and rainclouds are gathered in their masses as the light starts to fade and people start to bail as the conditions are now becoming unbearable.

One man is hiding under a burger van’s canopy, only half-able to see Black Sabbath while another comments: “Black Sabbath are providing the soundtrack to a mass drowning.”

Sabbath tear into ‘Hand Of Doom’ with Ozzy displaying his massive character and personality while Tommy Clufetos remains a wonder on the drums. Tony Iommi looks immensely strong and energetic and Geezer’s fingers are absolutely flying all over his bass. Are they really going to retire in February?

Tommy plays a lengthy seven minute drum solo which is prefaced by film of early live Sabbath and people remark on how the band members haven’t changed as much as you may expect. But yes, they really are retiring after the Birmingham show on February 4th. Allegedly.

And then it’s a steely version of ‘Iron Man’, a rousing ‘Dirty Women’ of which there are plenty here given the ankle deep mud all over the site and at 10:29pm Ozzy says to the crowd: “Thank you for such a great journey, without your loyalty we wouldn’t be here now…” before Tony Iommi pumps out one of the greatest riffs of all time as ‘Children Of The Grave’ cuts through the rain and mesmerises the crowd.

Sabbath leave the stage and the crowd go quiet but they don’t have to wait long before they return and Ozzy shouts: “Let me hear you shout one last song…” and we’re into ‘Paranoid’ with Ozzy’s voice on it’s last legs now. It’s a mighty effort from the Ozzman as he struggles to belt out those famous words. He only just manages it and at 10.38 it’s all over and a huge firework display erupts over Donington Park.

It all started with a clap of thunder and a rainstorm on that unforgettable first album in 1970 and their last ever UK headline festival appearance ended in the pouring rain. History was made here at Castle Donington tonight. It was incredible and Black Sabbath will be sorely missed.

Black Sabbath’s last ever gig will be at Birmingham’s Genting Arena on Saturday 4th February 2017. Tickets will go on pre-sale on Wednesday 15th June 2016 at 9.00am and will be on general sale on Friday 17th June 2016. 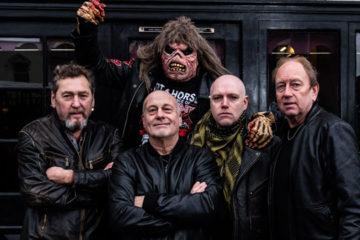