Legendary guitarist Eric Clapton, who first rose to fame in the 1960s with The Yardbirds, John Mayall & The Bluesbreakers, Cream and Blind Faith before launching a successful solo career in the 1970s, has revealed he is suffering incurable damage to his nervous system which has left him struggling to play his guitar. 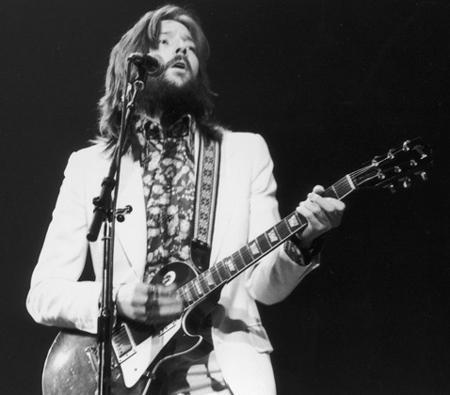 The guitar great, who has publicly fought addictions to cocaine, heroin, prescription drugs and alcohol, said that although he is grateful to be alive, he has been debilitated by his illness.

He said: “I’ve had quite a lot of pain over the last year. It started with lower back pain and turned into what they call peripheral neuropathy – which is where you feel like you have electric shocks going down your leg. And I’ve had to figure out how to deal with some other things from getting old.”

Now aged 71, Eric also added that it is now “hard work” to play the guitar and he has had to “come to terms” with the fact that his condition will not improve.

“Because I’m in recovery from alcoholism and addiction to substances, I consider it a great thing to be alive at all. By rights I should have kicked the bucket a long time ago. For some reason I was plucked from the jaws of hell and given another chance.

“I can still play. I mean, it’s hard work sometimes, the physical side of it – just getting old, man, is hard.”

While his career boomed in the 1970s, Eric’s personal life descended into addiction and a string of doomed affairs, including with Beatles guitarist George Harrison’s wife, model Pattie Boyd who was the inspiration for the songs ‘Layla’ and ‘Wonderful Tonight’.

One story from that era goes that one evening of a concert Eric asked his manager: “How did I play tonight?” The manager answered: “Eric, you haven’t played yet.”

He converted to Christianity but his heroin addiction became so severe that he was forced to temporarily give up performing after famously passing out while performing at a charity concert in Madison Square Garden, New York in 1971.

Eric, the only three time inductee into the Rock And Roll Hall Of Fame, told Classic Rock magazine: “I don’t know how I survived – the 70s especially. There was one point there where they were flying me to hospital in St Paul, Minnesota and I was dying, apparently, I had three ulcers and one of them was bleeding.

“I was drinking three bottles of brandy and taking handfuls of codeine, and I was close to checking out. It’s amazing that I’m still here, really.”

He married Pattie Boyd in 1979 and gave up heroin but then began his battle with alcoholism.

He said: “I kind of regret losing an awful lot of time to just being a vegetable – pickled.”

In 1985 he had a love child with Yvonne Kelly, a manager at Associated Independent Recording, but it was not until his affair with Italian model Lory Del Santo was revealed that Pattie Boyd divorced him.

He married former fashion sales executive Melia McEnery, 31 years his junior, in 2002 and the couple have three daughters and a grandson together.

He said: “My life is really blessed. I’ve got a wonderful family, a fantastically beautiful wife, in every way, great kids, and I can still play.

“I love to play, still. I sit in the corner of our front room with a guitar and I play in the morning and I rest in the afternoon… life is good.”

Eric has just released his 23rd album, ‘I Still Do’, and pointed out that the record is far from a farewell to his career but rather a tribute to friends, family and other musicians who have passed away in recent years.