The Book Of Souls World Tour came to an end last night as a global viewing audience of twenty-seven million Iron Maiden fans joined the 85,000 in attendance at Wacken to witness an absolutely stunning performance.

After seventy-one gigs across six continents and thirty-five countries, Maiden put on their best performance of the lot in the best place they could possibly have finished the most ambitious tour ever undertaken.

The band truly excelled themselves last night, producing a show that was high on adrenalin and emotion. It was a statement that Iron Maiden are still the best Heavy Metal band in the world and will remain so for many years yet.

We were privileged to be amongst the twenty-seven million thanks to the global stream from arte.de and the man who mixed the live broadcast, Iron Maiden’s Recording Engineer Tony Newton, spoke to us from Wacken after the show was completed.

“It was a very stressful day, but very exciting and rewarding too, especially seeing the feedback from people after the show. You asked how I deal with pre-match nerves? Well I mixed The Raven Age live on the Headbanger’s Stage which took my mind off it for a couple of hours then I just wandered around the festival soaking up the atmosphere.”

Tony’s office for the evening

And on the mood in the Maiden camp just before the very final gig of a truly epic tour, Tony told us: “I sensed the band were excited and a bit nervous. It was great though to end on a high, for the band and crew. I was at the site from 8.00am setting up the desk. After the show I was so relieved everything went well that I had a glass of wine while I said my farewells to my friends in the crew.

“There were many highlights on this tour. Playing in China for the first time, Bruce’s first time in South Africa, but personally for me it was mixing the live broadcasts for Download (Sky Arts) and Wacken (arte).

“It’s the mix of emotions. Worrying about getting all the feeds and hoping the mix is ball park from the start. Juggling the first song, tweaking and then enjoying it and not wanting the show to finish. Not wanting the tour to finish? Well to be honest, six months is enough. Everyone needs a break so they come back fresh next year.”

Bruce, “Born in 58, 58 on Sunday” as he announced from the stage, revealed at Download in June that Maiden will be undertaking a full UK tour in 2017 and it’s going to be nothing short of spectacular. So it shall be written, so it shall be done. 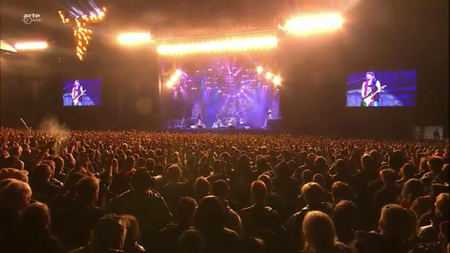 Setlist:
Intro: Doctor Doctor (UFO song)
If Eternity Should Fail
Speed Of Light
Children Of The Damned
Tears Of A Clown
The Red And The Black
The Trooper
Powerslave
Death Or Glory
The Book Of Souls
Hallowed Be Thy Name
Fear Of The Dark
Iron Maiden

Encore:
The Number Of The Beast
Blood Brothers
Wasted Years

Outro: Always Look On The Bright Side Of Life (Monty Python song)

*The 27,000,000 viewing figure is a conservative estimate based on global bandwidth useage of the arte.de and wacken.com servers.

Thanks to Andi Wiyono for the photos.

Previous article
No Sleep ‘Til Hamburg: Motörhead’s Bomber Makes Its Final Flight At Wacken
Next article
Mark Boals / Smoking with Snoop Dogg, Recording with Vinnie and the new Collection