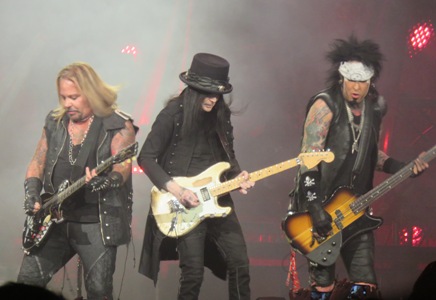 All bad things must come to an end…I’ve been lucky enough to catch several dates on this tour from the early outdoor arena shows in San Francisco, to Donington this year and the recent gig at Wemberlee.

It’s fair to say they’ve extended the brand, extended the idea and now got a full Rammstein-style pyro and fairground drum runway to finish off in style.

So, having been a Crüe fan for many years I decided to splash out on a holiday to Vegas and LA to see the final shows. I hear what you’re saying: they’ll be back, who will actually sue them if they break this contract, and some of the band have even said they’ll probably still keep playing one off gigs and festivals anyhow…

Sooooo, enjoy it for what it is, an excuse “for one last time” to scream along to our glamtastic floor fillers and stripper themes!

Interestingly and surprisingly in the days before the Vegas show there was still plenty of advertising for tickets – even flyers on windscreens at a Kiss tribute the night before! But on the night the MGM Grand Garden Arena looked full to bursting with Sin City glamsters.

I was saddened that Mr Cooper wasn’t supporting at these last few dates. Wasn’t he supposed to execute the Mötley’s at the final show? There is a story someone’s not telling! Well, instead we have The Struts (a UK indie band who’ve recently relocated to LA) who can’t do the Alice-sized gap any sort of justice, despite attempted singalongs and the singer’s flamboyant Freddie-style cape. Bored, I resort to the Internet, only to find that one of the wifi connections for the arena that night is named Alice Cooper. Oops!

The seats we had for the Vegas show were amazing, virtually underneath Tommy’s Crüeciflyer track, with Vince and Nikki swinging overhead on the extended cranes at the end and also pretty close to the second stage for the encore. However, for a fraction of the price of these tickets we had standing tickets at Wembley and could get to all these coveted positions and more.

The Vegas show was great, but not too dissimilar to the London show, apart from Vincey perhaps putting a little more effort into singing, what with Vegas being his current home town.

On to LA, with the backdrop of the sad news of Lemmy’s recent passing. The Staples Centre in Downtown LA is an awesome modern complex with excellent facilities, and not too over-priced for food, beers and cocktails. The home of the local basketball and ice hockey teams, the merchandise store had become a pop up store for the final chance to get hold of Crüe sports style shirts and the obligatory final show tshirts, kerching!! 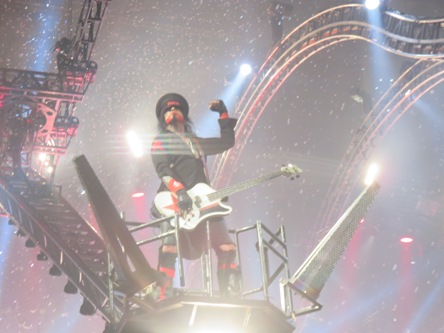 Vince may have lost the plot with business deals on Tequila, dodgy strip joints, bars and football teams in Vegas but the Crüe boys have not missed a trick tonight, even down to the event-themed plastic beer cups. All of this merch and cocktail activity meant we missed The Struts in support – shame (not).

The show itself: Well, yes…it was the same set as London and Vegas and every other show, but it was the last one. Emotion was palpable, you could cut the air with it.

I was sat next to a housewife from Canada who’d dragged her Bieber-loving daughter along. This show, as for me, was her 5th of the tour. Suffice to say, we were both equally in bits by the end – that’s the impact of this legendary band. When Vince broke down early on in the show when thanking the Crüe Roadcrue, with tears streaming down his face, there was barely a dry eye in the house. 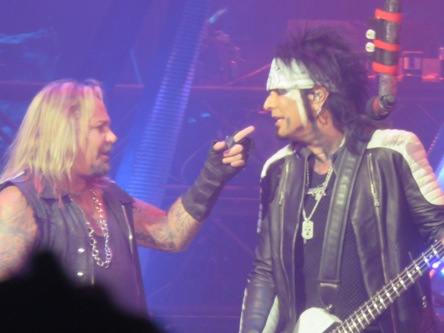 It was the Rammstein pyro again (which we had a great side stage view of from our seats), and the same bits that made us Brits wince – the Gary Glitter ‘Rock n Roll’ intro/outro to “Smokin’ in the Boys Room” and Nikki’s inappropriate knife story (Is Nikki the new Ted Nugent?!). Tommy’s Crüeciflyer was one of the highlights again, but this caused the most hilarity too, by breaking down at the far end (typical Motley Crüe bad luck!).

Resourceful as ever Tommy used the time being stuck upside down on the ceiling to revive his old patter, asking the audience to show some titties! He was rescued of course – it was quite a sight seeing the roadies scamper up the track to help him down and then return the drums back to the stage while the human skeleton Mick Mars treated us to one last extended solo.

4 minutes after midnight we finally got the New Year countdown…but that’s typical Crüe management – I have a Crüe tshirt where Donington is spelt Doningtan!! However, this is da Crüe, and the accompanying confetti/balloon/streamer storm which reached every nook and cranny of the arena put Kiss to shame. And the final assault of pyro left me with a winter suntan – a very suitable end. 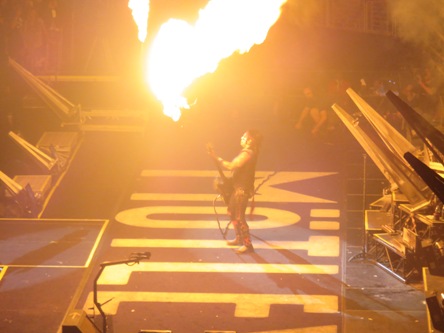 By the time we reached the end of ‘Kickstart My Heart’ it was an emotional roller coaster that had taken its toll, as the band relocated to the mini stage for ‘Home Sweet Home’. Most of the crowd were in tears again. Vince could hardly sing as he was so choked up. The wobble in his voice provided a vibrato that ripped through us like a knife. And too soon it was all over…the Saints of Los Angeles left the building for the last time, surely canonized.

There were rumours flying around that Eddie Van Halen was going to turn up to the show and that Ozzy was going to guest too (sans snorted ants presumably), but in the end it was the same Ol Situation as the rest of the tour, albeit with added emotion and pyro. 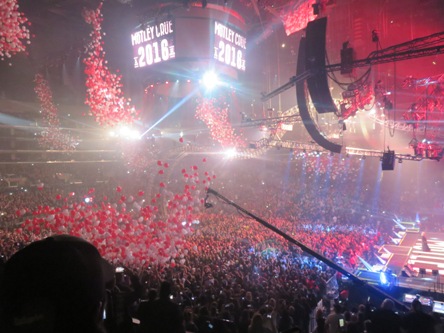 Lemmy dying at 70 and providing the rock and roll blueprint, still touring until recently perhaps gives the lie to this final show. Perhaps we’ll see them back, who knows, but it certainly doesn’t feel like it. They sure were ‘Kicking ass’ tonight…and they must have made a bob or two too.

A sad end to 2015 though, where in the matter of days two of rock’s greatest bands come to an end, coincidentally both beginning with Mot.. Long live Motörhead and Mötley Crüe!

Mikkey Dee: "Motorhead Is Over"