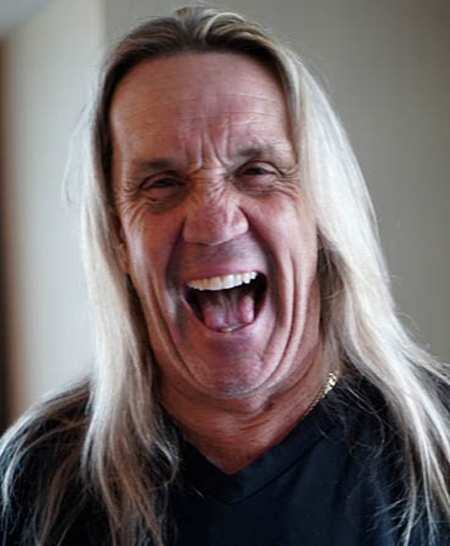 Iron Maiden drummer Nick McBrain gave an extensive interview with The Drummer’s Journal recently when the band were in Los Angeles as part of their Book Of Souls world tour and in a very revealing conversation recalled the time that he was fired from the Pat Travers Band, as well as the incident that left him with his familiar flat nose.

When asked by TDJ if he had ever played the Royal Albert Hall, Nicko replied: “No, I haven’t! Bruce has though, the bastard! [grins]. But I think I was pretty naïve when I was younger. When I first started out, I asked Sonor for a free drum kit. I called them up and said, ‘I’m playing with this phenomenal guitar player called Pat Travers, can I have a kit?’ Their response was brilliant: ‘Do Rolls Royce give away their cars?’ So after that, I bought one.

Nicko: “No, not a bloody Rolls Royce – a Sonor drum kit. Anyway, I ended up getting fired from that gig with Pat. I remember this very clearly. A guy called David Hemmings was the manager. I got a phone call from David and he told me, ‘Sorry Nicko, but we’ve got to part company.’ I immediately thought, ‘oh, Dave’s leaving, how sad’, so I replied, ‘sorry to see you go, mate.’

“There’s silence for a few seconds, then I hear, ‘no Nick, you’re the one who is leaving.’ Christ, I was so naïve I didn’t even realise I was getting fired.

“That was actually a pretty bad period of my life. They kept my bloody drum kit too. I went back to the management and said, ‘this is disgraceful, you can’t just keep my drum kit, I need it. You’ll have to buy me another!’ Thankfully, they did.”

And about the fight that broke his nose, have a listen to this video clip:

Nicko, who is a dedicated Christian, also revealed that he knew his drinking was getting bad when he saw footage of an interview he did when he was inebriated. “I’d probably been drinking for about four days straight,” he said. “My eyes were red and bloodshot, I was slurring words and not making any sense. I don’t remember doing the interview at all. I realized that is not a good situation to be in. So I haven’t had a drink in a while now. I’m not saying I’ll never have another but something had to change.

“I was at dinner last night with some friends and everyone was getting a bit drunk,” he recalled. “I love red wine and this bottle went right past me, and I immediately thought, ‘Give me that bottle,’ but I let it go. It wasn’t a nice feeling. I know that all it would take is one drink.”

You can read the whole interview with The Drummer’s Journal right here.