Chris Dale: 1066 And How The Norman Invasion Of England Shaped Heavy Metal

The Bayeux tapestry showing the Battle of Hastings, 1066

There are many key dates in the history of Heavy Metal and most of them are fiercely debated. 1969 is when Black Sabbath recorded what was arguably the first Heavy Metal album. 1955 is when Chuck Berry is often credited as the first true rock n’ roll guitar hero and what is Metal without a guitar hero?

Both of these claims have been disputed backwards and forwards by Rock Historians and other more contentious claims put forward as to precedents to both these events but few can deny that 1066 is when Duke William of Normandy seized the throne of England from the German Anglo-Saxons for the French Normans at the Battle of Hastings.

Let’s listen to some Metal on the topic while we’re here. This is Thy Majestie playing ‘The King And The Warrior’ from their album ‘Hastings 1066’.

1066 is a key date in the history of the modern English language and therefore Heavy Metal lyrics, which are almost universally sung in English. OK, some bands like Rammstein sing in their own language but very few internationally selling Metal artists sing in a language other than English.

It’s not just Metal either – pop bands to rap bands and lots of people all over the world sing in English.

English is a hybrid language having two and sometimes three roots, with often two or three sets of vocabulary, whereas most European languages have a single main root language from which they have evolved.

To see how the English language ended up how it did we must cast ourselves back to before the dark ages and before the Roman Invasion to a time around the first century BC when the languages of the British Isles were Celtic and closely related. They were not mutually intelligible but they shared commonalities.

The people who spoke these languages were called the Britons. This is important. Remember this. The Celtic Britons were the people of the British Isles before the Roman Invasion. Their descendants are not the majority of the population of the modern United Kingdom but they were the original inhabitants.

Up in the North East of Scotland, Aberdeen is where the River Dee enters the sea. Aberdeen has a Welsh sounding name because similar Celtic languages were spoken widely across large parts of Britain long before the idea of an English language ever existed.

Then the Romans came and went, they left behind them rabbits, roads, a few words in modern Welsh and the basis of some future town names such as Londinium and Oxonium but little else linguistically from Latin made a lasting impact at that time.

In around 400AD the Roman Empire collapsed and their legions left the now relatively peaceful Romano-Britons to defend themselves.

(*Note to any modern world leaders reading this article, if you withdraw a previously deployed army of occupation or show of military might without a firm exit strategy in place, you will create a power vacuum which may destabilise the region and leave the door open to extremist or other foreign powers to assume control. This is basics that we learned in the Roman era, guys!)

Anyway, the vulnerable Britons were soon prey to foreigners invading from the continent. The partially legendary King Arthur was one of those Celtic Britons to stand up against the dastardly invaders. 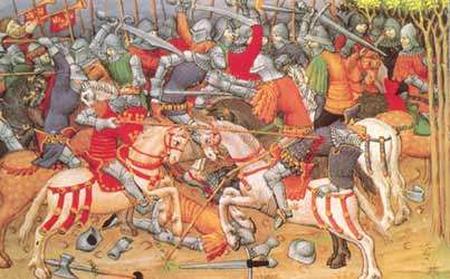 These invaders that King Arthur and his brave Knights of the Round Table fought against were the Anglo-Saxons – yes, the English!

The Britons were ultimately defeated and this new round of invaders, the Anglo-Saxons from Germany and Holland, pushed the original Celtic Britons to the North and West, to Cumbria, Cornwall, Wales, Scotland and of course to their home base in Ireland.

This was the beginning of the Anglo-Saxon English language. It was the Germanic tongue of the invaders. This is why modern English has so many vocabulary and grammatical similarities to modern German (eg. a basic phrase such as ‘I go’ in English is ‘Ich gehe’ in German. Similarities can be seen).

This is also why modern Welsh and modern English have very few grammatical similarities, (eg. ‘I go’ in Welsh is ‘Dw i’n mynd’. No similarities can be seen). This is because English is an imported and not a native language to this island, like Welsh is.

The Anglo-Saxon invaders populated England and lived relatively peacefully for a few centuries, aside from the Scandinavian Vikings raiding and sometimes settling the coastlines, leaving behind them small fragments of their Norse words in the newly born English language.

Then came 1066 and everything changed again! Duke William of Normandy claimed the throne of England and with a largely French army launched the last successful invasion of England. William famously defeated the Anglo-Saxon King Harold at the Battle of Hastings and established the Norman dynasty to rule over England.

Initially, William’s Norman Barons spoke Norman French and the English peasants spoke Anglo-Saxon. Gradually the two tongues merged into a mutually intelligible language with a basis in Germanic Anglo-Saxon with additional vocabulary from our Norman French masters added on top, with a smattering of Viking Norse words still remaining.

Hence English is a language exceptionally rich in vocabulary, as we have both Germanic and French words for most needs. These additional words don’t always add extra meaning but they give English language lyricists such as William Shakespeare, Edward Lear and Geezer Butler a direct advantage over one writing in a language with a single root and therefore a more limited vocabulary.

Here’s a few examples of classic Metal lyrics that wouldn’t work if it weren’t for the hybrid of Germanic, French and Norse words that made up modern English from 1066 onwards. Let’s look at the first two lines of Iron Maiden’s ‘Run To The Hills’.

“White man came across the sea,
He brought us pain and misery.”

That’s a uniquely English rhyme. Our word ‘sea’ is from the old German word ‘See’ and ‘misery’ is from a Latin/French root, ‘miser’. If we used only Germanic words in English Steve Harris would have had to try rhyming ‘sea’ with ‘unluckiness’. If we used only Latin/French words we’d have to rhyme ‘misery’ with ‘mer’. That’d be nice alliteration but not a rhyme.

These are the first two lines of ‘Wheels Of Steel’ by Saxon (no pun intended).

“When my foots on the throttle there’s no looking back,
I leave the motor tickin’ over when she’s back on the track.”

The word ‘back’ is from the old Germanic word ‘Bakam’, which has died out in modern German but still survived in Anglo-Saxon English. ‘Track’ is from the French ‘la trace’ with a similar meaning. If these two languages had not interacted, Saxon may never have written one of the greatest moments in Metal! 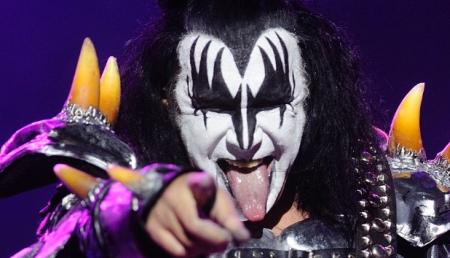 I’m not even searching for odd one-off occasions where this phenomenon occurs. I’m just thinking up the the first songs that come into my head. Here’s the opening two lines of ‘Rock And Roll All Nite’ by KISS.

“You show us everything you’ve got,
You keep on dancin’ and the room gets hot.”

‘Get/Got’ is from ancient Norse as ‘geta’, and ‘hot’ has German roots similar to the modern German word ‘heiss’. This rhyme is a direct result of Viking incursions into Anglo-Saxon England in the 10th Century AD.

“It was one of those nights when you turn out the lights and everything comes into view,
She was taking her time I was losing my mind there was nothing that she wouldn’t do.”

Again it’s the mixture of languages that provide the rhymes. ‘View’ is from the Norman French ‘voire’, to see. And ‘do’ is from an ancient West Germanic word ‘don’. Interestingly, the mid-line rhymes of ‘nights/lights’ and ‘time/mind’ all have ancient Indo-European roots and are common in form to words in both Latin and ancient Germanic languages.

“Generals gathered in their masses,
Just like witches at black masses.”

OK, that last one’s maybe a bad example. ‘Mass’ is from Norman French as in ‘en masse’, and rhyming words with themselves is technically not actually a rhyme, just pure laziness. But hey, it’s Sabbath and we love them, man!

You get the idea though. Writing lyrics in English is greatly assisted by the Norman (and to a lesser extent the Norse) influence on our Anglo-Saxon language. All Hail, William I, Conqueror of England! He gave us a spark with which our heroes could write Heavy Metal songs! 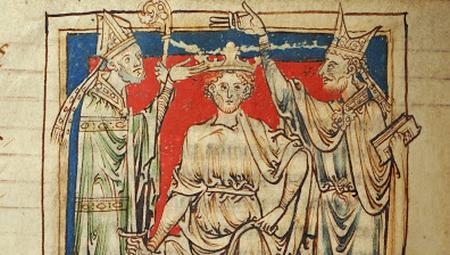 A further interesting point to make is that the use of a hybrid of imported languages implies that anyone commonly speaking such a tongue as a first language in the modern United Kingdom (myself included) is probably not historically descended from a native of these islands.

The true Englishman is far more likely to be descended from a mixture of German, French, Italian, Dutch and Scandinavian invaders than to be the purebred offspring of the original inhabitants of England. It is thus only with a heavy sense of irony that they might then comment on more recent immigration from Europe.

Please note that when I have given historical and linguistic examples here, they are all accurate but they are simplifications of the history and science of linguistics. If you want to read a more serious study of the modern English and Indo-European languages I would recommend the following books as good starters.

‘The Cambridge Encyclopaedia of Language’ published by Crystal
‘The Adventure of English’ by Melvyn Bragg published by Hodder & Stoughton General Division
‘Dictionary of Word Origins’ by John Ayto, published by Bloomsbury Reference

Or if you’ve not got the patience for big books, here’s a handy five minute explanation of the history of the English language from Ted-Ed.

Previous article
EXCLUSIVE: IRON MAIDEN POSSIBLY ABOUT TO ANNOUNCE TWELVE DATE UK TOUR FOR MARCH 2017
Next article
URIAH HEEP AND QUEENSRŸCHE GET EVERYONE SINGING IN THE RAIN IN THE NETHERLANDS