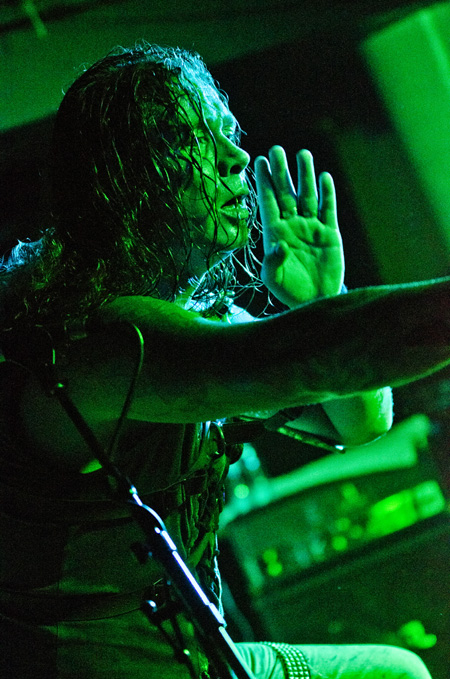 We’ve been looking forward to this one ever since it was announced back in May. We’ve championed both Finsterforst and Heidevolk ever since we first heard them and we were hoping that our consistent plugging of these two great bands who had barely been heard of in Britain would one day pay divdends and as they were miraculously on the same bill with Equilibrium, tonight was the night we would find out.

But before we get to the evening’s events, we had a good chat with Finsterforst and Heidevolk before they went on stage and here’s both interviews in full.

And so it came to pass that a sizeable and lively crowd gathered at The Underworld to witness what will go down as an historic night because both Finsterforst and Heidevolk rode off into the sunset at the end of their shows utterly triumphant and confident that they do genuinely have a fanbase in the UK and that they will be coming back for more dates sooner rather than later.

Finsterforst were first up and even without mainman Olli Berlin, any fears that this was going to be a quiet night were instantly banished. Stefan is an accomplished frontman in his own right and his confidence soared even higher when a circle pit broke out during second number ‘Zeit Für Hass’. Victory was within sight and imminent.

We couldn’t help but smile wryly as an English crowd headbanged and chanted along to a German National Football Team anthem, probably not knowing the meaning of the lyrics, as Finsterforst disproved the theory that only bands who sing in English stand a chance here.

The finest exponents of Black Forest Metal now had the crowd jumping and shouting along and it was a wonderful sight when ‘#YØLØ’ burst out and Stefan, resplendent in yellow sunglasses, conducted a willing audience who had by now doubled in number due to Finsterforst’s unique sound causing the bottle Gods to make an Abfahrt from the adjoining bars. That is something that you only see once in a lifetime in The Underworld. 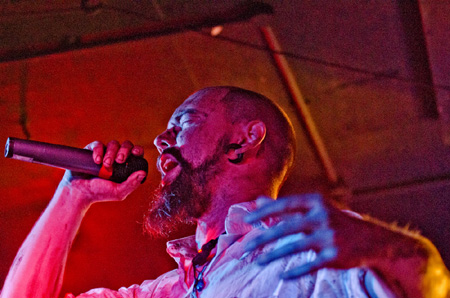 You can’t fake it in this game and the whole band didn’t even consider concealing their delight at having won over this partisan London Metal crowd. The eight-minute-plus delight of debut album title track ‘Mach Dich Frei’ finished off proceedings and it’s more than fair to say that everyone in the crowd wanted more.

A little part of the Schwarzer Wald was planted in England tonight and it will grow and grow. Finsterforst came, saw, conquered and they should be bloody well proud of themselves as they were absolutely magnificent. Catch them at Hard Rock Hell in March. 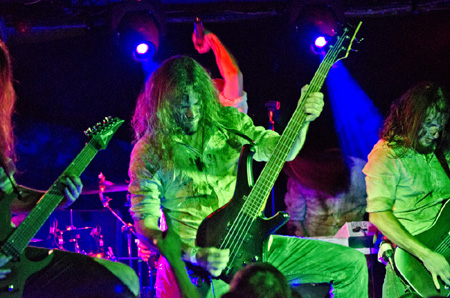 It was a fairly similar story for Heidevolk. As Lars said in the interview above, they had no idea what to expect and weren’t sure how well known they were here but they certainly know now. 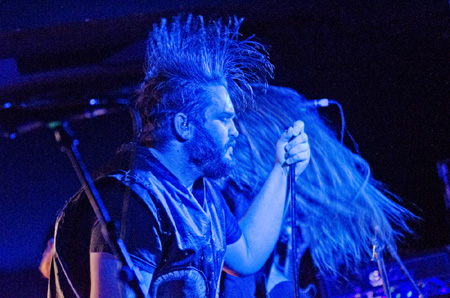 They were off to the best possible start with opener ‘Winter Woede’ and ‘Opstand Der Bataven’ and ‘De Toekomst Lonkt’ kept the tempo and the audience volume high before the majestic ‘Saksenland’ completely sealed the deal. This was the absolute highlight of the night for us, even above the song Heidevolk are best known for.

The crowd were chanting for ‘Vulgaris Magistralis’ as Rowan inrtoduced ‘Vinland’, their other anthem and the first song the band have ever sung in English. “Not yet,” said Lars and this was good news as ‘Vulgaris…’ would have meant the end of the set but Heidevolk had more time to show they are about much more than one great song. 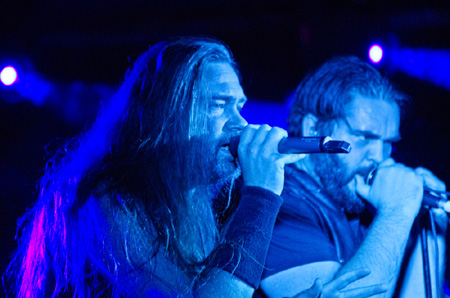 This superb setlist even omitted numbers such as ‘Dondergod’, ‘Wodan Heerst’ and ‘Furor Teutonicus’ and whether the audience were aware or not of what ‘Drankgelag’ is all about, they certainly took it to their hearts and enjoyed it immensely. The same can be said for ‘Herboren In Vlammen’, even though it is likely that nobody in the audience could actually make that claim.

Heidevolk had a hard act to follow but they pulled it off in style and now Equilibrium had two hard acts to follow. You can rest assured that if you missed this night, you’ll be getting another chance soon because Heidevolk are now set up very nicely to build something substantial in Britain with a whole stack of new fans who will be demanding promoters get them back soon. Een Met De Storm indeed. 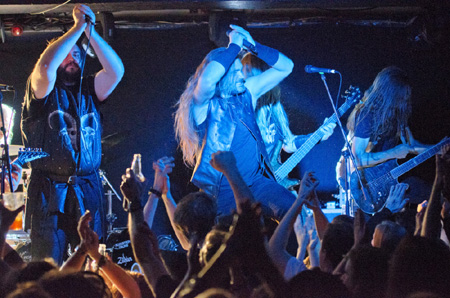 The biggest compliment that can be paid to Equilibrium, apart from managing to follow Finsterforst and Heidevolk, is that they made The Underworld feel like The Forum and those familiar with the London live scene will know exactly what we mean by that.

By the time they hit the stage it was impossible to get past the staircase into the main area as the whole Underworld was completely and totally packed with Equilibrium fans who knew every song and every move. 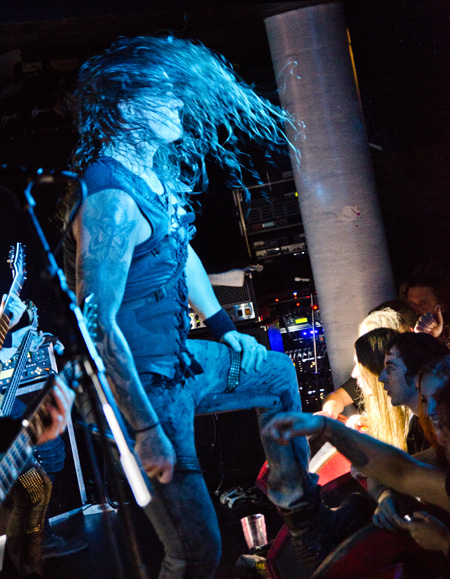 Frontman Robert ‘Robse’ Dahn has this down to a fine art and keeps the cliches to a minimum while he keeps things moving fast as Equilibrium deliver a storming, powerful, captivating set. Masters of their craft, no less.

Surprisingly the setlist is not dominated by songs from new album ‘Armageddon’ but instead we get an even spread of numbers from the previous four offerings and this variety is most welcome indeed. 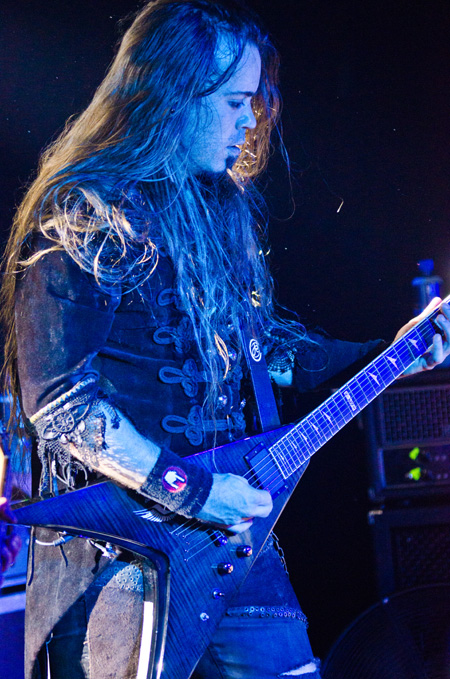 But it was an ‘Armageddon’ song that lifted the roof the highest and the band were clearly over the moon when ‘Born To Be Epic’ had the whole Underworld singing in unison. Five encores could easily have turned into more as Equilibrium left us with visuals and sonics that will remain etched in the memory for some time to come.

Tonight was an absolute, total and complete triumph for Folk Metal, a genre that was born in England via Jethro Tull and Skyclad and indeed, was born to be epic. All non-believers shall wither and fade as the heathen hammer is held high and the army becomes countless as stars in the sky. Folk Metal will mach dich frei, für immer. 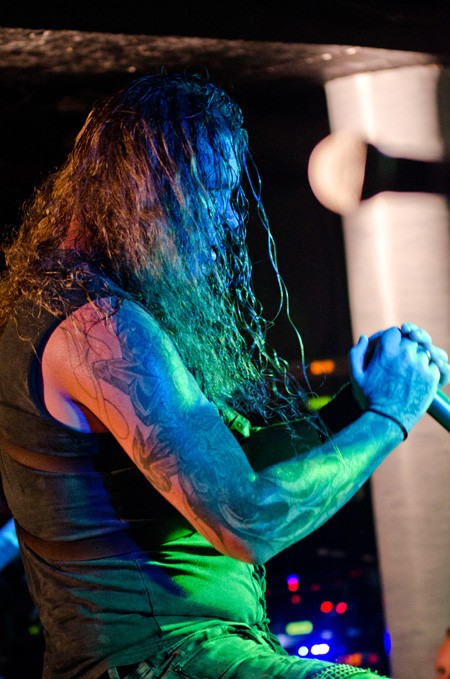