Who’d have thought German rock band The Scorpions would last 50 years? Despite plans that 2010s ‘Sting In The Tail’ would be the band’s last album and tour, and subsequent rumours of break-up, Germany’s biggest selling band (100 million records world-wide) are back for the half century. And on this evidence it’s one well worth sticking round for. 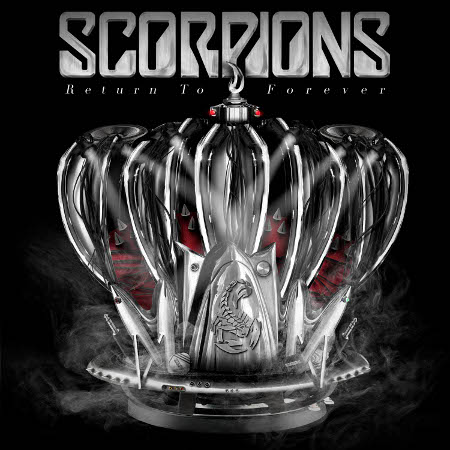 Formed in 1965 by guitarist Rudolph Schenker, who also handled the vocals at the time, the line-up settled in 1970 when they were joined by Rudolph’s younger brother Michael on lead guitar and vocalist Klaus Meine. Their first album, ‘Lonesome Crow’, was released in 1972 and featured bassist Lothar Heimberg and drummer Wolfgang Dziony. The album was a more progressive Krautrock affair, and during a tour with UFO Michael, jumped ship and Uli Jon Roth came in to finish the tour.

The band effectively split, and the new line-up effectively saw Schenker and Meine join and retitle Roth’s Dawn Road. Over four albums (‘Fly To The Rainbow’, ‘Virgin Killer’ and ‘Taken By Force’) with guitarist Roth, the band signed to RCA and moved in a much more successful hard rock direction. Disillusioned by the more commercial direction, Roth left just before the release of the live ‘Tokyo Tapes’.

Scorpions would find their greatest success with guitarist Matthias Jabs and, for a while, drummer Herman Rarebell. Between 1979s ‘Love Drive’ and, throughout the 80s, albums ‘Animal Magnetism’, ‘Blackout’ and ‘Savage Amusement’ were all huge sellers and tracks like ‘Rock You Like A Hurricane’ and 1990s ‘Wind Of Change’ became hits.

During the 90s releases were more sporadic and 2004s ‘Unbreakable’ was considered a return to form (the tour with Judas Priest successful too). The band announced retirement with 2010s ‘Sting In The Tail’ before re-recording some older songs for ‘Comeblack’.

Announcement of the 50th anniversary album and tour came in 2014, and this set features a mix of new songs (written 2011 – 2014) and recordings of tracks written earlier but never laid down.

Alongside Schenker, Meine and Jabs, the band are completed by drummer James Kottak and bassist Pawel Maciwoda. 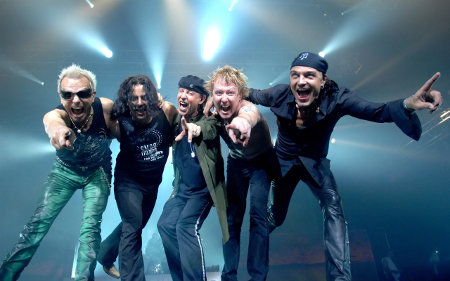 Opener ‘Going Out With A Bang’ kicks off with a bluesy riff and has a sleazy Metal feel to it. Meine’s vocals have a good range and between the serious riffage there’s some good guitar interplay. ‘We Built This House’ is a bit of an 80s throwback and mixes power ballad with louder more anthemic segments while ‘Rock My Car’ (classically cheesy lyrics) has a catchy heavy riff, the opening layered vocal harmonies nodding more to Motley Crue/Aerosmith.

‘House Of Cards’ is a more thoughtful track, showing just how good Scorpions can be when they’re serious in terms of performance and song and lyric writing. The vocals work well and hold strength throughout and the guitars can sear even in a slower song.

‘All For One’ stands out, especially with the melody layered under the vocals and lead guitar. Catchy riff and chorus to boot, this one will do well.

‘Rock And Roll Band’ is a heavy driving track, solid riff. Quick fire vocals, and there’s a hint of a metallic Blackmore to the riff.

Likewise there’s a hint of AC/DC to the opening riff of ‘Catch Your Luck And Play’, a mid paced song with a solid groove and anthemic feel. The mix of classic rock, Scorps Metal and sleaze continues with a good blend and ‘Eye Of The Storm’ is another powerful slower song.

In contrast ‘The Scratch’ has an uptempo shuffle (Cinderella style) feel that stands out – good rock n’ roll here.

Across the 12 tracks (16 on the deluxe edition) you get a good mix of classic Scorps, some tracks come over much better than others (not sure how well the sleaze fits in to some). Anyone else I’d say “lose the cheese”, but a thick slice of cheddar is OK once in a while.

This is a class way of celebrating 50 years and if they really do bow out now, the heads are still held high.