Status Quo have dabbled in acoustic performances before – some of their back catalogue songs have acoustic guitars on them like ‘Living On An Island’ and the incredibly under-rated ‘Someone Show Me Home’, and the band have performed the occasional song acoustically during radio and television appearances, but the recently released ‘Aquostic’ album, is the band’s first bona fide acoustic album – and long overdue it is too.

Such was the success of the album (incredibly, it sold more than 100,000 copies in the first nine weeks of its release – outselling Sir Paul McCartney’s last two studio efforts – and has spawned four singles to date) that the band took the bold step of booking a handful of live dates to showcase the album, and they chose the Quo stronghold of Glasgow to unveil their set on the first night of the tour.

This was Quo’s first time in Glasgow’s Royal Concert Hall (and for many of their fans too, I suspect), and as the audience took their seats, there was a feeling of anticipation in the auditorium. Even before the house lights went down, the back up musicians walked on stage to ready themselves and it didn’t take the sold out crowd long to get impatient, stamping their feet and singing the familiar “Quo-o-o-o-o” refrain, much to the amusement of the musicians onstage. As the house lights finally dimmed, the band took to the stage as to an orchestral version of their famous drone intro and a huge ovation.

Predictably, the band kicked off their set with the first single released from the album, ‘And It’s Better Now’, which saw frontman Francis Rossi with a huge smile on his face as band and audience got used to this new style of Quo gig. Usually striding about the stage in jeans and trainers, it’s strange seeing the band all seated and dressed up in posh shoes and shirts.

By the time ‘Break The Rules’ burst into life, the previously reticent crowd begin to let loose as they clapped along to the song which affords Rossi, who looks like he’s having the time of his life, his first proper guitar solo of the evening. 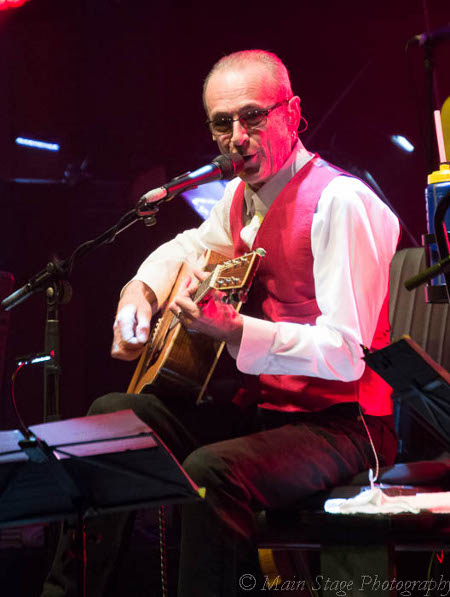 It seems very much like Rossi is the driving force behind these acoustic gigs and he certainly seems to be most at home on stage. Throughout the gig he’s laughing and joking away with the band and audience. During ‘Paper Plane’, he’s so busy enjoying watching the crowd clap along that he loses himself midway through, but simply laughs it off.

“It’s posh in here, innit?” he says at one point before adding “it’s good doing these (shows) because I get to wear my glasses during the gig so I can finally see you lot!” So much for his reputation of being a grumpy old man then, eh? 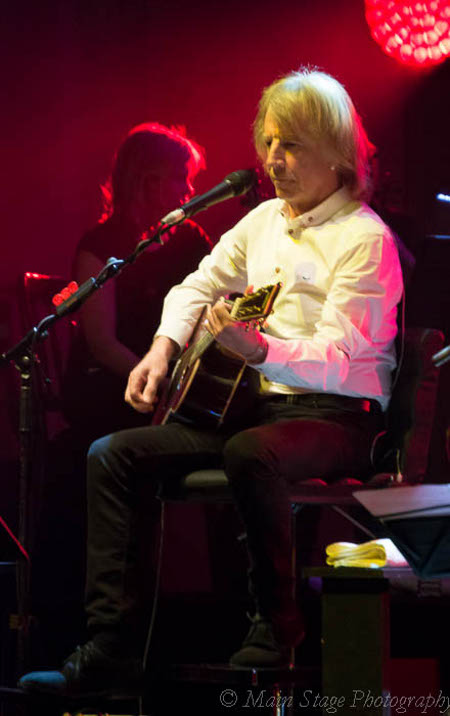 Whilst introducing ‘Down Down’, Rossi explains that the evolution of the ‘Aquostic’ project began with the song being performed acoustically for some adverts for an Australian supermarket. “Did you make any money?” shouts some wag at the back of the hall to fits of laughter all round. “Would you have made a schmuck of yourself for nothing?” retorts Rossi, showing he’s got a wicked sense of humour that’s sometimes lost on the audience during the band’s bigger arena gigs.

The other Quo stalwart, Rick Parfitt on the other hand just didn’t seem to be having such a great time. ‘Mystery Song’ might have had some members of the audience on their feet, but Parfitt was hard pushed to put a smile on his face. The song segued into ‘Little Lady’ which introduced the sextet of stringed instruments, tucked away at the back of the stage, which bolstered up the sound, but the performance from Parfitt was noticeably lacklustre. 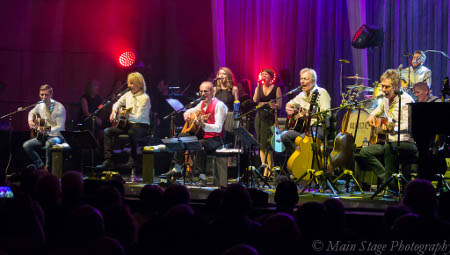 ‘All The Reasons’ had Parfitt’s vocals getting lost in the myriad of stringed instruments and percussion whereas the classic duo of ‘Rain’ and ‘Whatever You Want’ in comparison had Parfitt giving his performance everything he had. Parfitt’s performance did get noticeably better as the evening wore on, so maybe it’s just a confidence thing from his point of view?

The latter two songs certainly got the crowd on their feet though, with ‘Whatever You Want’ benefiting from percussionist Martin Ditcham’s and the string section’s unique take on the classic intro. 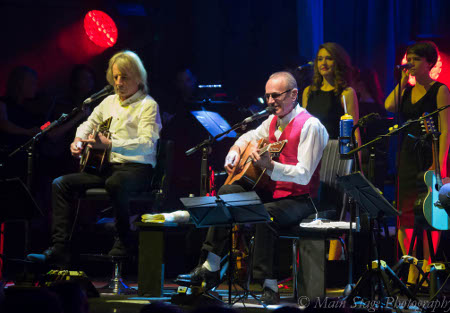 Delving deep into Quo’s back catalogue, the set list was made up of a generous number of their hit singles including ‘Again and Again’, which heralded the first appearance of the accordion, expertly played by Geraint Watkins, that has infuriated so many hardcore Quo fans with Parfitt leading the community sing-along during the chorus.

It also gave backing singers Amy Smith and Hannah Rickard their first moment in the spotlight with their voices slightly overpowering at time, much to the amusement of Rossi. At the back, drummer Leon Cave set the audiences feet tapping a steady beat as the familiar strains of their usual set opener, ‘Caroline’, finally brought the party atmosphere to the Royal Concert Hall as the air guitars and glow sticks came out in force, and by the end of the song, practically everyone in the stalls was on their feet. 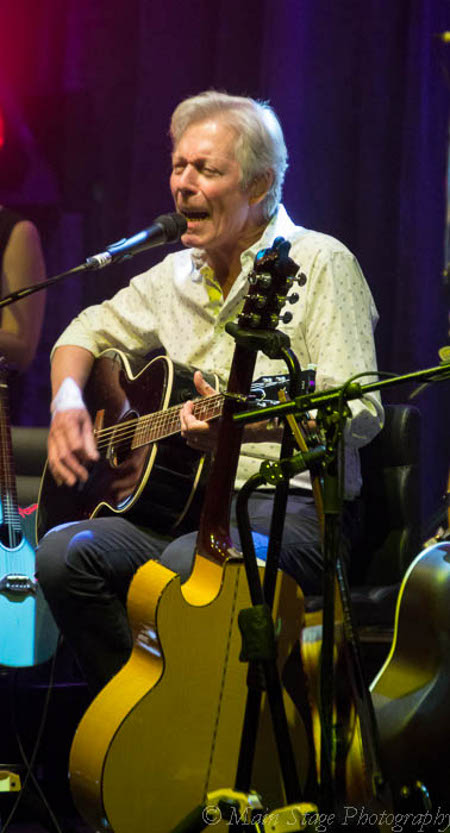 The inclusion of the band’s 1968 hit single ‘Pictures Of Matchstick Men’ had the audience resuming their seats, however, as the band earnestly strummed their way through the number.

There were a number of album tracks also included in the set like 1973s ‘Softer Ride’, which works so well in this format and was one of the stand out performances of the night. Likewise ‘Claudie’ is just made for this type of set up and was performed effortlessly.

Ditcham’s percussion bolsters Cave’s drum sound in this often overlooked number and it’s a song that surely deserves a place in their electric set list. Even the simplistic sounding ‘Nanana’ gets a look in here, with Rossi trying to conceal a fit of giggles midway through the number as he shares a joke with keyboardist Andy Bown. 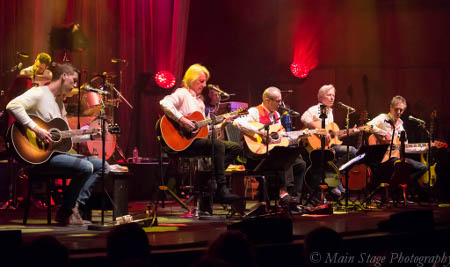 The inclusion of the 1983 hit ‘Marguerita Time’ in the set is an obvious one, but it’s still a controversial choice. It’s obvious because it fits so well with acoustic guitars and piano but it’s controversial because it’s been maligned by swathes of Quo fans for, well, years because of its pop credentials. There’s a light sway in the audience, but they all remain firmly seated throughout and unlike some of the other numbers, there’s no sing-along at the chorus showing that even acoustically this song divides opinion.

As the venue curfew approached, it was left to the evergreen classic ‘Rocking All Over The World’ which was a predictable high point in the set as the audience got to their feet and broke out their air guitars once again. With tremendous applause ringing in their ears, the band retreated to the backstage area before the baying crowd encouraged them to come back on stage for the final two numbers, ‘Rock Til You Drop’ and ‘Burning Bridges’. 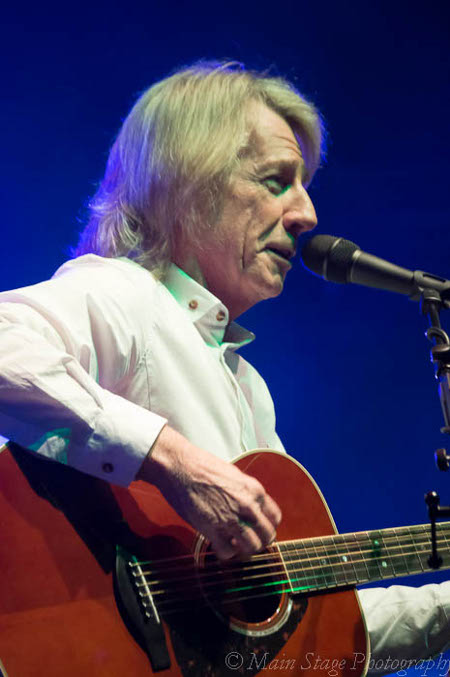 A predicable end to the set, yes, but it left the sell out crowd wanting more and that’s the bottom line. Some Quo fans have poured scorn on the whole project from the beginning, whilst others have embraced it wholeheartedly, and for those who decided not to go, they missed out on a unique Quo gig that was every bit as entertaining, if not more so, than some of their electric performances. 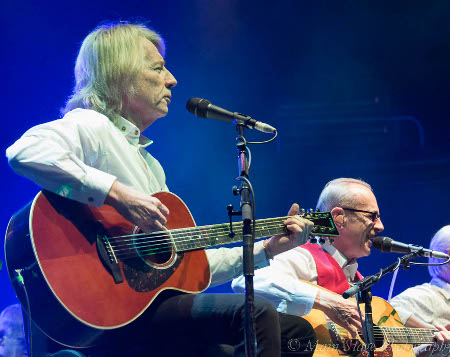 Setlist:
And It’s Better Now
Break The Rules
Again And Again
Paper Plane
Mystery Song
Little Lady
Rock N’ Roll
Caroline
What You’re Proposing
Softer Ride
Down Down
Pictures Of Matchstick Men
Down The Dustpipe
All The Reasons
Reason For Living
Rollin’ Home
Don’t Drive My Car
Claudie
Rain
Marguerita Time
Nanana
Whatever You Want
Rocking All Over The World
Rock Til You Drop
Burning Bridges 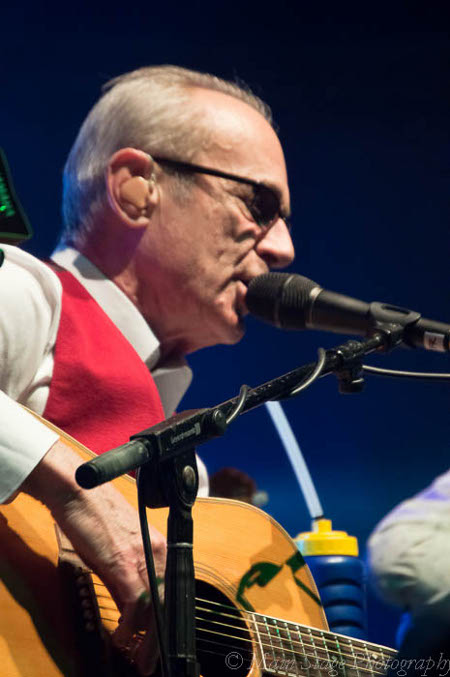