When it comes to giving out awards to the most hardest working band then that accolade must certainly fall to Vintage Trouble who for the past year have been touring endlessly.

Performing in arenas with Paloma Faith to playing the stadiums with rock giants AC/DC, as well as the big outdoor gigs with The Who and a prestigious slot at Glastonbury, Vintage Trouble have learnt through hard graft on how to work up a crowd no matter what genre of music the audience are into. Vintage Trouble have it all, from rhythm & blues, soul and good ole rock n’ roll.

Just two days before Vintage Trouble head back to the States to start the North American leg of the AC/DC tour, the Californians are in the Land of the Rising Sun to play a special showcase gig in promotion of their new second album ‘1 Hopeful Rd’.

An intimate venue, the ReNY is up on the third floor of a circular building near the bustling area of Shinkuyu in Tokyo. To obtain a ticket, fans had to visit their local Tower Records shop to buy a Vintage Trouble t-shirt which inside the packaging included a complimentary golden ticket to attend the album launch. Yes folks, Tower Records is alive and well in Japan, a time machine the size of superstores on many floors.

The bar in the foyer was busy before the gig but once Vintage Trouble came on stage and not one person left to get refreshments as Ty Taylor in a snazzy tartan suit held his audience totally captive demanding everyone to raise their hands and voices like a preacher at Sunday mass. It didn’t take long to get everyone converted to act on his every word and demand.

The house was swinging as the band provide tight and lively rhythm whilst the hip shaker Ty Taylor thrusts his pelvis and uses his steel topped microphone stand in a phallic manner. 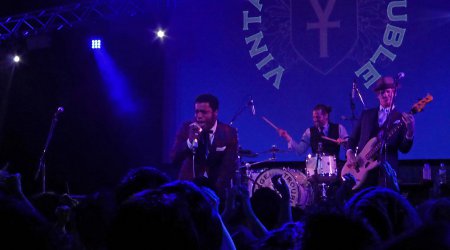 It’s the new songs that really shine the most, many of which have been worked hard on in the live set for the past year or so. The sunshine groove of ‘Angel City, California’ is an instant warmer.

Ty Taylor gets everyone to sway to the breezy ‘Doin’ What You Were Doin”. It was James Brown who sang ‘It’s A Man’s World’ but Taylor searches his soul in his own ‘Another Man’s World’.

Ty Taylor is not content with just being on the stage; he twice gets into the thick of it by jumping into the crowd without missing a note, firstly for the sliding blues of ‘Run Like The River’ which sees Taylor waltz through the crowd, shake my hand amongst many others to eventually sing from the balcony to those open jawed below. Later the energetic singer would be back amongst the troublemakers for the jiving funk of ‘Strike Your Light (Right On Me) which features the drum roll antics from Richard Danielson.

Taylor gets everyone down on their knees to jump right back up for the chorus finale. 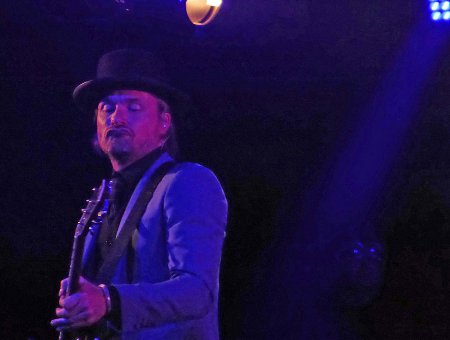 Ending the hour long set with the ballsy ‘Blues Hand Me Down’ from the ‘Bomb Shelter Sessions’ where Taylor showed no signs of fatigue by spinning around on the spot to the rhythm left everyone dizzy except for himself.

They came, they saw, they conquered, they left the building. This is just the beginning of 1 very long hopeful road.

Mark Taylor interviewed Ty Taylor in London last July in an interview filmed for Record Collector magazine where Ty spoke about ‘1 Hopeful Rd’ as well as opening for AC/DC and his love of music. You can that watch that interview again right here.

Vintage Trouble have just released a new promotional video for ‘Doin’ What You Doin’.