Billed as the ‘Guitar Event Of The Year’ the rising star of Joe Bonamassa really had to shine brightly to live up to such an exclamation. 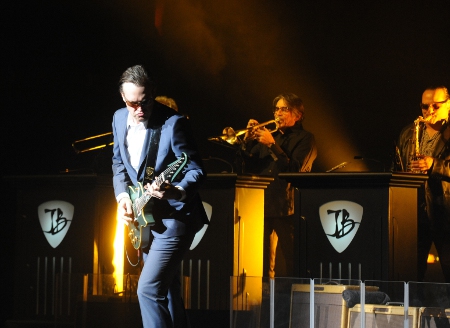 But Bonamassa took it all in his confident stride, breezing onto the stage in his smart grey suit and shades, relaxed without the need to wear a tie.

It was a night where Joe Bonamassa let the music do the talking, only pausing to refer to the venue by it’s rightful name of Hammersmith Odeon and later to introduce his fine set of accomplished musicians who shone throughout.

Opening with the rare Jimi Hendrix track of ‘Hey Baby’ which neatly smoothed into ‘Oh Beautiful’, the first half of the set took in tracks from his latest and eleventh album ‘Different Shade Of Blue’ which just needs to be heard live where Bonamassa reinterprets these songs to a higher level with breathtaking solos full of fluid audacity.

Howlin Wolf’s ‘Hidden Charms’ benefitted greatly from the addition of a brass section of sax, trumpet and trombone which brought a stylish sound and authentic look with the jazzy looking 1920s podiums.

But it’s not all just about Joe Bonamassa as his band provide a very solid backbone for the guitarist to explore. Faithful drummer Tal Bergman pounds the drums to pulsating effect on ‘One Less Cross To Bear’ whilst “new” keyboardist Reese Wynans is sublime on the Hammond. 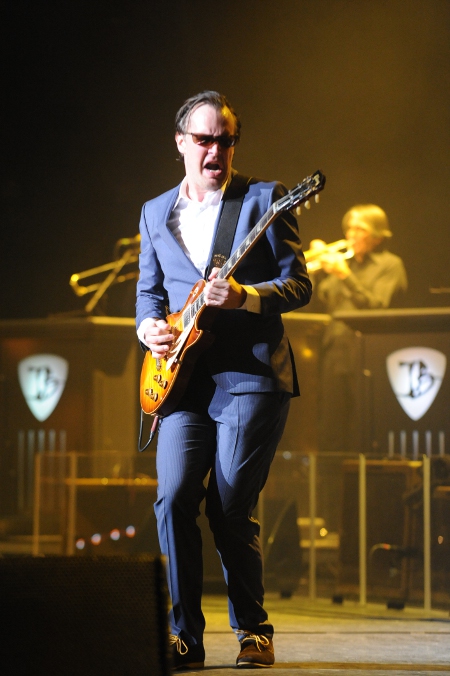 Joe Bonamassa delights enthusiasts with a plethora of guitars from his Gibson Les Paul to his use of the Fender Stratocaster and Telecaster but he handles the vintage 1959 ES 330 Gibson like a new born baby on ‘So, What Would I Do’.

A superlative solo on ‘Sloe Gin’ even brings a satisfying smile to Bonamassa’s face. Young Scottish lass Eilidh McKellar guests on the steam rolling encore of Muddy Waters ‘All Aboard’. Beth Hart guested a couple of nights before.

It will be interesting to see what guests Bonamassa has in store for the last two nights of this four night stand.

An eclipsing evening which leaves his contemporaries in a different shade of the blues.

A few tickets are still available for the Saturday 21st show from the 24 hour box office: 0844 249 4300 or online from eventimapollo.com.