Of the all sad deaths on the rock scene of the last year, including Jack Bruce of Cream, Wayne Static of Static-X and the legendary Joe Cocker, one that went completely unreported in the rock press was that of Matthew Trippe.

Matthew John Trippe was adopted at a young age and grew up in Erie, Pennsylvania. He had a troubled childhood and clashed with his strict Catholic parents. As a child he was fascinated with Satanism and also fell into occasional crime. Friends from his youth remember him as an oddball and a dreamer. By his own admission he was an average guitar player.

Trippe came briefly to fame in 1988 when he launched a lawsuit against Doc McGhee, the manager of Mötley Crüe claiming that he had been bassist Nikki Sixx’s doppelgänger in the band for just over a year from May 1983 to the summer of 1984 and was owed royalties for writing many of the band’s songs in that time.

He claimed that he was secretly recruited into the band by guitarist Mick Mars after the original Nikki (real name Frank Ferrano) had been injured in a car crash and was unable to perform. Trippe claimed he fully replaced Ferrano for this time, recording, writing, appearing in videos and touring with the Crüe.

Trippe said that he was later ditched by the band when he got arrested and served some time in prison for a robbery that he claims he was set up for. He alleged that by that time Frank Ferrano had recovered from his crash and resumed the role of Nikki Sixx in the band. 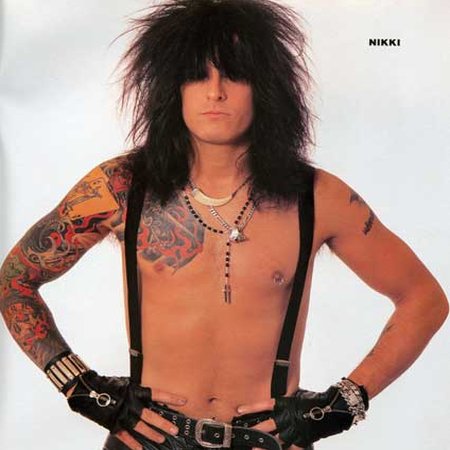 In his claim Trippe pointed out several alleged differences between photos of Nikki Sixx in different eras. He claimed these differences such as shades of eye colour, chin shape, weight gain and even the belly button being different in different photos were because some photos showed him and others showed Frank Ferrano.

At the time Kerrang! magazine made a news piece out of the case and ran an interview with Trippe showing the supposed photographic differences and likenesses.

Although Trippe did look vaguely similar to Nikki Sixx (and claimed he wore a wig while in Mötley), the photographic evidence wasn’t convincing enough on its own and overall the story seemed too far fetched to be given any credibility. It looked possible but extremely unlikely. Predictably enough, it was later announced that the case had been laughed off and dropped by the courts. 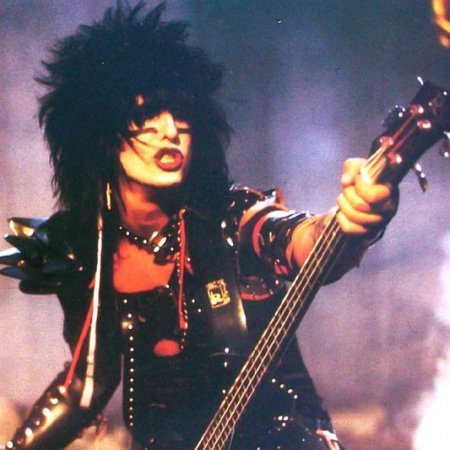 Trippe went on to form a band called Sixx Pakk in an effort to cash in on his new found fame. Needless to say after a brief fifteen minutes in the spotlight they disappeared into the ‘where are they now?’ file never to be seen again.

Trippe’s crazy plan to claim to be someone he wasn’t was then largely forgotten.

I’d always found the case curious though. I like a mystery, even if the mystery is only about why this guy made up such a ridiculous story? It plainly was just a stupid story, wasn’t it?

Nikki Sixx (aka Frank Ferrano, the real Nikki Sixx) and Doc McGhee have always strenuously denied Trippe’s story as complete fiction. Likewise, Trippe always stuck to his story as being the truth.

One of the problems in deciding who is telling the truth here is that while I’m sure they’re nice guys, Ferrano, Trippe and McGhee are all self-confessed former drug and alcohol abusers with a string of arrests and convictions between them. Frankly, I doubt a jury would have trusted any of them on a witness stand especially if they stood to win or lose millions of dollars over it.

So I looked up Matthew Trippe a few times online and came up with some other witnesses. Most of them quite honestly don’t have many nice words to say about Trippe.

One childhood friend of Trippe’s said: “I grew up with Matt in Erie. [He was a] weird, weird dude.”

Roger Hemond, who one of Trippe’s former band mates in Sixx Pakk, called him “a dorky, stuttering, slightly overweight gentleman, who held his cigarettes between his middle two fingers” and at times a “contemptuous, alcoholic moron.”

Jerry Rollins Oglesby, the Private Investigator that worked on the Trippe/Sixx case before it fell through described him as “an autistic genius in a child like mind.”

He seems to have been just the kind of troubled guy who would make up a crazy story like this but probably not the type who could convincingly pull it off for long. Roger Hemond also commented: “I’ll tell you one thing, if I were going to try to pull what Matt alleges Thaler/McGhee did, I would probably pick someone a lot like Matt to do it with, because nobody would believe him completely- he was a lunatic!”

And the Nikki Sixx of 1983-84 was certainly a lunatic too. Drink and drugs were regularly in excess. Numerous road stories emerged from those times of Nikki getting up to crazy antics with groupies, throwing TVs and furniture out of hotel windows, getting arrested while naked and my personal favourite: snorting a line of ants with Ozzy Osbourne.

You really can’t top that one but it doesn’t prove a court case. I believe both Trippe and Ferrano, and actually a good many more of LA’s rock scene in the early 80s would have been willing to give all those things a go. Trippe was reported by an eyewitness on another occasion to have eaten a cockroach while fooling around in a drunken state.

The first thing I found online that really made me think there might be more to this mystery than a lunatic raving was this quote from Roger Hemond of Sixx Pakk:

Now, that is odd isn’t it? I mean blurred photos of rockstar’s belly buttons and insect eating contests wouldn’t be expected to stand up in court, but documents from the Library of Congress? Surely, that is some kind of real evidence. So why did the case really get dropped if it wasn’t from lack of evidence as we’d all assumed?

Jerry Rollins Oglesby, the private investigator that worked on the case takes this point up and says that the case “was dismissed on a technicality in the statute of limitations in contract tort law. In Florida, the statute of limitations is four years on a contract tort. We sued in Florida. In California, it is two years. They, the record label’s attorney joined forces with Thaler and McGee Entertainment and contrived a viable statement that is a matter of record in Tampa Florida Circuit Court.”

“I quote: ‘We are not saying that a contract was struck with Matthew Trippe but if it was signed, it would be signed in California, therefore the statute of limitations would have expired.’ The case was dismissed. It is a matter of record ladies and gentleman.”

So, it wasn’t for a lack of evidence that the case was dropped at all. There was enough evidence for a case. Doc McGhee himself confirmed that the case would have happened on the Chronological Crüe website:

“It was just pretty bizarre that this kid took it to that… and that a lawyer, or a judge would even allow somebody to do this.”

I found a few other interesting witnesses comments too.

Steve Contrascere who was part of Trippe’s legal team along with Jerry Oglesbey and Attorney Tom Smith, said of him later:

“It’s a shame that the power of the media will never give him his due. Mick Mars is the only one who can tell the true story. If you could hear Matthew play and sing the music he wrote for them and play the studio tape at the same time, it was like stereo and genuine.”

Roger Hemond from Sixx Pakk was curious about Trippe’s tattoos: “He had all of the tatts through the ‘Theatre Of Pain’ years. They were not cheaply done and there were several. He had a wife, a brand new baby boy, and no money – so I have no idea how he would have paid for them.”

Steve Contrascere noted that later “Frankie got more tattoos so they wouldn’t be the same as Matthew’s.”

The parent of one of Trippe’s acquaintances, identifying herself online only as Swampwitch said: “I too was exposed to MJT back in the day. He was indeed a good talker. I did not know if he was telling the truth or not but he had a lot of photos of him and Vince backstage/on stage with and without make up. Strange dude!”

A recent friend of Trippe’s said: “I know Matt for the last 15 years, and I understand he has an alcohol problem, but if you ask me he is telling the truth about those lyrics. I have personally seen his work and I like it. There is something in common.”

The oddest story however came from an old friend of Trippe’s who was keen to remain anonymous. He alleged that many years ago the following events happened:

“After work one night I went to MJT’s house and brought some beer. When I arrived at his house there was a Blue Mercedes in the driveway that I had never seen before. I walked into the house like many times before after work and Doc McGee was right there in the living room with some husky looking Italian guy.

“The guy said to me if I wanted to live then ‘you better go back to wherever you came from and pretend you were never here’.

“I did leave and waited in the bushes next door and drank a few beers waiting until they left. When I went back to open the door it was locked and MJT would not answer for at least 15 minutes after I was banging. I asked him what in the hell was going on and he was crying and stuttering like I had never seen before.

“I went back to get the beer that I left in the bushes and when I came back the door was locked again and he just yelled through he door that he would call me tomorrow.

“Well that was the last I had seen him… he literally just vanished for three months. To this day I am freaked out about what happened, I don’t know the details however I know for a FACT it was Doc McGee who was in his house.”

Perhaps there is something more to this mystery after all? Sadly, we’ll never know for sure. Matthew Trippe passed away on 1st December 2014 at the NCH Hospital, Naples, Florida.

His most recent neighbour, Patti, said of him: “With all that has been said (about him) and some quite vicious, Matt was a truly wonderful man with great qualities, yes he had issues, but his kind heart and his willingness to help anyone in need was in the forefront with him.”

The final word, goes to Jerry Oglesbey, who summed Matthew up as “a strange bird in his own right and I believe very strongly that this should be the final note on this mystery of judging a man you don’t know and never will because he is silent.” 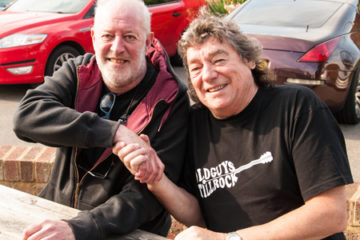