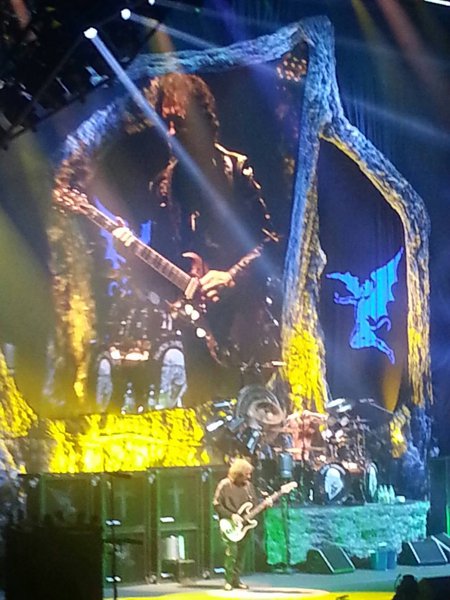 Black Sabbath guitarist Tony Iommi has confirmed that our exclusive of 16th May which stated that Sabbath’s London Hyde Park appearance on Friday (4th July) will not be the last ever Sabbath show.

Tony released a video just before Friday’s gig thanking fans for their support and he ends it by saying: “See you on the next tour”. You can see the video at the bottom of this page.

Geezer Butler recently spoke to The Pulse Of Radio and said he thinks that Sabbath already have a head start on a new record, explaining: “We’ve still got four tracks left over from ’13’ so maybe we’ll fill in the other four or five tracks and put out another album — if it’s right. We wouldn’t do it just for the sake of it, or the money or whatever. But yeah, maybe.”

Vocalist Ozzy Osbourne added: “I never say never. I never thought after 35 years I’d [be back with Black Sabbath], have a No. 1 record and a sold-out tour.”

Tony was diagnosed with lymphoma in January 2012 and completed his treatment in March. He is now awaiting an update on his condition.

“I’m at a stage now where I have no support, which means I have to see whether the cancer is coming back or if it’s still there or what,” he said. “I just don’t know. It’s a bit of a worry. After we finish this tour I’ll go in and have a scan, so we’ll see what that shows up.”

“But the show at Hyde Park will a great way to end the European tour,” he added. “It has a really great bill, with a really good mix of people. I think it’ll be special.”

And it was indeed special and we will be publishing our review of Friday’s event as soon as our reporters sober up.