After the complete washouts at other festivals this year, it was so refreshing to be greeted with beautiful blue skies on the morning of the second High Voltage.

For anyone that hasn’t been before, it’s a long trek from the tube station to Victoria Park, but the streets (and especially the pubs en route) are littered with people ready to rock. And it’s a great atmosphere as you can sense everyone’s anticipation for the day ahead.

Once on site, I headed straight to the main stage to catch Michael Monroe kick off festivities and true to form, they got everyone dancing in the sun. The nine-track set started with ‘Trick of the Wrist’, my favourite track from the recently released ‘Sensory Overdrive’, although you could hardly hear when he played the sax.

As you’ll read in several reviews, the sound on-site was appalling. I appreciate that High Voltage is set in a park in the middle of a residential area, so volume will always be an issue, but it was the mix that was wrong for me. In fact, it seemed like the soundman was asleep for all acts, apart from the headliners.

Sound issues aside, the next couple of tracks ‘Got Blood?’ and ‘Modern Day Miracle’ continued to warm up the crowd. However, it was the Hanoi Rocks cover of ‘Motorvatin’ which got them really rocking. Michael Monroe moved close to the audience and new guitarist Dregen followed. This sent the audience wild and Michael was there shaking hands with his adoring fans, and this continued when they played the Demolition 23 cover ‘Hammersmith Palais’. Dregen fitted in perfectly and seemed to gel more with the band than his predecessor, Ginger. 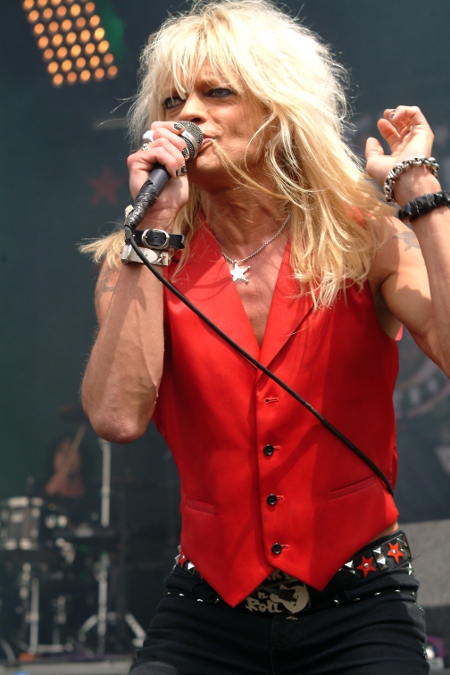 We were treated to another ‘Sensory Overdrive’ track ’78’ and then Michael climbed the side of stage for the second Demolition 23 track. He dangled there for a while, looking a little unsteady at one point, but continued to blast out ‘Nothin’s Alright’ until his feet returned to terra firma. Then it was back into the crowd again for another Hanoi Rocks song ‘Back To Mystery City’, even apologising to one of the guys in the front row.

He closed the set with the anthemic ‘Dead, Jail Or Rock n’ Roll’ and the crowd seemed extremely pleased with the way the day had started. It was a solid set, filled with crowd-pleasing tracks you’d expect for a festival set-list, and there was a large enough crowd considering it was so early in the day.

Next up were 90s rockers SKIN. The familiar backdrop appeared and they launched into ‘Born To Rock ‘n’ Roll’ taken from their 2010 release ‘Breaking The Silence’. A great way to open their set and prepare their fans for the rest of the performance which would focus on classics.

‘House of Love’ got everyone singing along, and I think even non-Skin fans were joining in by the end. Vocalist Neville MacDonald commented on what a good idea High Voltage was, especially happy that there was also a beer festival. The whole band looked so happy to be on stage, and it was great to see them all together again. 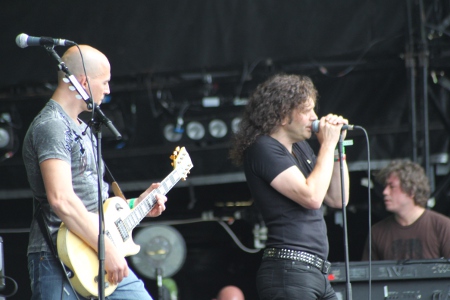 The audience were treated to an extended version of ‘Take Me Down To The River’, followed by ‘Look But Don’t Touch’, but it was ‘Tower Of Strength’ that got the best reception. The band seemed to be completely dedicating this to the die hard Skin fans in the front row, and I’d say that the audience were the ones breaking the decibel limit this time.

The final track had to be the legendary ‘Shine Your Light’ which Neville gave such an over zealous performance that he smacked himself in the mouth with his microphone. At first it looked like he’d had a snogfest with a girl wearing bright red lipstick, but as the camera zoomed into his mouth filled with blood, it was apparent what had happened. He even said “I’m bleeding for you, man” but this little injury didn’t stop him delivering a truly spectacular vocal performance.

It is such a shame that this is their ‘farewell’ show after such a short comeback, as they seemed as tight as when I first saw them nearly twenty years ago. If that is the last time I’ll get to see Skin then it’s a performance I’ll always treasure, but I get the feeling it won’t be the end.

After heading back to press to get my interviews out of the way, the next performance I got to see was Slash, accompanied by Alter Bridge front-man Myles Kennedy. 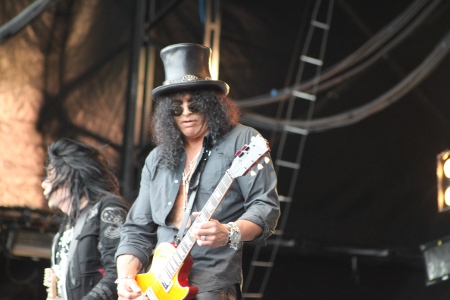 My first comment on this set was the odd choice of songs. Don’t get me wrong, Slash has a lot of great stuff from his colourful career, and I love it all, but I found it strange that he choose to play more Slash’s Snakepit than tracks from his debut solo album which he released just over a year ago.

In fact opener Slash’s Snakepit’s ‘Been There Lately’ didn’t seem to set the crowd alight, but this was quickly rectified as we were treated to two GnR covers, ‘Nightrain’ and ‘Rocket Queen’. Mini moshpits peppered the crowd, and we certainly had our very own going on, although I was thankful for the next track ‘Ghost’ to let me chill out a little bit.

It gets harder to dance along these days as the years zoom by, and it was great to stand back and listen to Myles Kennedy’s beautiful voice. And the respite continued as they played another Slash’s Snakepit track ‘Mean Bone’.

After wishing Slash happy birthday, Myles handed over the microphone to bassist and Sin City Sinners vocalist, Todd Kearns. A little underwhelming for most of the crowd, as we’ve all been a little spoiled by the other ‘special guests’ at recent performances, but he did a cracking rendition of ‘Dr Alibi’. One more Slash’s Snakepit track ‘Speed Parade’ and then it was time to really get the crowd sweaty.

First up was ‘Sweet Child O’ Mine’ which is guaranteed to get the audience singing along, but the next track, Velvet Revolver’s ‘Slither’, got all the snake hips going too. And of course, the obvious closer was ‘Paradise City’.

The crowd seemed to enjoy the entire set and Myles Kennedy appeared to sing the Guns n’ Roses covers better than I’ve ever seen Axl do. But I don’t know if it was due to sound issues, but I was a little underwhelmed by Slash’s guitaring. All that aside it was a great show and a great way to get you in the mood for tonight’s mighty headliners Judas Priest.

Not wanting to hog all the best bands at High Voltage, I shall leave one of my fellow MT writers to go into detail about the Priest show, but my take on it is that it was nothing short of fantastic.

I’ve read a lot of positive comments about KK Downing’s successor, Richie Faulkner, injecting a new lease of life into the band, and they’re all right.

Last time I saw Rob Halford he was hobbling on stage, but not this time. His performance was spectacular, and after four encores, they finally ended the show with ‘Living After Midnight’. 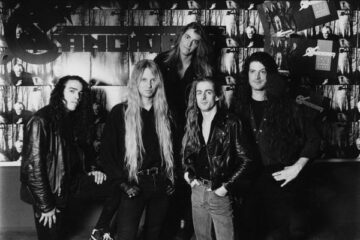