Living in South East Asia, it’s not easy to overlook the fact that a Metal concert is either going to be a “core” oriented show or proper extreme Metal that shreds every note like the wall street shreds dreams.

In the past I’ve had to travel from my hometown of Bangkok to Bali in 2011 to catch Iron Maiden, and to Singapore to watch Judas Priest in 2012. On both occasions I’ve spent shit loads of money, got way too drunk and been close to getting my ass kicked in a foreign country – all for a good cause.

So it’s no surprise that when promoters released the posters for the Paul Di’Anno shows that were to take place in Singapore and Ho Chi Minh (which I am just going to call Saigon here for unexplainable reasons) – I knew I had to make a move. Since I had never been to Saigon, and Singapore is a rather expensive place, I booked my flight to Vietnam.

Disclaimer: This may contain information about Paul Di’Anno. Any anti-Paul Maiden fans had better skip to the next article.

My friends and I arrived in Saigon on the evening of 26th March and checked into the Mai Anh hotel. The arrangements were made by my friend Mr Khoung Le (or “K” as he would have us call him), who is the promoter for Paul in Saigon and the founding member of Vanity Production, and in the past has hosted bands like Cthonic, Chelsea Grin, Rome (Jerome Reuter), and other acts in this Metal hell hole, where you must have the band perform in front of a panel from the ministry of culture, and all the lyrics translated into Vietnamese… or bribe ’em.

I’m still waiting for the video of grindcore band Wormrot auditioning in front of withered old men who’ve probably been in their seats since the Vietnam war. 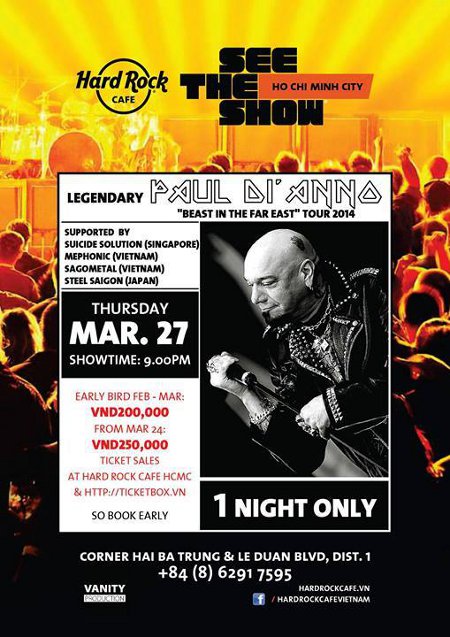 The Singaporean event was handled by Street Noise Productions that is run by Eric Poh and has hosted bands like Havok, Lord, and many other bands. Eric also came along to Saigon and we enjoyed beers and spicy chicken wings together.

The event took place at the Hard Rock Café Ho Chi Minh where indoor smoking is permitted! The show started off with local band Mephonic playing a blend of melodic and chopping guitar riffs and the surprise of a clear yet aggressive singing frontman performing the songs in Vietnamese and blowing the crowd away with interesting and banging songs.

The guitarist happened to be a fellow Charvel/Jackson lover so we hit it off nicely after the show. The next band to perform was Sagometal. They started off with an extreme Metal vibe but during the set introduced a musical interlude which was infused with oriental melodies that was played by a veteran rocker with an Army-like outfit. This was a bizarre but interesting feast to the sensations.

Up next were Steel Saigon, screaming 80s steel from every pore. Interestingly, the guys in the band are all Japanese and have been living in Saigon for a few years. The band had a great audience interaction, getting the crowd to sing along and raising their fists.

By the time my bottle of Jim Beam was over it was time for Paul Di’Anno to get his show going. The setlist mainly focused on the first two albums of Iron Maiden and the supporting band was Suicide Solution from Singapore. This band has already released three full lengths in Singapore, and with a crunchy song named ‘Drugs n’ Kisses’, theirs is a sound that is going to please the lover of 80s Metal.

The first few songs saw some technical difficulties, and the show was briefly put on hold to fix these up. After the first three-four songs, the show took off like a steam engine and the next hour and a half (or whatever of it that could be remembered the next morning) went by like a thunderstorm.

Yours truly was up front headbanging with the rest of them, and may have angered a boyfriend or two (blame it on the Bourbon.) By the time the show finished we were all exhausted, burning in sweat and the sole of my shoe had come off.

Despite his age, poor health and the fact that he now walks with a skull-headed staff, the man can still sing. His energy didn’t drop during the whole show, even though he had to sit for a bit because his knee was acting up.

All the songs were performed with energy and interest and I’m sure all the fans of the first two Maiden albums would appreciate getting to listen to these songs live – most of which the current line-up have put away in the treasure chest – I know I did.

There is much dispute over Paul’s personality and attitude in the media, but when it comes to the energy and delivery, one wouldn’t be disappointed. The sound inside the Hard Rock Café was great and the staff really friendly and helpful!

My team spent two more days in Saigon, shopping, eating and drinking 50 cent beers on the side of the road. Paul was two doors down from us in the hotel and we shared a couple of meals together. During the course of my stay I had a few brief and casual interviews with Paul which will be put up separately.

On the last night, yours truly found himself drinking with the boys of Suicide Solution, taking over the computer at the Lulu bar and turning it into a five-hour Karaoke session, screaming tunes from Dokken to Judas Priest to Rod Stewart till about seven in the morning.

I extend a warm appreciation to the hospitality shown by K and Lee from Vanity Production, Vietnam. K made sure that we all (including Paul and Suicide Solution) tried local foods and local places. We left Saigon with great memories and vow to return.

The food was great, the drinks were cheap and the hospitality heartfelt. And when it comes to women in uniform, Vietnamese girls know how it’s done.