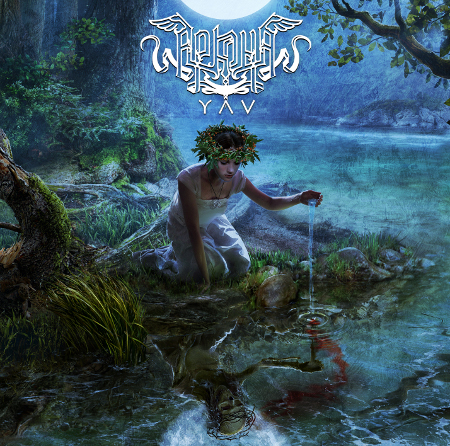 Back in 2002 these Russian Pagan Folk Metal maestros unveiled their demo called ‘Rus” and have been building on it ever since.

From their debut studio album ‘Vozrozhdeniye’ (translated means ‘Revival’) released back in 2004 and five other studio albums later; we finally arrive at ‘Yav’ which features some stunning cover artwork; one of my personal faves so far this year if I’m to be honest with you. There are nine tracks chained to the busy and layered sound which weaves contemporary folk instrumentation with their metallic overtures.

There are some really hard-going moments so I would say that this isn’t for the faint of heart. The curtains are raised with opening track ‘Zarozhdenie’ which effortlessly passes the nine minute mark and presents progressive tendencies without breaking sweat. ‘Na Strazhe Novyh Let’ starts out fairly traditional with pace aplenty and putting the Metal firmly in the face of those who stand by and watch. Gradually the textures change as other instrumentation enters the equation. It proves to be one of several highlights on ‘Yav’.

The various voices that add the drama and tone to what they deliver belong to front-woman Masha “Scream” Arkhipova, and she really would be a sight for sore eyes in a live environment if Arkona played some UK dates. I cannot imagine she would merely stand still throughout their show as energy is forefront on some of their tracks.

‘Serbia’ gallops along for the most part adding some atmospheric points at the beginning and at the end, whilst ‘Zov Pustyh Dereven’ starts out with sound effects and some soft guitar. Without having any major success translating these song-titles all I can tell you is that they base a lot of their output on Slavic mythology. In fact, their band name is taken from the last castle-like pagan Slavic city in case you were wondering.

The palette continues to be explored as Russian traditional instruments add quirky personality to their music on ‘Gorod Snov’ and ‘Ved’ma’. Regarding the latter of these two, the above comment is appropriate once the scream amongst the crackle of a bonfire have been faded out during the opening few moments. ‘Chado Indigo’ clocks in at just under an impressive eight minutes, and is rolled out with Arkhipova whispering in menacing tones before the rest of the band jolt and sway with varying tempos.

When I looked up the word ‘Jav’ which is the title of the longest track embedded in this busy sounding album, I found to my interest that it translates directly into ‘U.S.’ from Lithuanian. May be relevant, maybe it isn’t, but I thought I’d share that observation with you. Their progressive nature is enhanced during this 13 minute and 51 seconds of building tension and elaborate showmanship.

This album wears emotion and creativity on its sleeve, and is another example of the concept that music can transcend language.

Although I had no idea what was going on throughout the numerous visits I made with this album, I always found a lot of enjoyment from ‘Yav’. It spoke in various ways using the musical combinations, and mostly through the expressive voice of lead singer Masha “Scream” Arkhipova, who was husky and raw one moment, before adding whispers the next.

She provides a fascinating novelty which marries the musical backdrop to obvious dramatic storytelling and consequently conjuring a very interesting overall style. ‘Yav’ is for the brave and those who are bored of the usual Metallic output.

Weapon UK: 'Rising From The Ashes'