Hailing from Coventry, Beholder are steadily making a name for themselves since they emerged (as a covers band) back in 2007. 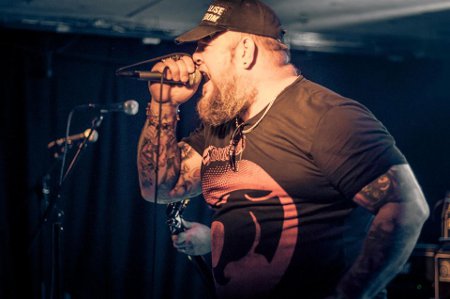 Unusually for such a young band they are self managed and self promoting, placing their destiny in their own hands. As a result of the freedom this affords them, the band are quite happy to do whatever they want – be it headlining the S.O.P.H.I.E stage at Bloodstock or hitting the road for a short UK tour playing wherever and whenever they like, and it was on just such a small UK tour that I caught the band live at Ivory Blacks in Glasgow.

As the lights go down, the band’s intro tape (taken from the ‘V for Vendetta’ movie) plays and it’s clear from the off why Beholder are headlining tonight. Nothing against the other bands on the bill but from the moment the band walk on stage to the moment they leave it, it’s clear that they know what the audience wants and they deliver exactly that.

There’s a generous amount of songs from the bands current opus, ‘The Order Of Chaos’ (available at http://beholder.bigcartel.com) including set opener ‘Toxic Nation’ which has vocalist Simon Hall with the audience under his command from the off as he orders them to raise their hands in the air and get involved as opposed to standing just watching the band’s set.

While Hall has some fun with the audience, bass player Simon Fielding has his first chance to get up close and personal with the front row too. ‘Black Flag’ follows in quick succession as Hall tries to get the crowd enthused, which is not altogether a fruitless task as a member of the audience is hoisted aloft much to his delight and that of the band before the audiences’ hands are once again thrust skywards.

‘Killing Machine’ (also from the new album) has Hall urging the crowd onwards as the first mini mosh pit of the evening breaks out. Hall knows how to get the very best from a crowd and goads them with a phrase that is pretty much guaranteed to elicit a reaction – “Do you think Edinburgh is a patch on Glasgow?” he bellows and the crowd shout back an emphatic “No!”, much to the amusement of the whole band. While all this is going on, the band behind him keep the song rolling on with drummer Chris Bentley especially good as he holds down a simple but steady beat. 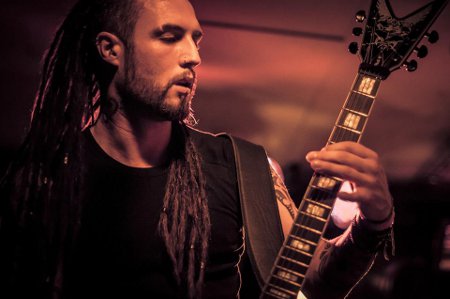 Hall plays the role of consummate front man all night, though, and his humour is infectious. Sometimes he’s quite disingenuous (or so it seems) whilst at other times, he just tells it like it is. Regarding Scotland’s impending vote on Independence, Hall tells the crowd, if there isn’t a passport checkpoint at the Scotland/England border next time the band come to Scotland then “it’s a big mistake not getting rid of the corrupt Westminster politicians”. Response to this is somewhat muted, however, as the Independence debate in Scotland is a something of a prickly subject.

Back to the music, and the band continue their set with some more familiar tracks including ‘Razorline (On The Edge Of Insanity)’ and the title of the band’s previous album ‘The Awakening’, both of which go down a storm with the audience and add a bit of perspective to the ongoing evolution of the band.

For me, however, the best song of the night was another new one, ‘Frozen Steps Of Utoya’. It may be new to some people in the audience, myself included, but that didn’t stop it creating the biggest mosh pit of the evening and the band head bang away in unison on stage whilst the audience do the same – great stuff.

Beholder definitely have what it takes to lead the way in British Metal in the future, and Hall deserves to be on a bigger stage as his entertaining demeanor had the audience laughing along and ensuring that every single audience member experiences the best gig possible. The thing is that the band also have the tunes to back everything else up, so if you haven’t heard of Beholder yet, it’s only a matter of time before you turn up at a Festival to find these guys headlining it. 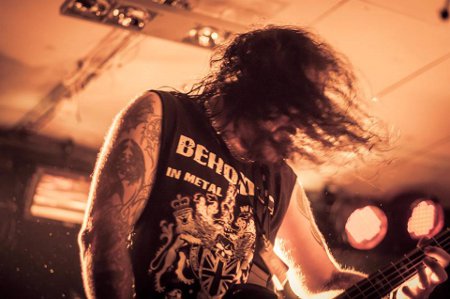 A word should also go out to the main support act, Tech-Metallers Cambion, who were playing their first ever gig in Glasgow (and indeed, Scotland).

‘Virus Part 3 – Death’ has drummer, Frank Dennis, throwing out a frantic beat whilst bass player Johnny Walker head bangs for all he’s worth as the sound man struggles to get all the levels corrected. Some long guitar chords herald ‘Salem’ before the song slowly builds up to a great vocal performance from Elliott Alderman-Broom as Dennis shows his skills once again before the mid section has every member of the band head banging on unison. 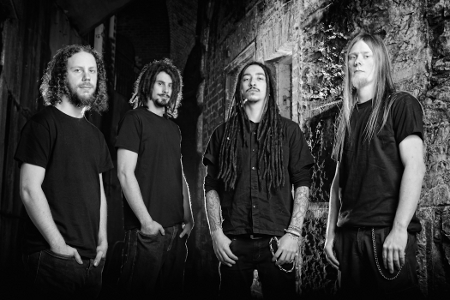 ‘Death March’ sets a blistering pace before Alderman-Broom pulls out a great guitar solo which gets a great reception from the audience. Likewise new song ‘Vultures’ is another really good song that has the heads banging on stage and in the audience – in fact, it’s a wonder that Walker doesn’t come in to contact with the floor at times as he is almost doubled up whilst head banging!

Amongst their best tracks for me was ‘Virus Part 4 – Afterlife’ with its solid guitar riff and it’s another song for which the band give 100% to their performance. This is a band who are surely going places too, and the exposure from this short tour with Beholder can only be good for them.

It might have been their first gig in Scotland but with an appearance at the third annual Les-Fest already in the diary at the end of June, I suspect there will be a few more fans waiting to see them play – myself included. 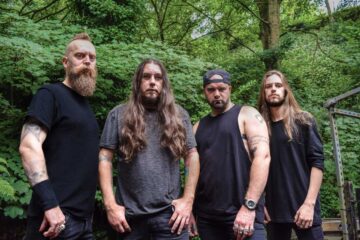